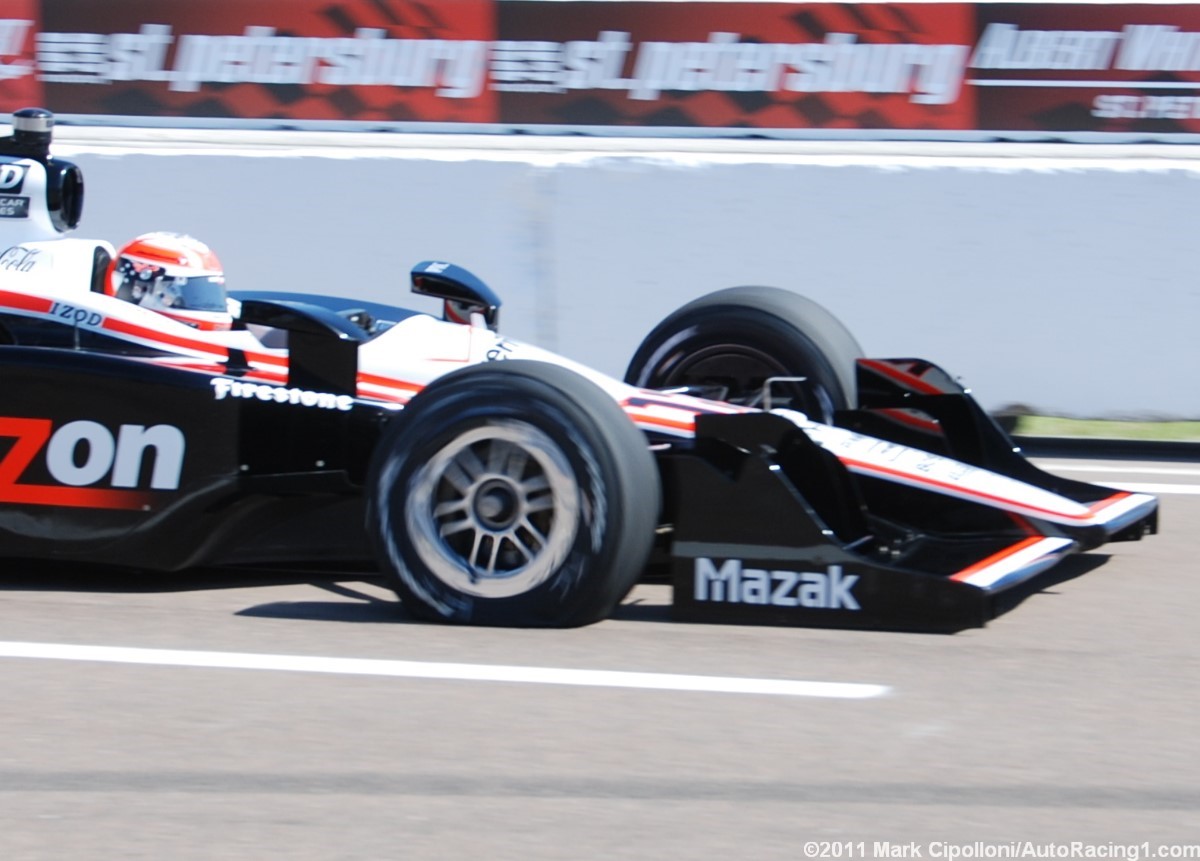 Verizon Team Penske’s Will Power had the fastest lap of the first day of practice Friday for the Honda Grand Prix of St. Petersburg, the season opener for the IZOD IndyCar Series.

Power’s effort led a strong showing by the three-car Penske team, as Ryan Briscoe and Helio Castroneves also posted laps among the top six of the 25-car field. Power was clocked at 1:03.3759 around the 1.8-mile, 14- turn street course in the No. 12 Verizon Team Penske Dallara/Honda.

“I was very surprised to be P1, honestly, “ said Power, the defending pole winner and race winner at St. Pete. “I think I had a bit left in me to show in the Verizon Team Penske car. The car is good, but you can see the competition is getting closer. Now we just have to manage the gap. Qualifying is going to be unbelievably close."

Power brushed the wall earlier in the afternoon session before coming into the pits and then turning the fastest lap of the day. "It was a mixed up session this afternoon," said Power. “I actually brushed the wall on the inside of Turn 8, which gave me a flat tire, but the car was okay. It’s great to have the Verizon car up front today."

Dario Franchitti, the reigning series title-holder, was second with a quick lap of 1:03.5180 in the No. 10 Target Chip Ganassi Racing entry.

There were 16 drivers, however, within one second of Power's No. 12 Verizon Team Penske car, including Mike Conway in the No. 27 Team GoDaddy entry for Andretti Autosport. Conway, who was third (1:03.6660), is making his first start since being injured in the Indianapolis 500 last May.

Action resumes Saturday with a one-hour practice session at 10:10 a.m. ET, before qualifying at 2:30 p.m. ET, culminating with the Firestone Fast Six to determine the pole position for Sunday’s 100-lap race, which will be televised live on ABC at 12:30 p.m. ET.

WILL POWER (No. 12 Verizon Team Penske, fastest of the day): "I was very surprised to be P1, honestly. I think I had a bit left in me to show in the Verizon Team Penske car. It was not a very good session for me, but it's going to be a long weekend. The Verizon car is good, but you can see the competition is getting closer. Now we just have to managed the gap. I think it will be very tough to get in the (Firestone) Fast Six (Saturday). It's going to be unbelievably close." (About early practice session trouble): "I just apexed the wall and ruined a tire. It was still quick."

DARIO FRANCHITTI (No. 10 Target Chip Ganassi Racing, 2nd fastest): "We were really making a lot of big changes today, a lot of changes. Had we been closer at Barber we would have done them there. The Team Target car is pretty good actually. The driver is a little bit rusty. I'm probably about eight tenths right now. I'm going to go back and work with the guys tonight and see what we can come up with tomorrow."

SCOTT DIXON (No. 9 Target Chip Ganassi Racing, fifth-fastest): "I think we are in pretty good shape today. It's a good start for the Target guys. We were happy with our morning session and opted to wait to go out for a bit this afternoon. Looking forward to tomorrow."

HELIO CASTRONEVES (No. 3 Guidepoint Systems Team Penske, sixth-fastest): "Overall, it was a good day for the Guidepoint Systems car. We keep improving and keep getting more data from our teammates – Will and Ryan. At least we finished in the top six at the end of the day. We want to keep moving up the time charts and we'll try to keep doing that tomorrow."

MARCO ANDRETTI (No. 26 Team Venom Energy, seventh-fastest): "The second practice session wasn't as productive as we had hoped for the Venom car. We had a good start this morning and made some good changes from the first session to the second session but didn't find the positive changes we needed during the second session. We'll think over things tonight and get back at it tomorrow."

ORIOL SERVIA (No. 02 Newman/Haas Racing): "My engineer Bruno and I were discussing the progress today and determined that it was just like at the Barber test. When we started the day, I wasn't super happy with the car for the conditions of the track and also I wasn't happy with how I was driving either. We didn't panic and in the second session the track came to us and I started to drive better. We were a lot better than the timesheets show and we will try to prove it tomorrow. I am very happy with the progress we made through the day and am looking forward to tomorrow."

ALEX TAGLIANI (No. 77 Bowers & Wilkins/Sam Schmidt Motorsports): "It's been a challenging day, obviously. We've been struggling with the brakes quite a bit. The brake pedal is going long and somehow we have lots of rear lock-ups in the car. It doesn't allow us to attack the car and track like we want because of the braking. The balance of the car can be fixed, but right now we have so much rear lock-up on entry (into a corner) that our cornering is screwed before we even get in the corner. It's challenging because of that. We did some interesting changes this afternoon, and we learned what direction to go tomorrow. We'll continue to funnel things down and get the best out of qualifying tomorrow. We have a lot of great guys, and I have no doubt by qualifying tomorrow we'll be strong. This is still the same St. Pete. It's bumpy. There are crowns in the road and all the usual challenges of a street course. That's why, when you have a little issue like this (braking problem), it makes it really harder to attack because you're making the corner a lot more challenging."

RYAN HUNTER-REAY (No. 28 DHL/Sun Drop Citrus Soda): "We had a lap good enough for P5 with the DHL/Sun Drop car and then I clipped the right rear tow link, and bent it. With these street circuits, it only takes a mistake of a couple inches and that was enough to sideline us for the rest of the session. We had a good car this morning and we just need to go back to that. Everything looks good."

MIKE CONWAY: (No. 27 Team GoDaddy.com): "I'm fairly happy with that. We were just trying to get through a lot of things, but it was difficult with the yellow flags and so on. But, the GoDaddy.com car has worked well since we got here. It's just a case of chipping away at it every day to get some more speed out of it. I think we've got some good things to try tomorrow morning. We'll try to do our homework tonight and come out a bit stronger tomorrow."

SIMONA DE SILVESTRO (No. 78 Nuclear Clean Air Energy HVM Racing): "I'm happier with the second session. We improved the car a little bit and everything is going great with my new engineer. We're starting to understand each other – I think it's clicked a little more this time. We'll probably have a long night of work tonight but I think we'll be good for tomorrow."

JUSTIN WILSON (No. 22 TranSystems Dreyer & Reinbold): "It was an interesting day. It's not quite the performance we wanted. I felt that we could have been a little bit quicker than that. We haven't quite got a grip on the car and I feel like we are one change away from having a really good car, but we keep trying a few different changes and I haven't found that one change yet.

ANA BEATRIZ (No. 24 Ipiranga Dreyer & Reinbold): "Our goal for today was to keep improving. I know this track and I've done well here in Indy Lights, the difference this time is it's in an IndyCar and it's so much faster. In each session I've just worked on getting up to speed and finding more time every session and every outing. I'm just trying to keep improving and tomorrow we will see how it goes."

TAKUMA SATO (No 5 KV Racing Technology – Lotus): "I like the atmosphere of the race season finally starting and it's a nice feeling to be back in the KV Racing Technology – Lotus car. We have not been on a street circuit since last July in Toronto, so the first session was good fun and I started to get my rhythm back. As the track conditions improved during the second session we struggled a bit with the balance of the car. The good thing is that we split the program between the drivers so we have a lot of data to work with tonight."

E.J. VISO (No. 59 PDVSA – KV Racing Technology – Lotus): "It feels great to be back with the KV Racing Technology team especially now that we are starting this relationship with Lotus. Today has been a productive day for the team. We made good progress with our setups. The morning session was a good one, I finished eighth and I was running as high as fifth, but during the last minute something happened with the car and we brushed the wall. In the second session, the car felt solid at the start of my run, but unfortunately, I went a little wide heading into the last corner and got into the dirt. I couldn't stopped the car and hit the tire barrier which damaged the front suspension, ending my session. I believe, as a team we are in a good position, so I am looking forward to tomorrow's qualifying, it should be a good one."

RYAN BRISCOE (No. 6 IZOD Team Penske): "We had a good day today and we have a good starting point with the IZOD Team Penske car. We did a little fine-tuning, but we didn't need any big changes. The car is fast, so we won't do anything drastic, but we will try to find a little more speed for qualifying tomorrow afternoon. I'm glad to be back to work and I'm looking forward to the race on Sunday."