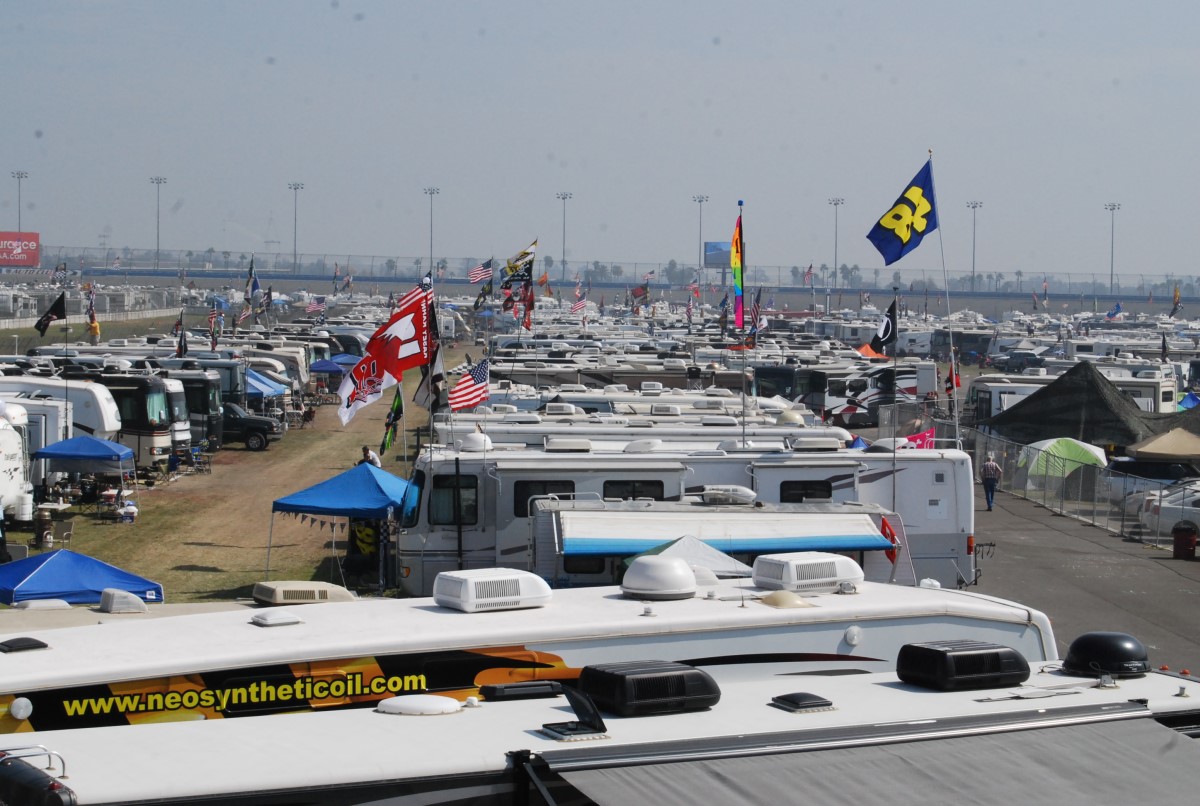 Many of them arrived at Fontana-California early Thursday morning so they could be one of the first to pass through the infield gates of the Auto Club Speedway. Some were driving exotic recreational vehicles, easily valued at six figures plus, that are actually nicer than the homes and apartments that many of us live in. Still others arrived in the old school, tear drop shaped, campers. The type of temporary housing that requires getting out of bed very carefully to avoid a concussion. Everyone of them were thrilled to be there.

Exactly who are these people? They are the mobile residents of "NASCAR City." They are a highly unique breed of race fan who chooses to spend three days at a speedway for the right to combine the two elements of social life they love the most: racing and having a party. In the case of this weekend, literally thousands of them will pack the 1,800 RV spaces, in the Auto Club Speedway's infield, to live that high powered NASCAR experience.

The amenities of the modern day speedway infield has changed over the years. As a youngster in my native South Carolina I spent many weekends camping, at the Darlington Raceway, doing just fine with my two man pup tent and an ice chest. Today's speedways that host NASCAR weekends have seriously gotten into the spirit of presenting their fans the best experience possible. Many of those infields feature temporary grocery stores where fans can purchase the important basic staples such as beer and ice. There's also the availability of food vendors with some infields even offering pizza delivery. My infield experiences now seems like Daniel Boone roughing it in the woods compared to the amenities of these modern times.

First off, the weekend is all about the racing. Throughout the Auto Club Speedway's infield you will see signs, banners and flags letting you know who the fan's favorite drivers are. Many of these flags are on long poles and fly high above the tops of the RV's. Many of them are black flags with the white number three on them in honor of Dale Earnhardt Sr. There are also some confederate flags proudly flying in the breeze because sometimes old habits and philosophies die hard.

One of the more interesting groups you will find there is the Junior Nation: those you strongly support driver Dale Earnhardt Jr. They're very easy to spot because they are adorned in Amp Energy/National Guard clothing from head to toe. They also seem to have a higher level of intensity that separates them from fans of other drivers. It's almost like they believe if they raise a higher level of hell then it will help their driver eradicate that ungodly winless streak.

It's also about the party element this weekend. There will be mega ice chests in the Auto Club Speedway's infield filled with every kind of party juice, both domestic and foreign, that you can name. This will be fortified by large brown bottles with names like Jack, Jim and Johnnie on them. Some of those bottles will be filled with high priced elixirs featuring names that most people can't pronounce.

There will also be plenty of music coming from these campsites with the audio sources being anything from old fashioned boom boxes to lap top computers attached to sophisticated sound systems.. One RV stall will be playing classic country from the likes of Merle Haggard and Hank Williams Jr. The very next site will be blaring the rock classics from Led Zeppelin, Black Sabbath and ZZ Topp. Perhaps the third site will be playing some edgier rock and you might hear Disturbed "getting down with the sickness." It's truly amazing how all of these different sounds seem to blend together while walking through the camping area.

Live music will also be a big part of the weekend in the infield. The Auto Club Speedway has arranged to have four different bands play on a stage appropriately sponsored by Crown Royal Whiskey. It's also rather interesting that, just this past Saturday, there was a press release that named 3 Amigos as the official tequila of the Auto Club Speedway. That should also help fan the party flames to a very hot level.

When the checkered flag falls on the Auto Club 400 late Sunday afternoon the mobile residents of NASCAR City will somehow find the energy to pack up their gear. They will next line up at the infield gate to begin their journey home. Many of them will have literally hundreds of miles to drive Sunday before they see their front doors again.

Despite three days of race track parties, they will find the energy to be at work on Monday morning. They will find the enthusiasm to stand in the employee break room and tell co workers about how much fun they had and how they can't wait to do it again. When they return home after work, many of them will be in a state of exhaustion and will go to bed at 730 pm. That's okay. They've earned that right.

God bless them one and all. NASCAR simply wouldn't be able to function without them.