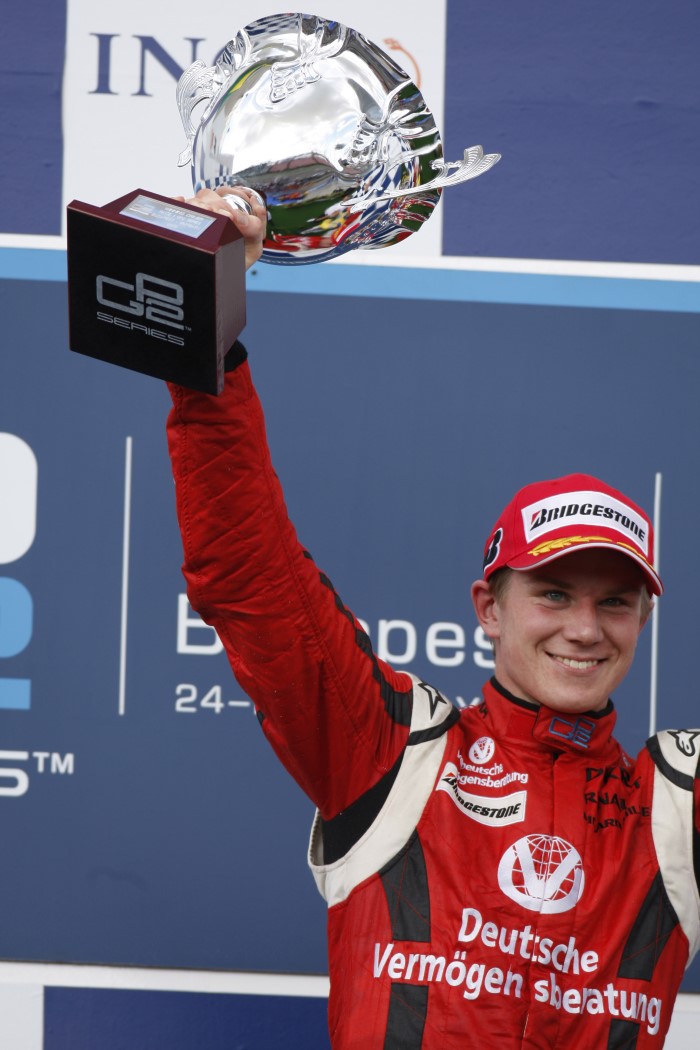 Nico HÃ¼lkenberg repeated his dominant form from the Nurburgring by easily claiming his third win in a row today at the Hungaroring ahead of Lucas di Grassi and Javier Villa, stretching out his lead in the championship as he gave his rivals a racing lesson this afternoon.

The German made a strong start when the lights went out, moving up two places to third behind poleman di Grassi and Villa, with front row starter Vitaly Petrov making a slow getaway after being last man to make the grid while Davide Rigon went the other way: the Russian was ninth by the end of the lap while the Italian moved up from ninth on the grid to fourth on the road.

But with the twisting, undulating nature of the circuit making overtaking as difficult as ever it was clear that pitstop strategies were going to be all important, and so it proved: Villa was setting fast laps until he was the first of the front men to make a stop on lap ten, forcing the German to come in on the next lap. He emerged ahead and, with di Grassi coming in one lap later ahead of his rivals, it looked like the race was run.

But that lead was only to last for two corners, as HÃ¼lkenberg made a brave move around the outside at turn two and achieved the impossible by overtaking di Grassi for the effective lead of the race. As the drivers ahead of them eventually pulled into the pits the German pulled away from his rivals, none of whom could stay within sight.

The final result was never in doubt: as the laps rolled away it was HÃ¼lkenberg who was first to the checkered flag, 15 seconds ahead of di Grassi who lead Villa across the line by a second. Behind them Pastor Maldonado held on for fourth after pushing a little too hard on the penultimate lap to get on the podium and just won the drag race to the line with Davide Valsecchi, who was rewarded with fifth after running around the outside of Luca Filippi at turn one late in the race, with Giedo van der Garde in seventh and Davide Rigon claiming Trident's first point of the season in eighth.

As title rivals Romain Grosjean and Vitaly Petrov both finished out of the points, with the Frenchman slicing up to tenth from last on the grid but the Russian retiring midway through the race with a suspected misfiring engine, the smile of HÃ¼lkenberg face was wider than usual: he extended his lead to 57 points, 15 ahead of Grosjean who leads his teammate by one, while di Grassi has now closed up on the pair with 36 points.