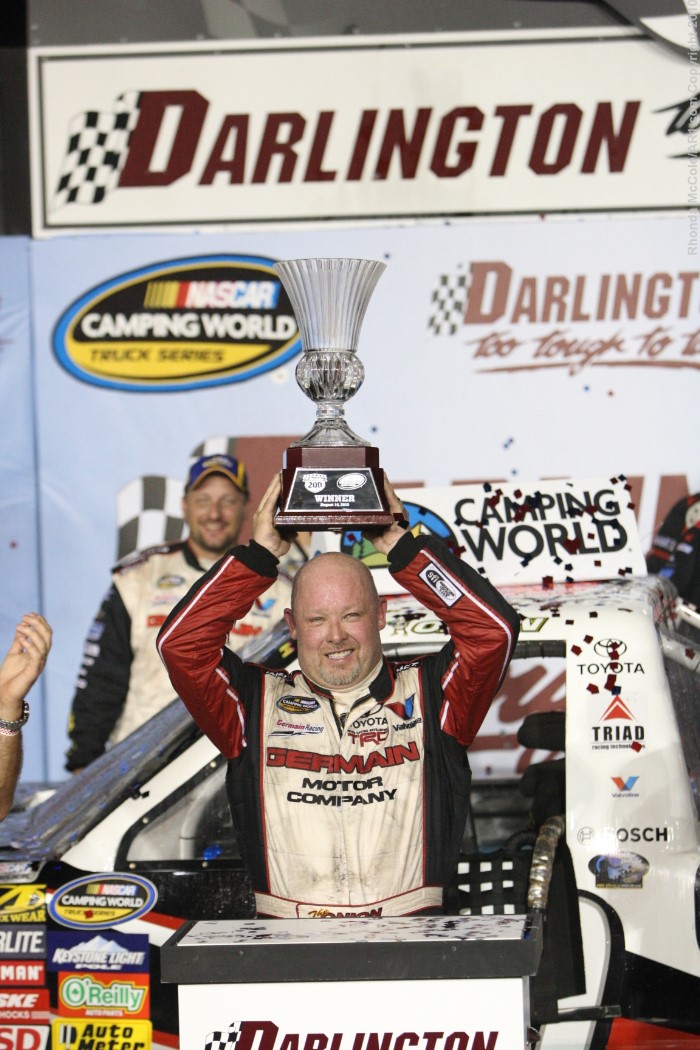 With NASCAR's Sprint Cup and Nationwide Series taking the weekend off the racing spotlight will shine on the NASCAR Camping World Truck Series this Saturday. Anyone who has followed this exciting series since its inception in 1995 already knows they deserve this weekend of attention. The series will be racing this Saturday at the historic Darlington Raceway. The race is the Too Tough To Tame 200 at a venue nicknamed the track too tough to tame featuring drivers in race trucks that are absolutely too tough to tame. In short, the race is going to be very exciting.

Like the other two national touring series, the NASCAR Camping World Truck Series is also on the new 43 to 1 championship points system. Going into next Saturday's race there are only 14 points separating first to tenth in the standings. Matt Crafton currently sits on top of those standings but only has a mere one point lead over Clay Rogers.

34 year old Matt Crafton, the driver of the #34 Thorsport Chevrolet, entered his first truck series race back in 2000 and has been a fixture on the circuit ever since. He will be making his 250th consecutive series start at Darlington this Saturday night. The Tulare-California native knows that it's way too early in the season to be getting wrapped up in points standings but he also knows he needs wins and consistent finishes to insure that he's a championship player later in the year. What Crafton would really like to do at Darlington is rid himself of that 71 race winless streak.

Team owners Duke and Rhonda Thorson also have a lengthy tenure in the NASCAR Camping World Truck Series. They are the longest tenured and active owners in the series. Thorsport made its series debut back in 1996 and became full time participants in 1998. Long time sponsor Menards Home Improvement Stores returned as the team's primary sponsor for the tenth season making that the longest owner/sponsor relationship in series history. Thorsport also has the distinction of being one of the few teams, in a NASCAR national touring series, that is not headquartered near the Charlotte-North Carolina area. The team operates out of shops located in Sandusky-Ohio.

It's very well known that Kyle Busch seems to make a personal assault on some sort of NASCAR record during practically every weekend that he races. Driving his self owned Kyle Busch Motorsports Toyota, he won last week's truck race at Phoenix and became the fastest driver to reach 25 series win in the shortest amount of time. Busch pulled off that feat in 87 starts. He's also won four of his last six starts in the truck series.

However Kyle Busch will not be breaking any series records at Darlington this Saturday. That's because he won't be there. He taking some time off for a mini vacation with his lovely wife. That's the good news for the competition in the NASCAR Camping World Truck Series. The bad news is the fact that Busch has his absence more than covered. He's putting driver Kasey Kahne behind the wheel of his #18 Toyota this Saturday.

Last week, during the NASCAR Nationwide Series event at Las Vegas, Kevin Harvick Inc took the green flag for their 300th series start. This Saturday they will also be making their 300th start in NASCAR's Camping World Truck Series at Darlington. These milestones follow KHI's recent celebration of their tenth anniversary. This organization's accomplishments in the truck series are most impressive. In 299 starts they have amassed 33 wins, 119 top five finishes, 177 top ten finishes and two series championships.

The team will make their 300th start this weekend with a trio of Chevrolet Trucks led by four time series' champion Ron Hornaday Jr who will be joined by his full time team mate Nelson Piquet Jr. Elliott Sadler, KHI's full time Nationwide Series driver, will be in their #2 truck this weekend.

KHI will also some very special visitors joining them this weekend in Darlington. They are joining team sponsor Armour Vienna Sausages and the American Marketing Group in a show of support of the Wounded Warrior Project. They will host 50 plus veterans, from North and South Carolina, and treat them to a VIP racing weekend. The Wounded Warrior Project is a non profit organization whose mission is to honor and empower wounded warriors of the United States Armed Forces.

The race has 39 entries vying for 36 starting berths. 13 of those entries are on the go or go home list meaning they do not have a guaranteed starting berth in the race because they are currently outside of the top 25 in the series' owner's points. These teams will have to rely on qualifying speed in order to race on Saturday.

Among the go or go home teams are former series champions Ron Hornaday Jr and Mike Skinner. They can use a past champion's provisional to earn a start in the race if needed. At the beginning of this year, owner's points earned by Hornaday from the 2010 season were transferred to his team mate, Nelson Piquet Jr, and that's why he's on the go or go home list. Skinner is on the list because he's driving for a new start up team that didn't accrue owner's points from last year.

The Too Tough To Tame 200 will be broadcast live by the SPEED Channel beginning at 430 pm eastern time.