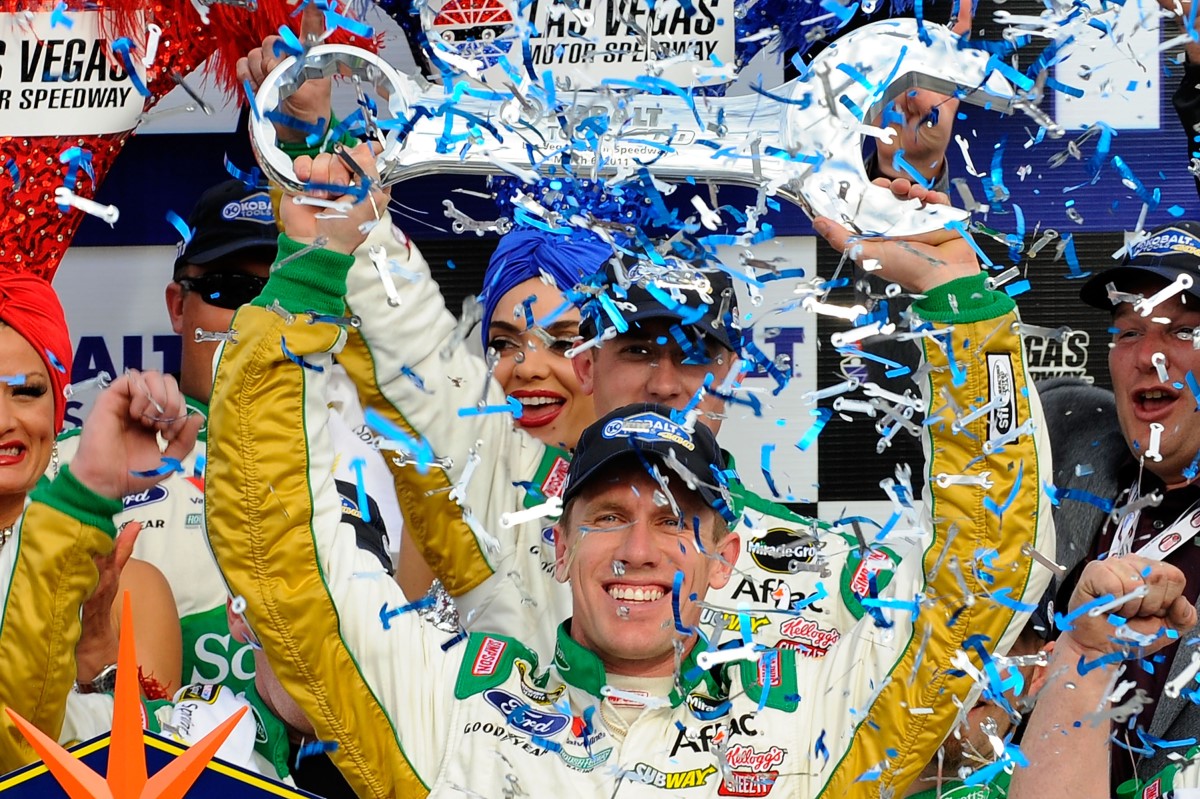 A mistake in the pits by Tony Stewart’s crew gave Carl Edwards the chance he needed to put the frustration of the first two NASCAR Sprint Cup Series races of the season behind him.

Capitalizing on a penalty to Stewart, who dragged an air wrench from his stall under caution on Lap 155, Edwards powered his No. 99 Ford across the finish line 1.246 seconds ahead of Stewart’s No. 14 Chevrolet in Sunday’s Kobalt Tools 400 at Las Vegas Motor Speedway.

The victory was an effective salve to the disappointment Edwards felt after finishing second in the Feb. 20 Daytona 500 and having his pole-winning car knocked into the fence early in last week’s race at Phoenix.

Edwards took the lead from Stewart during a cycle of pit stops late in the race. Stewart, who had taken two tires in a track-position play on his previous stop, had to pit early for four tires during the final run.

Edwards had the luxury of taking two tires on his last stop, and that gave him the margin he needed to beat the fast-closing Stewart and third-place Juan Pablo Montoya to the finish line.

The victory was the 19th of Edwards’ career and his third in the past five races, dating to Phoenix in November.

"This means a lot, coming off Phoenix," said Edwards, who led the final 23 laps. "After last weekend, I had no clue—I just didn’t know how things were going to go from there. You don’t get a good racecar like that very often, but I had another one today.

"I’ve got to thank the Air Force, the Thunderbirds. They let me fly with them on Thursday, and this trophy is going over there in that hangar (a reference to nearby Nellis Air Force Base). They taught me a lot about discipline and about believing in what you do. I can’t thank them enough."

Stewart restarted 24th on Lap 157 after his pit-road penalty, but the two-tire call on Lap 198 (under caution after Jeff Gordon’s Chevy pounded the Turn 4 wall), returned Stewart to the lead, and the No. 14 Chevrolet was good enough to pull away from cars with four tires.

With 40 laps left in the race, Stewart held a 3.5-second lead over Montoya, his closest pursuer. Stewart, however, knew it wouldn’t last.

"I don’t know what happened on the pit stop there, but we had a miscue and had a penalty and had to go to the back, and unfortunately it kind of dealt our cards for us," said Stewart, who led 163 of 267 laps. "(Crew chief) Darian (Grubb) made a good call getting us the track position back, but it also showed everybody else that they could do it, too, and we couldn’t run 2 1/2 runs on a set of left-side tires."

Stewart found little consolation in having the fastest car and heading for the fourth race of the season, March 20 at Bristol, tied for the series points lead with Kurt Busch.

"It kills me to throw a race away like that, especially at a place we haven’t won at yet," Stewart said. "This was a big deal today, and when you lead that many laps and have a car that’s that fast and you lose it … I’m sure tomorrow when the emotion dies down we’ll look back and say it was a great weekend. But, man, it does not sit good right now."

The race went awry early for polesitter Matt Kenseth, who came to the pits with a cut tire on Lap 13 and lost a lap. During a long green-flag run that followed a restart on Lap 19, Kenseth was trapped one lap down as Stewart, then the leader, began lapping back markers.

Not until Lap 201 did Kenseth get his lap back as the lucky dog, the highest-scored lapped car. By then, Roush Fenway Racing teammate Greg Biffle also had fallen off the lead lap after running out of gas because of a pit-road fueling mistake.

Kenseth’s and Biffle’s issues, however, weren’t as dire as those of Kyle Busch, who entered the race as the series points leader. The engine in Busch’s No. 18 Toyota detonated on Lap 108, spewing flames from beneath the car.

"On the restart there (on Lap 107), I was going to bide my time and try to get back through traffic with plenty of time to go, and ‘kablooey’—it just broke," Busch said.

Busch finished 38th and fell to 14th in the standings.

Notes: Earnhardt scored his second straight top 10 and climbed from 17th to 10th in the series standings. … Kenseth rallied to finish 11th. … Five-time defending Cup champion Jimmie Johnson fell a lap down when Stewart passed him on Lap 91 but rebounded to run 16th. … Kevin Harvick worked his way into the top five from the 26th starting position, but a pit-road speeding penalty cost him dearly. Harvick finished 17th and is 20th in points.