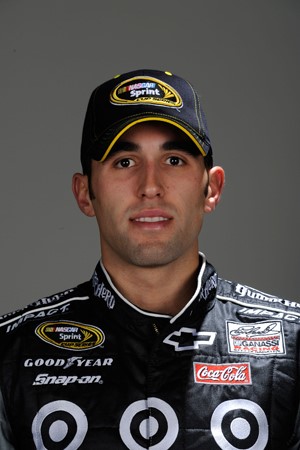 This rumor is upgraded to 'fact' with this announcement. Richard Petty Motorsports announced today that Aric Almirola will drive the legendary #43 Ford Fusion in NASCAR Sprint Cup Series competition beginning in 2012. Almirola has made 35 starts in the Sprint Cup Series, his most recent stint coming in 2010 when he finished the last five races of the season in the #9 Ford. During the final race of the season at Homestead-Miami Speedway, Almirola posted a career-high, fourth-place effort. Almirola drove a JR Motorsports entry in the NASCAR Nationwide Series in 2011 and capped off a successful season with a fourth-place finish in the championship point standings. "One of the things I am most excited about is to have the chance to drive a car as iconic as the #43," stated Almirola. "There is so much history surrounding that number and to have my name above the door will be really special for me. This is the first real opportunity I've had to drive in the Cup Series full time. Last year the #43 team had a lot of speed and was competitive on a weekly basis. Greg Erwin is a great crew chief and I'm excited to work with him. Everyone at Richard Petty Motorsports has a lot of enthusiasm and drive and I'm really looking forward to getting to work."

Almirola will join a team that is poised to compete for a spot in the 2012 Chase for the NASCAR Sprint Cup. Paired with veteran Crew Chief Greg Erwin, Almirola will get behind the wheel for a team that earned one top-five and 10 top-10 finishes in 2011 en route to a 15th-place finish in the owner point standings.

"We are thrilled to welcome Aric Almirola into the RPM family," said team Co-owner Richard Petty. "We feel extremely fortunate to have had a number of very talented drivers interested in joining our organization, but ultimately we felt Aric would be the best fit for the team and for our current and potential partners. We have had the chance to watch his progress for the past several years and we had success with him in the past. We are really confident in his potential as a NASCAR Sprint Cup Series driver. We think Aric has all the makings to be the next bright star in our sport." Richard Petty Motorsports

12/30/11 UPDATE This rumor is upgraded to 'strong' today. Aric Almirola is the top candidate to take over the seat of the famed No. 43 car with Smithfield Foods as his sponsor at Richard Petty Motorsports.

Fourth in the Nationwide Series points standings in 2011, Almirola had another year left in his contract with JR Motorsports but could obtain his release, according to sources, to go to RPM.

A JR Motorsports spokesman would not comment on Almirola’s status with the team and an RPM spokesman did not return requests for comment.

Almirola would not be able to drive for RPM, which Ford has heavily invested in, and continue to drive for the Chevy-backed JRM at the same time.

The Almirola-RPM deal is not complete, sources said, but JRM already has talked to drivers about his replacement for the Nationwide Series ride. David Ragan, Reed Sorenson and Cole Whitt are among the top candidates.

The 27-year-old Almirola has 35 career Cup starts. His best finish came at Homestead in 2010 when he finished fourth while driving for RPM. It was his fifth race in five career starts at RPM, where he had replaced Kasey Kahne after Kahne was released to join Red Bull Racing.

RPM officials liked Almirola’s performance in the car as he started 13th at Texas and ninth at Phoenix. He had one other top-20 finish, a 20th at Talladega.

That made him one of the top candidates to replace AJ Allmendinger, who left the team last week for Penske Racing to replace Kurt Busch.

12/24/11 Aric Almirola, who finished fourth in points in the Nationwide Series this season, has emerged as the leading candidate to take over the legendary No. 43 for Richard Petty Motorsports in the Sprint Cup Series in 2012, the Observer has learned. The deal, which has come together very quickly, will be announced after the Christmas and New Year's holidays and will include a sponsor announcement, multiple sources confirmed Friday night.

Almirola was set to begin his second full Nationwide Series season with JR Motorsports' No. 88 team in 2012, but his move to the Cup series now leaves his future with that organization unclear. A spokesperson for RPM said Friday night the organization did plan to make a driver announcement for the No. 43 after the holidays but would have no other comment at this time.

In 34 Nationwide starts this season with the No. 88, which is co-owned by Cup driver Dale Earnhardt Jr., Almirola had seven top-five and 18 top-10 finishes and won one pole. In 73 starts, he has one Nationwide win to his credit, in a 2007 race at Milwaukee when he started but Denny Hamlin finished. Almirola, 27, has made 35 starts in the Cup series with a best finish of fourth at Homestead, Fla., in 2010, ironically also driving for RPM in its No. 9 Ford. A native of Tampa, Fla., the Cuban-American became one of the first drivers to participate in NASCAR's Drive for Diversity program in 2004.He also has 75 starts and two wins in the Truck series. RPM recently announced it had lost sponsor Best Buy to Roush Racing and then driver A.J. Allmendinger was hired away by Penske Racing.

RPM officials have insisted they would continue to field two Cup cars in 2012 – the No. 9 driven by Marcos Ambrose and the No. 43. ThatsRacin