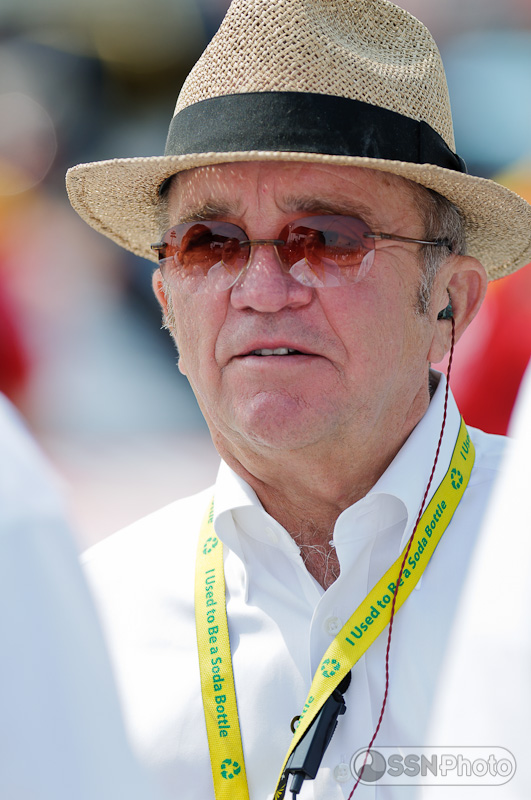 This rumor is upgraded to 'strong' today. Roush Fenway Racing expects to shrink from four full-time Sprint Cup cars to three in 2012. "The most likely scenario is three,'' RFR president Steve Newmark said before Sunday's race at Martinsville Speedway. "We're still plugging away at the fourth, but we all recognize the realities that when you're this late in the season it makes it more difficult to secure that. Only the #99 car of Carl Edwards and #16 of Greg Biffle is fully sponsored for next season. The #17 of 2003 Cup champion Matt Kenseth has no sponsorship for 2012, and Newmark said "nothing is eminent'' but added RFR is prepared to run that car unsponsored if necessary. Newmark said the #6 car driven by David Ragan could run limited races but was non-committal on whether Ragan, Nationwide Series points leader Ricky Stenhouse Jr. or Trevor Bayne — or a combination of two or three — would get those races. He said the plan is for Bayne, the defending Daytona 500 champion, to run a limited Cup schedule in the #21 for the Wood Brothers. Newmark said RFR hopes to field two Nationwide Series cars, with at least one of them fully sponsored. No decision has been made on who would fill those seats, although Stenhouse has been promised a ride for RFR next season. ESPN

10/07/11 This week Jack Roush addressed the topic of Roush Fenway Racing dropping from a four-car to a three-car team in a SiriusXM Satellite Radio interview. "We're looking for a sponsor for #6-David (Ragan), but right now I can't tell you who that's gonna be," Roush told host Claire B. Lang. "I'll say that I'm not real close on it. So David has not been encouraged to not talk to other teams going forward for things that they might have or an interest because right now I don't see how I'm gonna run the fourth car unless things turn dramatically." Greg Biffle, Carl Edwards and Matt Kenseth are RFR's other Cup drivers. Roush said he expected to remain active in the Nationwide Series but more likely with two cars than three. He has self-funded in large part the programs of Trevor Bayne (who won the Daytona 500) and Ricky Stenhouse Jr. (who is on pace to win the Nationwide title), and even Edwards hasn't had full backing. Milwaukee Journal Sentinel