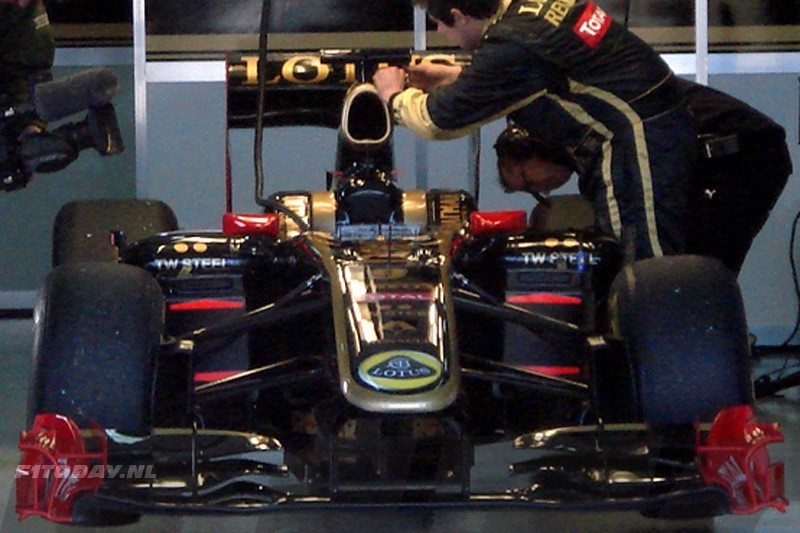 The rebranding of the current Team Lotus and Renault teams as Caterham and Lotus respectively looks set to go ahead this winter, with leading rivals indicating that they have no opposition to the move.

Changes of entrant name have to be approved by a majority of the Formula 1 Commission, but Red Bull, Mercedes and McLaren bosses Christian Horner, Ross Brawn and Martin Whitmarsh have already vowed not to stand in the two squads' way.

The name change requests are a legacy of the dispute over the rights to use the Lotus name in F1.

The erstwhile works Renault team, owned these days by the Genii organization, are set to become Lotus as part of their partnership with the Lotus car company, while the present Lotus F1 team will relinquish their claim on the title and become Caterham following their owners' purchase of the British sportscar marque.

Whitmarsh said that while he understood the desire to prevent F1 teams changing identity too often, in this case he felt it was better for the sport for the Team Lotus-Renault/Lotus Renault GP clash to be resolved.

"Philosophically, I can understand the desire to retain names and Ferrari, McLaren hopefully, proud brands, are not going to plan to change, so I understand that but I think also that we've got to recognize that we're in a commercial environment," said the McLaren chief.

"I think it makes a lot of sense that for there to be two Lotus teams in the sport doesn't seem very sensible."

Horner agreed, pointing out that Renault was also a misleading team name now that the French firm was just the engine supplier, but he felt it was good that changing names was not too easy for F1 teams.

"On one side, it doesn't make any sense for a team to be called Renault when it isn't Renault," said Horner.

"I think that where Formula 1 needs to be a little bit careful is that the teams are brands and when the promoter is selling Formula 1 around the world, can sell Ferrari, can sell McLaren and now sell Red Bull Racing and Mercedes – they are all strong brand names.

"I think it's something to perhaps consider for the future, that there needs to be more careful consideration given to the names of teams and the mechanism by which they can be changed.

"If there's a logical, sensible reason then why not, but I think we also have to be careful that it just doesn't end up in a merry-go-round and companies that have the same company number just change effectively entrant name on a yearly or biannual basis." ITV Sport

10/09/11 (GMM) Team boss Eric Boullier has confirmed that Renault plans to change its name for the 2012 season. With there currently being a team called Team Lotus competing against Group Lotus-sponsored Renault, the parties have been seeking a solution.

It appears the plans are for Team Lotus to adopt the name of owner Tony Fernandes' carmaker Caterham for next season, with Renault becoming the sole Lotus.

But name changes are not encouraged in F1, meaning that the proposal will need to be approved by the sport's F1 Commission.

It is believed some teams, like Sauber who were called BMW-Sauber long after the German marque's withdrawal, expressed caution when asked to approve the Lotus solution.

"Name changes aren't something that should be encouraged," agreed FOTA chairman Martin Whitmarsh.

"But if you've got two Lotus names in formula one it strikes me that isn't desirable, it's not what people really need or want in the sport," the McLaren boss told Reuters.

Boullier is confident the matter will be resolved by the time of the World Motor Sport Council's December meeting.

"It's just two team name changes at the same time and some people want to make sure it's done with the right process and the right purpose. That's it, nothing else," he said.

09/25/11 Team Lotus' plan to be renamed as Caterham next year has moved a step closer, after the squad was told ahead of the Singapore Grand Prix that its efforts would not be blocked by rival teams.

For the name change to happen, Fernandes will need support from 18 members of the 26-strong F1 Commission, which is made up of teams, Bernie Ecclestone, Jean Todt and representatives of race promoters, engine manufacturers and sponsors.

With high-level sources confirming that FOTA's members, which are all the F1 teams other than HRT, indicated they would support the move, the path is now clear for Fernandes to lodge an official request with the F1 Commission. This could happen in the next few weeks, so that the name change to Caterham is formally ratified prior to the issuing of the 2012 entry list, which normally happens at the end of November. Racer.com

08/26/11 (GMM) Tony Fernandes' formula one team will probably be renamed 'Caterham Team AirAsia' ahead of the 2012 season.

And Turun Sanomat correspondent Heikki Kulta also reports that, as the long naming dispute with Proton's Group Lotus comes to an end, the Lotus logo will be removed from the green T128 cars with almost immediate effect.

Kulta said the logos will still be seen on the Team Lotus cars this weekend but not at Monza in two weeks.