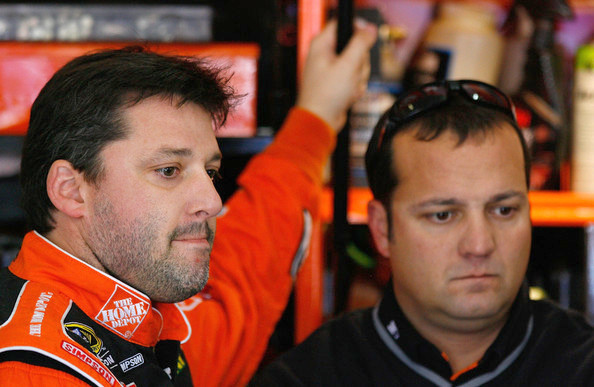 UPDATE #2 A rough start to a season that began with high expectations has Greg Zipadelli admittedly unhappy right now. But the crew chief downplayed speculation that he's so upset with how Joey Logano has been running he's considering reuniting with Tony Stewart. Zipadelli won 33 races and two titles with Stewart, but stayed at Joe Gibbs Racing when the driver left to own a team. Now that Stewart is seeking a director of competition — he fired Bobby Hutchens earlier this month — there's been talk that Zipadelli could move to Stewart-Haas Racing in some capacity. But Zipadelli said he's got two years left on his contract with JGR, and no immediate plans to leave the organization. "I love Tony, he's as close to me as my brother," Zipadelli said. "But that doesn't mean anything. I love the organization I work for, they've been very positive and very supportive for over 13 years. I learned a long time ago to never say never in this sport about anything." Stewart, while not speaking specifically about Zipadelli, said SHR isn't close to hiring a new competition director. "We haven't got anywhere yet. We are still looking at our options," he said. "It would be nice to have a person in that position. We definitely want to get that role filled. At the same time, we want to make sure just like we did when we hired Bobby, we want to make sure we're hiring the right person. So we'll take our time on it." Associated Press

06/22/11 This rumor is downgraded to 'false' today. "I laughed when I saw that," Stewart said. "It's not the first time I've read something that's not true." Sports Illustrated

06/21/11 Rumor has it that Greg Zipadelli, currently the crew chief for Joey Logano, is tired of trying to make Logano a race winner. Word is he could be headed to Stewart-Haas Racing to take over as the crew chief for Tony Stewart, who he won two Sprint Cup titles with in 2002 and 2005 in the Home Depot Gibbs racing car.