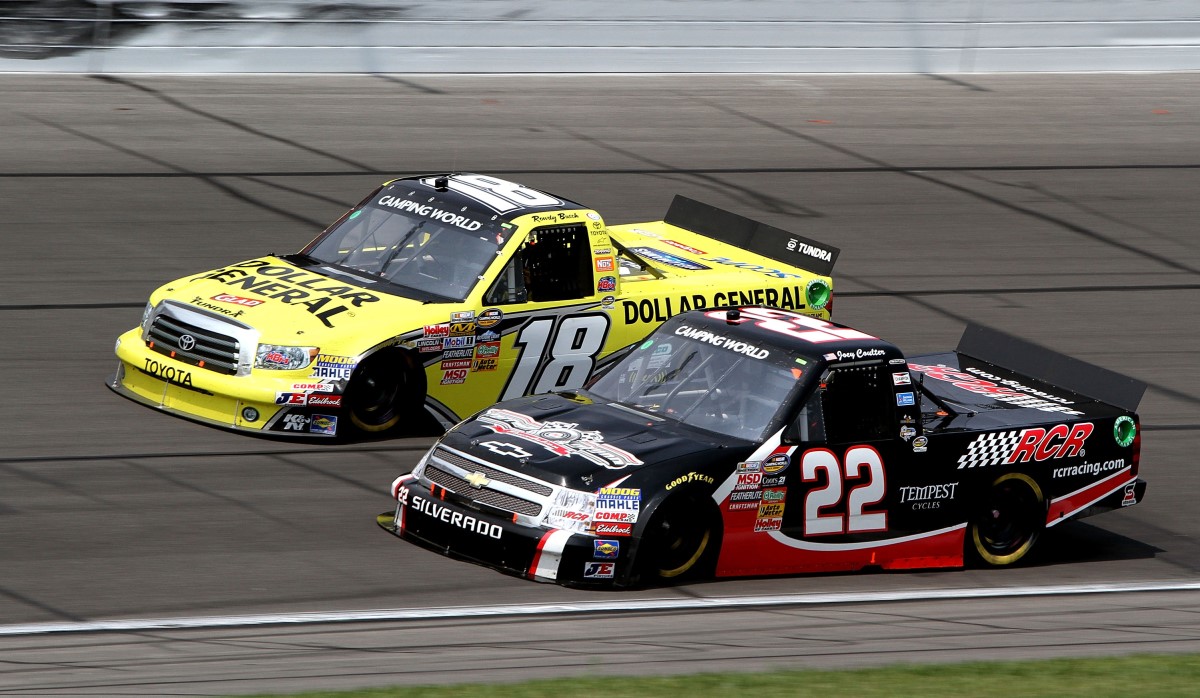 UPDATE #2 None of the principals have confirmed it, but Ray Dunlap, pit reporter for SPEED, was confident in his sources to post a Twitter message that car owner Richard Childress and driver Kyle Busch had a physical altercation after Saturday’s Camping World Truck Series race at Kansas Speedway. “There are some eyewitnesses, crew members who were there and another driver who were right there," Dunlap said Saturday night after he arrived home in Charlotte. “There were some punches thrown."

Kerry Tharp, NASCAR director of communications for competition, said that NASCAR officials were investigating the reports. Officials from Richard Childress Racing and Joe Gibbs Racing, for whom Busch, 26, drives Sprint Cup cars, said there would be no comment until today.

The source of Childress’ frustration was Busch’s damaging the right side of rookie Joey Coulter’s truck during the cool-down lap after Coulter, who finished fifth for Childress’ team, bumped Busch’s car while the two battled for position on the final lap.

“His fender must have got caught in there and tore a bunch of the truck up," Dunlap said. “Richard was aggravated about the fact (Busch) had caused damage postrace, when it wasn’t a racing accident, it was stupidity."

Dunlap said Childress, 65, went to Busch’s garage with the intention of talking to him, but “what my friends who were there told me, said Kyle lipped off to him, and said, ‘Don’t worry about it old man,’ or something like that, and that really fired him up.

“Apparently Childress had him in a headlock," Dunlap said, “and there were multiple punches thrown … but I don’t know if he was hitting him in the face or in the back of the head or what, but they said for sure, it was physical, he did throw physical punches." During postrace interviews on pit road and in the media center, where Coulter was on the podium as the top-finishing rookie, he made light of his trading paint with Busch, who drove beside Coulter after the race.

“According to his spotter, he was saying, ‘Congratulations,’?" Coulter, 20, said with a wry smile of Busch’s postrace bump. “That was a learning experience like no other. It’s amazing the kind of stuff I learned in running behind him and trying to get around him. It seemed like he knew where I was going before I did.

“I hate we got together on the last lap. I had never gotten tight next to somebody, so I was underneath him expecting to get loose, and I get tight and we kind of got together."

Dunlap, who conducts the victory lane interviews, said he did not see any incidents on pit road. “That’s where it usually happens, guys jump out of the truck and have their words there," he said, “but this spilled back into the garage, obviously."

Busch is already on probation through mid-June after an incident with Childress driver Kevin Harvick, who tried to punch Busch following the conclusion of the Sprint Cup race at Darlington Raceway. But Busch got away by ramming Harvick’s parked car into the wall. KansasCity.com

NASCAR’s bad boy
Richard Childress isn’t the only person Kyle Busch has apparently had problems with. Here are a few other incidents involving Busch:

â€¢August 2010: Busch admits to intentionally wrecking Brad Keselowski late in a Nationwide race at Bristol Motor Speedway, and celebrates his win by mockingly rubbing his eyes like a crying baby as the crowd showers him with boos.

â€¢November 2010: Busch, angered that he had been called for a pit-lane speeding violation, makes an obscene gesture to a NASCAR official in a Sprint Cup race at Texas Motor Speedway.

â€¢May 2011: Busch has a postrace, pit-road confrontation with Kevin Harvick after a Sprint Cup race at Darlington Raceway and goes on probation through June 15.

06/04/11 Richard Childress had an altercation with Kyle Busch in the Camping World Truck Series garage area after the O'Reilly Auto Parts 250, sources confirmed Saturday night. NASCAR spokesman Kerry Tharp confirmed that NASCAR was looking into the rumors of an altercation following the Camping World Truck Series race at Kansas Speedway. The altercation happened in the garage area about 30 minutes after the conclusion of the race, according to the sources, who indicated that Childress initiated the altercation. Childress likely was upset that late in the race, Richard Childress Racing driver Joey Coulter and Busch had a tight battle for fifth with contact on the final lap. Busch tapped Coulter on the cool-down lap following the race. Scene Daily