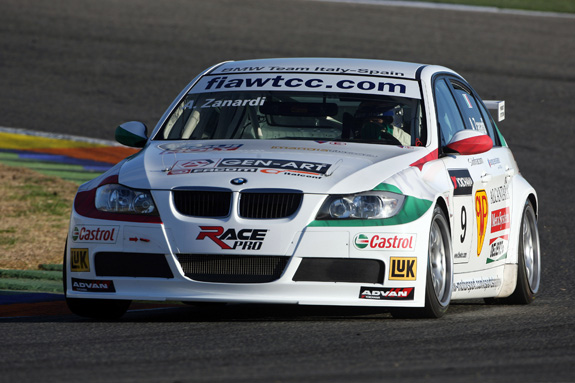 Many drivers have inquired about IndyCar's $5 million bonus offered for winning the season-ending race at Las Vegas Motor Speedway in October. Alex Zanardi has an invitation. The popular two-time CART champion said Friday in a telephone call from Italy that he's considering the opportunity.

"We had a conversation about it," Zanardi said of a recent telephone call from IndyCar CEO Randy Bernard, "but I didn't think he was serious."

Bernard certainly is. With heroes hard to come by, Bernard's goal with the bonus is to bring emotional ties back to the Izod IndyCar Series. No driver fits that better than Zanardi, who won CART titles for Ganassi Racing in 1997 and 1998.

Zanardi lost both legs and most of the blood in his body in a 2001 crash in a CART race in Germany. He was leading when he was forced to make a late pit stop, and he lost control trying to blend back in. Alex Tagliani couldn't avoid him, splitting Zanardi's car in half.

Zanardi not only survived, he has thrived despite limitations. He designed custom-fitted legs to drive race cars again and has won marathons in the handcycle class.

Zanardi, who will be 45 a week after the Oct. 16 race, didn't rule out Bernard's offer, but he didn't say he would accept, either.

"I'm an old fart now," he said, laughing. "I'd love to be in it, and it's one thing to talk about it, another to put it together and do it."

IndyCar champion Dario Franchitti is a friend and former foe, and he couldn't have been more excited Friday to learn of Zanardi's interest in the Las Vegas race.

Franchitti only wonders if the cockpit area is wide enough for Zanardi's hulking upper body.

"He'd be lucky to get his shoulders in the car," he said. "He was always strong, like an ox or Popeye, and now he's twice that." Indy Star

03/14/11 Rumor in the paddock here at Barber Motorsports Park where the IndyCar series is gathered for preseason testing is that former Champ Car great Alex Zanardi is making inquiries about going for the $5 million prize, possibly in a Ganassi Dallara Honda using hand controls. Since it is an oval, there is no reason why he cannot be competitive.