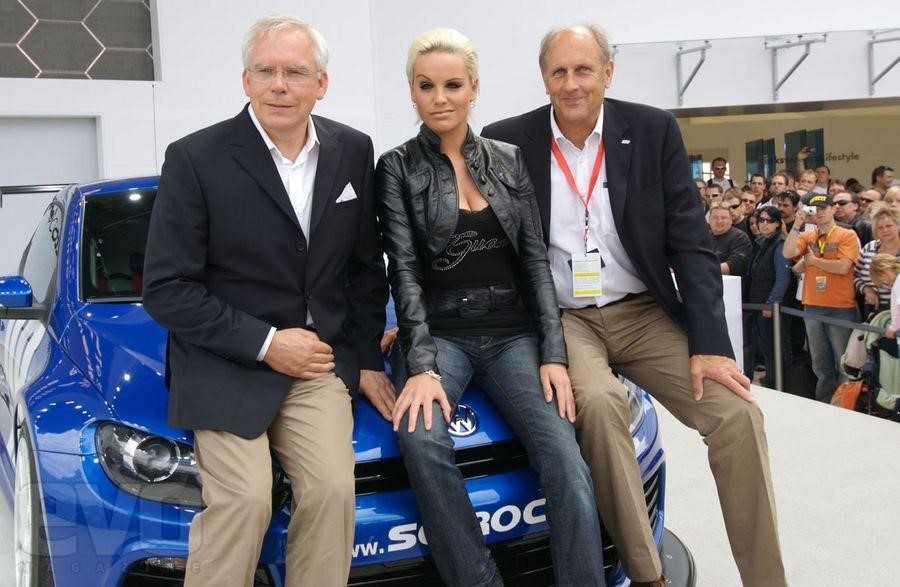 UPDATE #4 This rumor is downgraded to 'false' today. Volkswagen quashed speculation on Thursday that it could expand its motorsport activities to include NASCAR and Formula One. "Nothing for us. There is certainly the one or the other person out there in the world that would wish for that, but we don't have that on the program," said Ulrich Hackenberg, head of technical development at the Volkswagen brand, when asked about NASCAR. "I should know what I am talking about, since it would come out of my budget." He also ruled out any interest in joining Formula One. There has been speculation for months over whether VW would enter NASCAR with a factory team to bolster its appeal in the U.S. market, where it lags Japanese and Korean carmakers by a large margin. Yahoo

11/20/10 A NASCAR official confirmed the sanctioning body has a meeting scheduled with Volkswagen in January. While Volkswagen competition representative Hans-Joachim Stuck emphatically denied any interest in American stock cars at Homestead one year ago, in a recent interview with Financial Times Deutschland the former racer discussed possibly taking the brand to Formula One and NASCAR. Reports earlier this month confirmed VW wouldn't pursue F1 after all. When VW unveiled its new assembly plant in Chattanooga, Tenn., in September, Dr. Martin Winterkorn, chairman of the board of management at Volkswagen AG, announced to 700-plus dealers from the U.S. and Canada that he aspired to take his brand "to the top of the auto industry by 2018." Certainly, NASCAR's "marketing (platform)" could be the perfect vehicle to accomplish that task. VW holds the distinction of being the largest automaker in Europe. In the U.S., however, recent tallies from October show VW of America only holding a 2.1 market share of cars sold, according to the Wall Street Journal. FoxSports

10/26/10 Volkswagen could have a decision over whether to enter Formula1 in 2013 before the year is out after team manufacturer’s motorsport representative Hans-Joachim Stuck revealed talks will be opened in November.

Volkswagen has been tipped to make the move into F1 for several years, either in its own capacity or under the banner of one of its subsidiaries.

While racing as Audi was mooted for some years, a recent collaboration with Porsche could see the legendary German name return to F1 with backing from Volkswagen.

A discussion over these plans is now scheduled to take place next month, with a possible final decision before the year is out, though any planned debut would be no earlier than in 2013 when engine regulations are expected to change.

More immediately, Volkswagen is rumored to be joining the NASCAR series to bolster its image in the key American market.

10/19/10 (GMM) Volkswagen will discuss the possibility of entering formula one during a meeting in November. That is the claim of Hans-Joachim Stuck, the former grand prix driver who is now a motor sport representative for the German auto giant.

Reports recently have suggested that Porsche, or another VW subsidiary Audi, could enter formula one when the engine regulations change in 2013.

According to Financial Times Deutschland, Stuck would not comment on the speculation beyond saying a meeting is scheduled for early November "in which the (company's) strategy will be discussed".

Also reportedly based on Stuck's comments, the report said Volkswagen's participation in the American NASCAR series is more likely.

10/01/10 (GMM) Another fascinating rumor at the Paris motor show is that Porsche could soon be on the formula one grid.

Earlier this year, it was reported the sports car marque's German parent Volkswagen might enter the sport when the engine regulations change in 2013.

At the time, it was suggested that either Audi or Porsche branding was likely.

Porsche's new chief executive Matthias Mueller was asked at the Paris motor show this week whether it made sense for both Porsche and Audi to compete at Le Mans.

"We do not like to both go into LMP1; that is not so funny," he is quoted by Autocar.

"So therefore we have to discuss whether it makes better sense for one of the brands to go into LMP1, and the other brand into formula one. So we will have a round-table to discuss the pros and cons," added Mueller.

Porsche last competed in F1 as an engine supplier to Footwork in 1991.

Mueller also said in Paris that Volkswagen is considering a foray in NASCAR, with talks with the popular American series to reportedly begin after the current season.

Stuttgart-based Porsche's revenues have risen 18 per cent to a record high, totaling EUR 7.8 billion in the latest financial year.