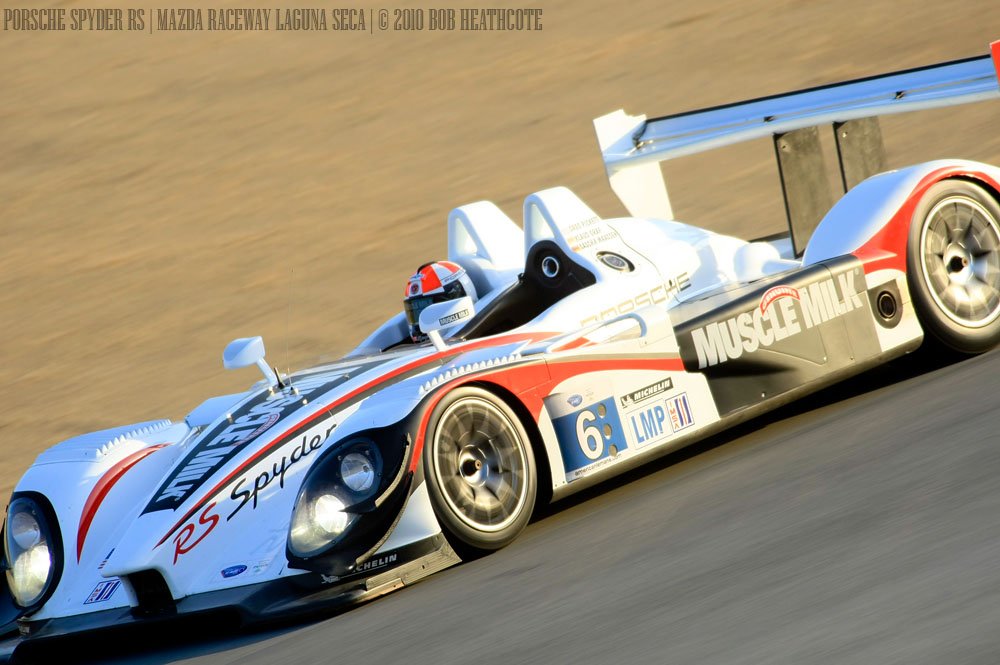 Seeing a Porsche out front at Mazda Raceway Laguna Seca is nothing new. Klaus Graf set the fastest time in Thursday’s test session for the American Le Mans Series Monterey presented by PatrÂ¢n. He set his best lap of 1:15.444 in the Muscle Milk Team CytoSport Porsche RS Spyder, a car that has had tremendous success at the circuit on the Monterey Peninsula.

Graf is teaming with Sascha Maassen – a three-time class winner at the circuit – and Memo Gidley – a late addition to the Muscle Milk lineup. The Porsche RS Spyder has won in class three times at Mazda Raceway since its debut in 2005 and sat on the LMP2 pole position from 2005-07, the last being an overall pole for Maassen.

Graf was just 0.563 seconds better than Clint Field in Intersport Racing’s Lola B06/10-AER. Field turned in a best lap of 1:17.232 in the car that he will share with father Jon – who led overall at Long Beach – and Nikolas Constant. PatrÂ¢n Highcroft Racing’s HPD ARX-01c was third at 1:16.185 – David Brabham’s best time. He is driving with Simon Pagenaud, a winner overall last year with Gil de Ferran, and Marino Franchitti.

Gimmi Bruni quickly found favor with the Mazda Raceway layout. In his first visit to the track, he set the best GT time for Risi Competizione with a lap of 1:23.933. He will drive the Ferrari F430 GT with Jaime Melo. The class was tight yet again with the first six cars within 0.862 seconds. Patrick Long was second in class at 1:24.010 for Flying Lizard Motorsports in his Porsche 911 GT3 RSR. Risi and Flying Lizard are tied for the class championship lead.

In LMPC, Gunnar Jeannette led the way for G-Oil’s Green Earth Team Gunnar with a lap of 1:20.426 (100.177 mph) in the ORECA FLM09 that he will drive with Elton Julian and Christian Zugel. Jeannette and Julian are tied for the class championship lead with Level 5 Motorsports’ Scott Tucker and Christophe Bouchut.

Tom Sutherland was second-quickest in class for Genoa Racing at 1:20.449 (100.148 mph). He is driving with Tom Weickardt and Kyle Marcelli. PR1/Mathiasen Motorsports’ entry was next with a lap of 1:21.265 for Johnny Mowlem; he is teaming with Tom Papadopoulous and Ryan Lewis.

Terry Borcheller went quickest in GT Challenge for GMG Racing. A former GT1 race-winner at Mazda Raceway, his best lap was a 1:28.606 (90.928 mph) in the Porsche 911 GT3 Cup entry that he will drive with James Sofronas and Bret Curtis. Borcheller was a scant 0.049 seconds quicker than Black Swan Racing’s Jeroen Bleekemolen and another 0.251 seconds better than Alex Job Racing’s Butch Leitzinger, a race winner twice already this year with teammate Juan Gonzalez.

The American Le Mans Series Monterey presented by PatrÂ¢n from Mazda Raceway Laguna Seca is a six-hour endurance race set for 2:30 p.m. PT on Saturday, May 22. The full race will be streamed live online at americanlemans.com starting at 5:30 p.m. ET in partnership with TodoCast.tv. CBS Sports will broadcast the event from 1:30 to 3:30 p.m. ET on Saturday, May 29. Live radio coverage will be available on American Le Mans Radio presented by Porsche – a production of Radio Show Limited – as well as Sirius Channel 127 and XM Channel 242. Visit the Series’ schedule page for ticket and accommodation information. Live Timing and Scoring, track schedule, entry list and much, much more will be available on Racehub at americanlemans.com.