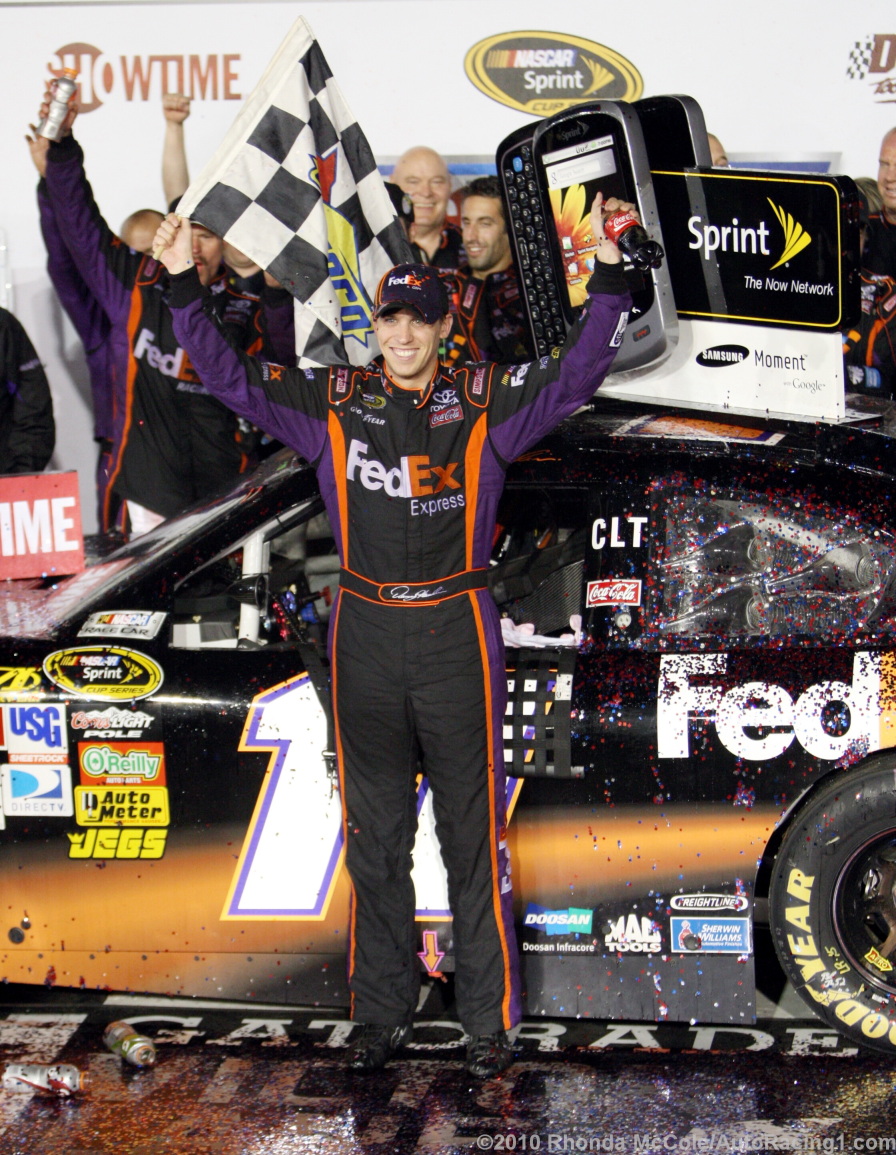 Bum knee and all, Hamlin led the final 24 laps to beat out pole winner Jamie McMurray to become the first driver since Mark Martin in 1993 to complete the weekend sweep at Darlington.

Hamlin’s victory was his first career Darlington victory in the Sprint Cup Series, coming just one day after winning his third consecutive Nationwide Series victory at the track.

“It was a great day for us. To pull off the sweep on Mother’s Day weekend, it was just an unbelievable day for us," said Hamlin. “We had a top-two car all day. Us, Jeff (Gordon) and the other Jeff (Burton) were really strong and we put ourselves in position."

“The pit crew got me out first and that was the key. Mike (Ford, crew chief) just adjusted on the car perfectly and that last two-tire stop was the key for us.

“We set ourselves up for that on the second-to-last stop. We took four (tires) when everyone else took two. I felt like we ended on the best tires and it showed up at the end."

Nursing his left knee, still sore from reconstructive surgery on his ACL in March, Hamlin took off started eighth on the day and hung around the top ten all night, spending most of the last 150 laps trading the lead with Gordon and Burton, both looking to break their winless droughts.

Coming to pit road under the green flag for his final pit stop on lap 342, Gordon missed the entrance to pit road while avoiding the car of Tony Stewart and was forced to come around for another try.

While that was going on, Burton got past Hamlin for the lead moments before Joey Logano spun coming off his green flag pit stop, bringing out the 11th and final caution of the night.

Burton brought the field to pit road under caution, but ended up running over an air hose leaving the pits, earning him a stop-and-go penalty that put him deep in the field.

Hamlin beat everyone off pit road to assume the lead with Kyle Busch and McMurray in tow much as they did in the previous night’s Nationwide Series event.

Unlike Friday night’s performance, Kyle Busch dropped back quickly, done in by an ill-handling racecar that sent him free-falling out of the top five.

With Busch falling back, McMurray sped past and into second place, but was never able to mount a challenge on Hamlin, settling for his second runner-up finish in his last three races.

“At the end there I didn’t have anything for (Hamlin), couldn’t get out car tight enough," said McMurray. “Kind of creeped up on it all night long, could never get the car tight enough to where we could really hustle it. It was always sort of on edge."

“That is what happens when you make a make a mistake," said Gordon. “You have to make it up to your guys who worked so hard all weekend long to give you a race car like that. I made a mistake there and lost the track position. They gave me an awesome car and drove up there to fourth, pretty happy with that."

The track known as “The Lady In Black" claimed her share of victims Saturday night, including Reed Sorenson, A.J. Allmendinger, David Gilliland and defending series champion Jimmie Johnson, who posted his third DNF of the season.

Kevin Harvick finished sixth to maintain his points lead by 110 over Johnson. Kyle Busch came home seventh and holds onto third in the standings. Burton, Ryan Newman and Brian Vickers rounded out the top ten finishers.