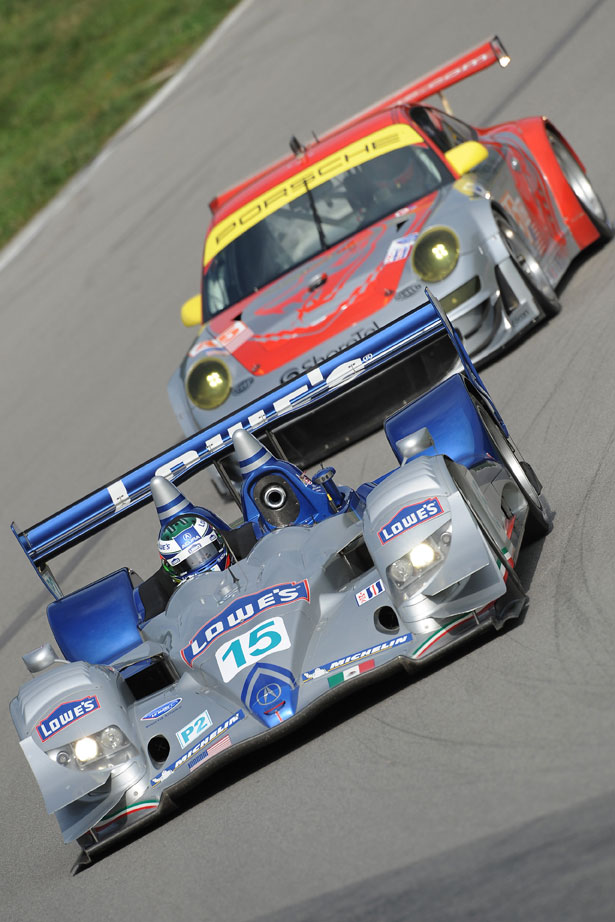 UPDATE #7 Will Acura return in 2010? We hear the simple answer is “no." They’ll lease engines (the teams have already bought their ARX-01 and 02 chassis), but that’s all – support for teams and the series, along with HPD work on further development will mostly disappear. It doesn’t take a lot of reading between the lines of the Fernandez Racing announcement of its demise to come to that conclusion.

This rumor is upgraded to 'strong' today. AR1.com asked Fernandez Racing Team Manager Tom Anderson this morning at Mid-Ohio whether his Acura ALMS team was also looking at an entry in IndyCar. Anderson, "We are trying awful hard to do it. We sure would like to." So it looks like the de Ferran, Sharp/Patron and Fernandez/Lowe's ALMS Acura teams are all trying to put together some sort of IndyCar program for 2010. Mark C.

08/07/09 We heard here at Mid-Ohio today that Scott Sharp (Patron Acura team) has some interest in possibly having his ALMS team also do an Indy 500 effort in 2010.

News that all three of its teams–De Ferran Motorsports, Highcroft Racing and Fernandez Racing–are eyeing a move to the IndyCar Series has fueled speculation that the sports-car effort will come to an end and supports AutoWeek sources that insist that the decision has been made.

Honda Performance Development boss Erik Berkman was unavailable for comment. An Acura spokesman said that an announcement on Acura's 2010 racing plan is tentatively scheduled for early September, possibly prior to Petit Le Mans on Sept. 26.

Acura is understood to be unwilling to continue in LMP1 with De Ferran and Highcroft unless they have real opposition. Acura slashed the P1 development program when it became known last December that Audi would not continue in the ALMS. AutoWeek

Uhh, it's called contracts and cutting costs. I suspect Honda is quite simply pulling the Acura brand from racing and from competition with itself in many respects. Honda's financial woes mirror virtually every other manufacturer involved in the North American automotive market, and quite frankly, I doubt Honda has seen much return on their investment in the ALMS programs. They have contracts with de Ferran and Fernandez, so they might as well pull them in under the Honda banner in the IRL where they both were successful for the duration of their contracts. If I recall correctly, the Acura ALMS program was started prior to the merger of Champ Car and the IRL and provided Honda Motor Company a piece of the road racing market for their upscale brand. Now that the IRL is about evenly mixed with course types, the ALMS is no longer needed to reach that market. Could we see a switch to the Acura brand in the IRL if we see one or more European brands enter the IRL? I also suspect the Honda crystal ball sees increasingly gloomy days for the ALMS with dwindling car counts. I also might add that their chief rival Toyota is pulling the Lexus brand from the Grand Am at the end of this season, but no one writes a thing about that. John Narvell

07/22/09 A reader writes, Dear AR1.com, Acura would leave ALMS due to no competition to compete in a series (IndyCar) with…umm, no competition? At least in ALMS P2 Acura competes against Mazda and now a Porsche (albeit an independent one). I also have heard that there are chassis and aero configurations done by Wirth Research that would optimize and make the ARX-02a competitive at Le Mans. I don’t know if they have been produced for wind tunnel testing but I have it on good authority that it would not take very long. Name Withheld By Request

One would assume that Acura and its teams would not be moving to IndyCar unless at least one more engine manufacturer were coming into IndyCar. One also cannot overlook the exposure the Indy 500 gives a manufacturer. Weakened as it is due to the creation of the IRL and destruction of the very successful CART series, the Indy 500 is still the biggest race in the world. Mark C.

07/21/09 Persistent rumors over the past few months suggest Acura will pull out of the ALMS at the end of this season unless some regular competition materializes.

"It's premature to talk about next year," said HPD's Berkman. "This time last year we had made our decisions about the P1 program. We're trying to do the right thing to keep racing in hopes that maybe we can find a way through. We've got ongoing discussions with our teams."

Meanwhile a veteran team owner and manager with close to forty years experience said at Lime Rock that if no new manufacturers front up with P1 cars for next year IMSA will create an equivalency formula to encourage Grand-Am Daytona prototypes to race in the ALMS.

"It's extremely unlikely that ISC or the Grand-Am will buy the ALMS," this gentlemen commented. "But it's extremely likely that prototype cars from that series will race in this series."

At this point, what the future holds for the ALMS remains unclear. Gordon Kirby

[Editor's Note: We do not see Acura staying in ALMS to lower their standard to race Daytona Prototypes. It would be like watching paint dry. That's just not the Honda way. We keep hearing that de Ferran running in the IRL is still a very real possibility. Supposedly it will be Pagenaud and a second driver, most likely F1 veteran Takuma Sato.]

07/17/09 In May, Duncan Dayton, owner of Danbury, CN -based Patron Highcroft Racing, said he was considering going to the IRL in 2010. In addition, Adrian Fernandez said that if he were to pull out of the ALMS he would likely return to fielding a two-car IRL team, which he said could be less expensive than running his ALMS team.

None of it is news that Lime Rock Park owner Skip Barber wants to hear. The ALMS came to Lime Rock in 2004. Last year, major changes were made to the track layout, specifically geared toward improving racing conditions for the ALMS Prototypes.

"It sure does scare me," Barber said of the economic issues and rising costs. "It certainly makes you pause. I think these guys are going to try to address the costs somehow, but I don't know how. It wouldn't surprise me if there are some fairly significant changes in the [economic model] very soon down the road." Courant News