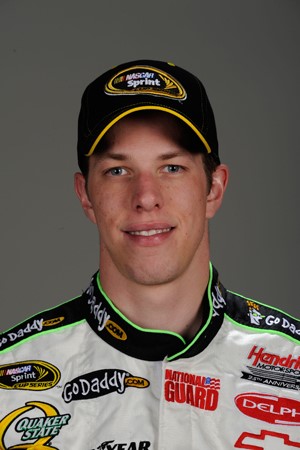 UPDATE #8 This rumor is upgraded to 'fact' with today's announcement by Penske Racing.

08/31/09 Brad Keselowski remained noncommittal this weekend at Circuit Gilles Villeneuve on his future in NASCAR, though he did say an announcement on his plans will come "shortly." Keselowski, a full-time Nationwide Series driver for JR Motorsports and a part-time Sprint Cup driver for Hendrick Motorsports and Phoenix Racing, is rumored to be joining Penske Racing in 2010 – perhaps running both series full time for the team. Keselowski has said he wanted to drive full time in both series, and those plans remain in place. "I'm confident that I will run full time in both series next season," he said. If he joins Penske, he could be a teammate to Justin Allgaier in the Nationwide Series. Allgaier said Saturday he told Penske officials he didn't want to know about the team's plans until they were official. SceneDaily

08/27/09 Brad Keselowski declined to comment on reports he'll drive in the Sprint Cup Series for Penske Racing next year, but he did indicate Thursday to Sporting News he won't be back in JR Motorsports' Nationwide car next season. Asked whether he expected to return to JRM, Keselowski said, "At this time, no," during a boat tour of the Old Port in Montreal. Kelly Bires reportedly is the leading candidate to replace Keselowski in the #88 JRM Chevy. "I heard that, too," Keselowski said when asked about the possibility of Bires driving for JRM. "It's hard to tell. I know they've talked to a number of drivers, and I wish them the best on whoever gets in there, and I expect big things from them, as I'm sure the team does. "I look forward to seeing somebody get the opportunity that I got." Keselowski's departure from JRM lends credence to reports, which surfaced last week at Bristol, that he'll join Penske Racing [with the #12 team]. Team co-owner Dale Earnhardt Jr. has said if Keselowski were to drive a car make other than Chevy in the Cup Series, that would preclude him for driving for JRM's Nationwide program. Sporting News/NASCAR.com

08/27/09 Reports surfaced last week in Bristol that Brad Keselowski was set to replace David Stremme in the three-car Penske Racing Sprint Cup stable next year. ESPN reported on its race telecast Stremme was informing people in the garage area he was out of the ride and looking for employment next season. However, Stremme insists he never made those statements and that no one from the network bothered to ask him directly about his future. Stremme told Sirius NASCAR Radio's The Morning Drive he "feels good about his future and will discuss his plans when the time allows." Keselowski and his current Sprint Cup and Nationwide team owners Rick Hendrick and Dale Earnhardt Jr. have also declined to comment on what lies ahead for the Michigan driver. CBS Sports

08/21/09 Brad Keselowski will drive for Penske Racing in 2010, sources told ESPN.com on Friday. Keselowski would not discuss his future plans. "I'm really not prepared to address any of the rumors about next year," he said. "I'm here to race the Nationwide car and win with it tonight and I am not going to let anything get in the way." Keselowski turned down an offer from Roger Penske last year to drive the #12 Dodge, and the ride instead went to David Stremme. Keselowski's current team, JR Motorsports, does not drive in the Sprint Cup Series and co-owner Dale Earnhardt Jr. has no plans to move that team up to NASCAR's top level. Keselowski had hoped to replace Mark Martin next year in the #5 Chevy for Hendrick Motorsports, but Martin decided to keep the seat in 2010. Rick Hendrick on Friday declined to comment on Keselowski's future, and Earnhardt canceled an afternoon media availability. ESPN.com

08/18/09 Monday, an anonymous tipster spotted driver Brad Keselowski meeting with Roger Penske. The 'tipsters' report: "was doing business at Penske this morning and saw Brad Kesolowski go into the building with a man who appeared to be his agent, the car was still there three hours later when I left. jalopnik.com

07/13/09 Brad Keselowski wasn't kidding when he said he had "options" for next season. In addition to being close to re-signing a deal with JR Motorsports to run in the Nationwide Series, the latest buzz has Special K paired with Red Bull Racing. If Keselowski indeed stays with JRM, the only scenario that would work on the Cup side would be with a Chevy team. Maybe Red Bull is closer to inking a Chevy deal. Rick Hendrick said on Saturday that HMS has the resources to include Red Bull in its engine program. FoxSports

07/12/09 Brad Keselowski's racing team for 2010 is still undecided. The 25-year-old Keselowski hoped a recent meeting with team owner Rick Hendrick would answer some questions about where he'd be racing next season. Keselowski wants a full-time ride next year, and he's optimistic he can stay affiliated with Hendrick Motorsports. He discussed several possibilities with Hendrick, though no final decision was reached. "I have some preferences, but I haven't gotten very far with them," Keselowski said. "I'm not really close on anything." No matter where he ends up, Keselowski felt he would have a full-time ride next season. "I feel pretty confident that's the way it's heading," he said. "It would have to be a big problem to come up for that not to happen." Associated Press

07/11/09 For the second straight season, Brad Keselowski is the top candidate for the #12 Penske Racing Dodge. David Stremme has experienced a couple of miserable weeks at the racetrack and is currently 32nd in the point standings. Keselowski said on Friday he does not have a deal signed for next year. Certainly for a self-proclaimed "Eastsider," partnering with fellow Detroit-based Roger Penske would be an honor. Keselowski was offered the #12 ride last year after Ryan Newman announced he was leaving the ride to join Stewart-Haas Racing. Fox Sports