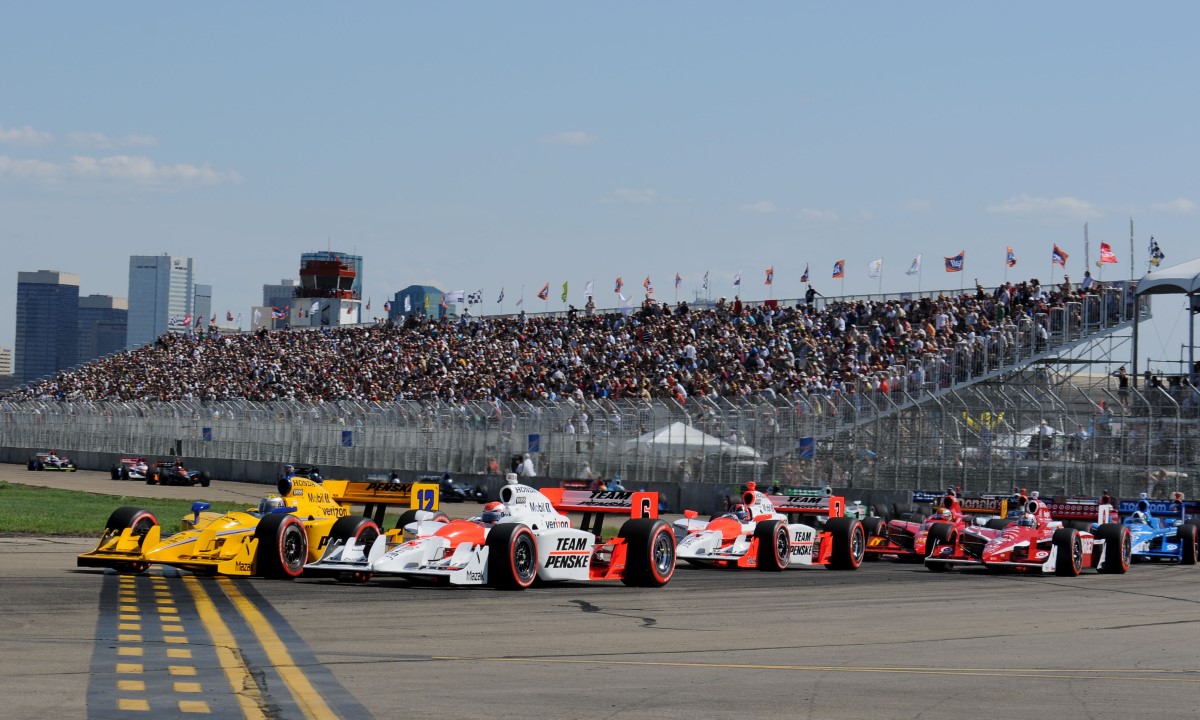 UPDATE Take a deep breath, auto-racing fans. Although the Edmonton City Centre Airport is slated for closure, it may not spell the end of IndyCar racing in the city.

In fact, it may ultimately lead to a more "semi-permanent" site that would save Northlands, owners of the event, millions of dollars every year.

After an early Saturday morning meeting between Northlands and the Indy Racing League, both sides said they were pleased with the discussion and optimistic about the event's future, despite city council's decision to close the airport in the future and develop the site.

Terry Angstadt, IRL commercial division president, said they "couldn't be more pleased" with the meeting, the weekend and the future possibilities. The meeting discussed Northlands' proposal for a two-year extension to their contract, a new date for next year and the possibility of a more permanent-type site for the event.

"What I think is still a bit of an unknown is the destiny of this specific venue," he said. "They(Northlands) seem reasonably optimistic with the information they've been given so far that we'll be able to find more of a permanent venue here. It would need to be tweaked a bit, but not only remain here, but put in certain aspects of permanently that would allow us to put a stake in the ground and be here for a long time."

Northlands major event coordinator Mike Burton said Northlands is hoping that the city's future development of the site will include a "semi-permanent" home for the race that would see the grandstands remain intact. The construction and dismantling of the grandstands are a major expense costing Northlands millions of dollars each year.

"That would be our preference," said Burton, "But it obviously will involve a lot of discussion with the city."

Angstadt said having a site to hold the race on a long-term basis would allow the city and the IRL to "really build on that sense of tradition."

Speaking as he wandered the site Saturday, Burton said Northlands has proposed the 2010 IndyCar schedule, to be released Aug. 1, include July 23-25 dates for the Rexall Edmonton Indy. That would move it to the front end of the 10-day Capital Ex Festival and avoid the Aug. 1 long weekend when fans are more likely to be out of town. It would also avoid clashing with Heritage Days festival and the Big Valley Jamboree.

The races in Toronto and Edmonton would then be back-to-back weekends. This year there was a two-week break between the events. chtv.com

07/09/09 The Edmonton City Centre Airport will eventually be grounded. City council yesterday voted 10-3 to close the gateway — making room for a "transit-oriented" residential and commercial development, which would put the Edmonton IndyCar race in jeopardy unless they move it to a street race. The closure will be done in phases, beginning with one of two runways as early as this year. It could be decades, however, before the airport is completely shuttered.

"Let's not fool ourselves one bit at all," said Mayor Stephen Mandel. "This is a motion to close the airport.

"It might not be tomorrow morning … but it gives us time to find solutions to some of the problems."

Yesterday's decision was part of a last-minute "compromise" brought in by Coun. Ed Gibbons.

It appeared to blindside those councilors pushing to keep the airport open, who unsuccessfully tried blocking Gibbons's motion from being debated.

"I got this motion less than three hours before this hearing," said a frustrated Coun. Linda Sloan, who along with councilors Tony Caterina and Ron Hayter voted against the closure.

Caterina — who raised the issue of expanding service at the airport shortly after being elected in 2007 — asked the matter be referred back to administration for more information, but the idea was quickly shot down.

The plan calls for the city to begin immediate discussions with Edmonton Airports to close runway 16-34.

Negotiations will also begin with NAIT over plans to expand its campus onto airport property.

The NAIT LRT line — still in the planning stages — may also be realigned using some of the freed-up airport land.

Medevac service will continue to use the remaining runway for the foreseeable future, but will at some point be moved to the International Airport or another regional airfield.

A date for the final closure will be determined by city council. Gibbons said that may not occur for another 15 to 35 years. The motion also calls for the city to be the developer of the property.

Cal Nichols, chairman of the Alberta Enterprise Group — which was fighting to save the airport — called the decision "very disappointing," but he declined to comment on any recourse his group may take. "It's just another way to continue to give it its slow death," Nichols said.

"We need to stand back, take a couple of deep breaths … and decide what options are available and where to go from here."

A recent city report suggested the 217 hectares of land near downtown could be transformed into a vibrant, "transit-oriented" community, home to more than 24,000 people, while putting up to $335 million into city coffers.

Meanwhile, Mandel said he wasn't worried about the future of the Edmonton Indy, which is held annually at the airport.

"I don't think that's an issue we have to be overly concerned about," Mandel told reporters. "Who knows if the race will even be here" when the airport is completely decommissioned, he said.

"I mean, races, like all things, have their life expectancy. So, that's a pretty moot point at this time."

In a 1995 referendum, Edmontonians voted to consolidate scheduled air service at the International Airport. Edmonton Sun