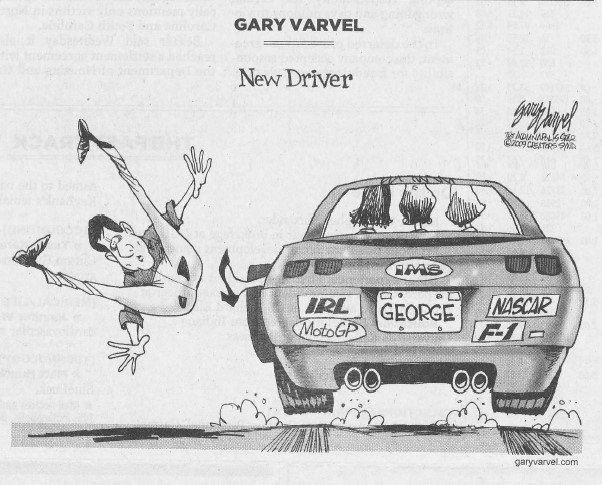 When Wall Street giant Lehman Brothers investment bank collapsed on September 15, 2008, it triggered a collapse on Wall Street that sent the financial world into a tailspin.

And that, more than anything else, is what led to the George’s ouster, not because of the money he spent over the years to upgrade and improve the Indianapolis Motor Speedway, or to bring Formula One to the United States from 2000-2007 or the development of the SAFER Barrier which may be one of the greatest safety innovations in auto racing in our lifetime, but the fact the Hulman George family fortune shrunk with the stock market collapse.

Now, it should be pointed out that the Hulman George family is still wealthy, its financial portfolio is worth less today than it was a year ago. But that can be said about many others who have diversified their holdings with financial investments in the market.

So when George’s sisters, Josie, Nancy and Kathi Conforti started to ask, “Hey, what happened to all of our money?" they couldn’t attack anyone at Wall Street or the United States Government.

The only person they could vent their frustration at was Tony George, who reportedly has spent as much as $600 million since 1996, but it’s likely that amount of money was recouped throughout the years by the gate at the Indianapolis 500 and for many years, the Brickyard 400 before it fell on hard times with declining attendance the past five years.

For anyone who knows the history of the Hulman George family, it can be rather contentious – probably not much different than other families around the globe. But most of those families aren’t rich and money often outweighs family loyalty.

So the sisters turned on Tony. Reports of screaming and shouting in board meetings and family gatherings began to surface. One report that was never substantiated was Josie threw her checkbook at Tony in the May 26 board meeting and screamed, “You’ve spent all my money so here, go ahead and spend the rest of it."

George had already lost his power as CEO after that meeting but when news leaked out that he was ousted, even the sisters had to be surprised at the backlash that followed. George’s mother, Mari Hulman George, issued a statement saying her son was still in power and George met television reporters to say he was still in charge but as the days went on, it became obvious while he still had the title, his decision making power had been stripped. Versus.com