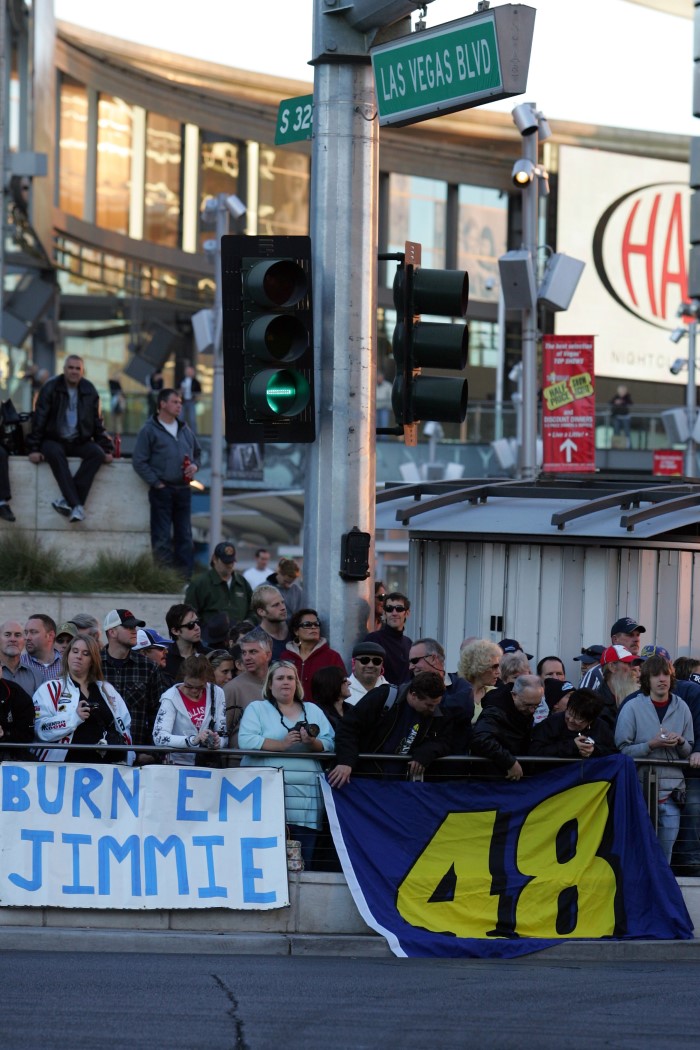 NASCAR’s decision to move its annual NASCAR Sprint Cup Series Champion’s Week activities from New York City to Las Vegas was met with little, if any, resistance. Las Vegas, of course, is one of the most popular tourist destinations in the country, and although everyone loves New York, it did seem to be time for a change of scenery.

It has been more than that; it has brought a change of attitude.

There’s a lot going on, including various media gatherings, a private dinner for the champion, sponsor receptions and the like. Las Vegas Motor Speedway hosted a big fan event on Tuesday. Stock cars are parked in prominent locations on the famous Las Vegas Strip for photo ops. Tony Stewart did a live radio awards show – his yearly “Stewies" — from the Rio Hotel. There’s a lot of action, and it isn’t just in the casinos. Las Vegas is a happening place.

Speaking of the Strip, the city shut the whole thing down for an hour so the top 12 drivers in the Chase for the NASCAR Sprint Cup could take a Victory Lap, complete with pit stops and a burnout from four-time champion Jimmie Johnson.

The Victory Lap is probably Champion’s Week’s most spectacular event. When you’re standing in front of the MGM Grand Hotel with all the bells and whistles of Vegas behind you, fans are lining the streets as far as the eye can see, and then those stock cars fire up in front of you, you can’t help but think things couldn’t get any better.

But they did. Wayne Newton –- who has probably never before been referred to as the icing on the cake but in this case was –- waved the green flag for the Victory Lap. Yes, he’s real.

On Thursday, December 3, the National Motorsports Press Association and Myers Brothers hosted their awards ceremony. Other than the NASCAR Sprint Cup awards dinner, this is the biggest event of the week. It honors, if not exactly the little guy, then the guys who are slightly less large. Officials and crew members have their moment in the spotlight, and proactive sponsors are recognized for their contributions to NASCAR.

Dale Earnhardt, Jr. flew in for the day to pick up the NASCAR NMPA Chex Most Popular Driver Award for the seventh consecutive year. Junior has turned into a pretty good speechmaker. On this day, he talked about his childhood dream –- the dream of so many kids that in this notable case came true –- of growing up to race cars for a living. He thanked the fans, who select the winner of this award, and said, “As long as you keep supporting me, I’ll keep showing up."

Joey Logano, who received Raybestos Rookie of the Year honors, may have delivered the best line of the day. Acknowledging Mark Martin as one of his primary role models, Logano said he only hoped he could measure up to that high standard when he reached Martin’s age –- in the year 2040.

Barney Hall seemed truly nonplussed to be presented with the event’s namesake trophy, the NMPA Myers Brothers Award, but still managed to summon up one of his trademark quips — “Like the little fish said when he swam into a concrete wall, '… damn.'"

Of course, the top 12 drivers were there, participating in what has become one of my favorite vignettes from Champion’s Week. As they are introduced one by one to open the show, the guys come out in their impeccable designer suits and form a single line on the stage. Basically, it’s just a photo opportunity. Literally, all they have to do is stand there and behave themselves.

They never pull it off. Never. The world’s greatest drivers, who literally live in each other’s faces week in and week out, never seem to know what to do up there in their fancy outfits. They decide they need to stand up there and have a chat. They fidget; they put their hands in their pockets. They whisper jokes that must be pretty funny because there seems to be an awful lot of hilarity going on.

This year was the best. Realizing it was a long line, and they were going to run out of room on the stage before Johnson got out there, Brian Vickers, who was introduced first, tugged on the arm of Carl Edwards to get him to move down.

This started a chain reaction-type deal as the drivers pulled and poked and nudged one another in an attempt to properly rearrange themselves. Think about kids all costumed up as vegetables or farm animals in a second-grade play, trying their hardest to occupy their correct spots on stage, and you get the idea.

Plus, I’m pretty sure Martin was wearing sneakers.

Now, I realize this seems like a small point to make such a big deal out of. But really, it kind of sums up the whole feel of the 2009 Champion’s Week.

The most visible faces of a wildly popular sport are in Las Vegas for a week. At the NASCAR Sprint Cup Awards Ceremony, they will be honored for their achievements this year. As an added bonus, they will also get paid for those achievements. They got to drive their race cars down the Strip. They got to mess around on stage with their buddies. They’re having fun.

And because of them, so are we.