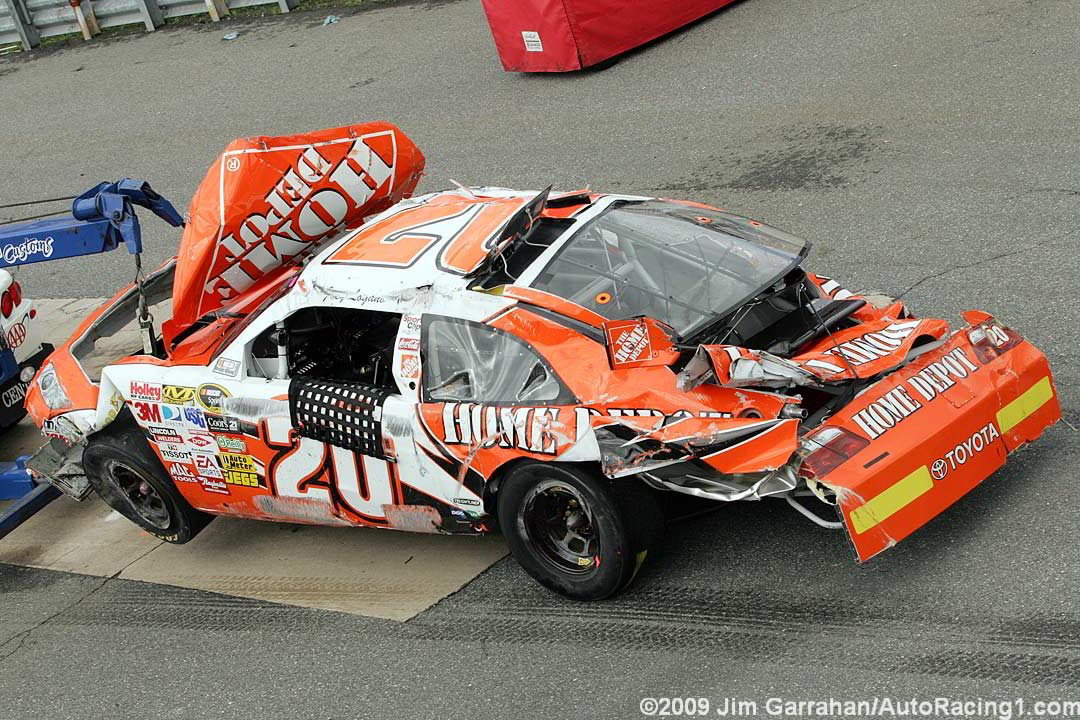 During the NASCAR weekend at the Dover International Raceway we saw exactly why Las Vegas bookies are saying Jimmie Johnson is going to win that fourth consecutive Sprint Cup Championship. We sang another rousing chorus of "Mark Martin is the man" and we witnessed exactly why NASCAR's Car Of Tomorrow is so important to the sport. With all that in mind let's begin with:

THUMBS-UP for driver Jimmie Johnson, crew chief Chad Knaus and the entire Lowes/Hendrick Motorsports Chevrolet team. Their performance during the AAA 400 was virtually flawless and was clearly the work worthy of the name "champions."

THUMBS-UP for Johnson and his policy of remaining so focused on the Chase that he refuses to watch any NASCAR news on television or read any printed reports. He simply doesn't want the distraction these news report could possibly provide. In case you're wondering the answer is yes: I'm perfectly fine with the thought that he will never read a word of this column.

THUMBS-UP to this team's sponsors, Lowes Home Improvement Stores, for using their NASCAR Sprint Cup and American LeMans Racing Series team's performances last weekend as the foundation for donations to the American Red Cross Disaster Relief Fund. The particular focus of the campaign was aimed at aide for the flood victims in Georgia.

Lowes donated money based on their team's performances with a major criteria being the amount of miles they drove. Johnson ran the full 400 miles in Sunday's Dover race which created a $4,800 donation to the Red Cross. A similar formula was used with Lowes drivers Adrian Fernandez and Luis Diaz who combined to drive 353 in last weekend's American LeMans Series at Road Atlanta. The total donation from both races exceeded $29,000.

THUMBS-UP for Mark Martin for more reasons than I have room here to list. The pride of the 50 plus set scored an impressive run in the Dover race, including a second place finish, and will move on to round three of the Chase as the number one seed with a slim ten point lead over Johnson. A Martin-Johnson showdown at the conclusion of the Chase is exactly what NASCAR needs. We're talking about team mate versus team mate, old school versus young lion. The prospects for story lines would be without limit.

THUMBS-UP for the multiple safety features that inspired NASCAR to create their Car Of Tomorrow to begin with. Those very same features allowed Joey Logano to climb out of his car and walk away uninjured after his Home Depot-Joe Gibbs Racing Toyota barrel rolled seven times across the Dover raceway.

THUMBS-UP for Logano and his demeanor during the post wreck live television interview. Despite that horrific accident, he remained calm during the interview and even managed to flash that now famous smile of his.

Now, members of the Junior Nation, cinch up your seat belts because the first WHAT'S-UP of the week belongs to Dale Earnhardt Jr. It seems that MRN, the Motor Racing Network, taped Junior from his in car radio asking for the National Football League scores. Apparently he was interested in how he was doing with the NFL fantasy league he belongs to.

At the time of this radio request Earnhardt was riding around the track somewhere between the 20th and 25th position. I suppose when you're that far in the field, while making no impact whatsoever on the race, you have time check the NFL stats.

But there are two positive aspects to this story. First, it's one more reason why we frequently find Dale Jr so entertaining. Secondly, it's at least one thing that the members of the Junior Nation can't possibly blame on former crew chief Tony Eury Jr.

Now let's move on to the NASCAR Nationwide Series race at Dover.

THUMBS-UP to Clint Bowyer for winning the Dover 200 last Saturday. It was a nice belated birthday present for his team owner Richard Childress who turned 64 earlier in the week. It's also a major shot in the arm for Childress Racing an organization that is not exactly enjoying the 2009 season.

WHAT'S-UP with Brad Keselowski's horrible day during this race? First he attempted to make a pit stop, totally missed the pit road entrance and had to drive around he track and try it again. Then, in an effort to get it right, he got caught speeding down pit road and wound up restarting the race in 18th one lap down. Then, later in the race, he managed to hit the rear of Denny Hamlin's car which caused Hamlin to crash hard into the wall and lose a potential top five finish.

At the end of this race there was a brief scuffle between the two drivers on pit road. Whether or not that's a THUMBS-UP or a WHAT'S-UP depends upon your personal point of view of this type of activity. It's safe to assume that NASCAR officials were yelling WHAT'S-UP. It's also relatively safe to assume that the ESPN2 broadcast producer was yelling THUMBS-UP.

Quite frankly, yours truly was yelling THUMBS-UP. Sometimes these race broadcasts have a tendency to become a little overloaded with vanilla flavoring. Sometimes covering vanilla ice cream with hot fudge and sprinkling some "nuts" into the mix is a good thing.

THUMBS-UP to Johnny Sauter for his first NASCAR Camping World Truck Series win that came last Saturday in Las Vegas. The win moves Sauter up to fifth in the championship standings and is going to be a huge factor in his team winning the Raybestos Rookie Of The Year title.

Another THUMBS-UP goes out to Thor Sport Racing. Their drivers, Sauter and Matt Crafton gave the team a one-two finish at Las Vegas.

The final THUMBS-UP of the week goes to crew chief Chad Knaus for suggesting that NASCAR should look into mid week racing. That comment was made during his weekly appearance on "This Week In NASCAR" aired by the Speed Channel last Monday. A lot of long time fans, including yours truly, who are considered to be old school, late fifties and up, can testify that during the early years of NASCAR there actually was mid week racing.

In his commentary Knaus suggested that a race on a Wednesday or Thursday night could possibly counteract a no win weekend television ratings war with NFL and college football. There were some numbers from the Nielsen Ratings Service, released on Tuesday that reinforces Knaus' point. The ratings from Sunday's race at Dover were 6.9 percent down from the same race one year ago. However, those low numbers were reported to be 8 percent higher over the opening Chase race from New Hampshire held the week before.

Those ratings numbers now leads to the final WHAT'S-UP of the week which is being sent to NASCAR Chairman Brian France. The NASCAR Czar, also on Monday, was quoted as saying that he wasn't particularly concerned about the ratings at this point in time and pointed out that the competition level, plus the abundant story lines, from this year's Chase will help raise the television numbers.

You know who is worried about those television ratings? That would be the executive in charge of programming for the ESPN2 network. That's the guy who, very likely, spends a lot of time sitting in his office mixing top of the line scotch whiskey and Bromo Seltzer into the same glass while trying to figure out how to explain the NASCAR numbers to the upper echelon of the network's chain of command.