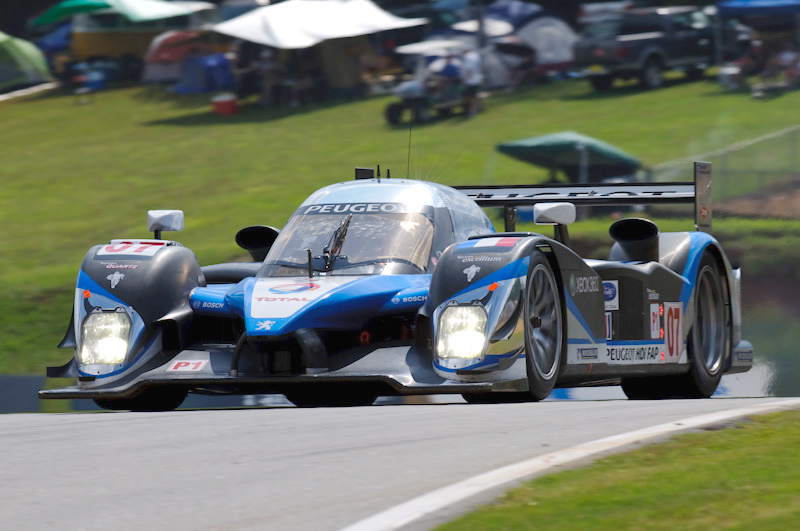 Peugeot broke Audi’s stranglehold on the 24 Hours of Le Mans earlier this year. It could be on the way to doing the same at Road Atlanta. Nic Minassian led a front-row sweep for Peugeot Sport in qualifying Friday for the 12th annual Petit Le Mans powered by MAZDA6, the first step toward what the French manufacturer hopes is its first victory in the American Le Mans Series.

Peugeot is racing fellow diesel-power Audi for the third time this season, following clashes at Sebring and Le Mans.

“Coming here and racing in America is the best training you can get," said Minassian, who won the overall Petit Le Mans pole in a Creation-Judd prototype for the 2007 race. “You get the best fight with the teams…very professional. And the tracks here are very challenging. It’s satisfying when you are successful. I think the team has improved a lot because of the experience they’ve had over the years. The mechanics, engineers, everything – they were focused but young so the experience has really helped us develop. I think the thinking is a bit more straight forward."

That will help with Peugeot seeking to end Audi’s nine-year winning streak at Petit Le Mans. The German manufacturer, also winner at Le Mans in eight of the last 10 years, grabbed third on the grid with Dindo Capello’s lap of 1:08.200 (134.076 mph). He will drive one of Audi Sport Team Joest’s two factory R15 TDIs with Allan McNish.

The pairing won Petit Le Mans the last three seasons including a nail-biting race against Peugeot last year. The odds are even this year with a two-on-two battle; Peugeot had only one 908 in the 2008 race.

“It is always easier with two cars," Minassian said. “You can try different things with each car. If you only have one car, it’s always in the back of your mind that this is the only chance you have. But with two cars, you can take a little bit more risk if you need to."

Simon Pagenaud was the fastest non-diesel qualifier with a lap of 1:08.348 (133.786 mph). He placed fifth in qualifying behind the wheel of de Ferran Motorsports’ XM Acura ARX-02a that he will share with Gil de Ferran and Scott Dixon. The other Acura LMP1 entry from championship-leading PatrÂ¢n Highcroft Racing did not qualify as the team continued to build up a new chassis after Scott Sharp’s horrific crash in Thursday afternoon’s practice.

Franchitti will drive with Butch Leitzinger – the two were class winners at Lime Rock – and Ben Devlin. The car missed significant practice time earlier this week after installing a new engine Thursday morning.

“The BP Dyson Mazda car was unbelievable," Franchitti said. “After the fifth lap of testing we ran a 1:11 even though we didn’t do any (pre-event) testing here. The night session went really well for us. I was pretty confident we had a good car that could compete for the pole. But today, it’s like Road America and Mosport; when you put together a good lap, it can really be a lot of fun."

Graf, who was quickest in each of Thursday’s three sessions, put in a fastest lap of 1:11.405 (128.058 mph). He will drive the Porsche prototype – which coincidentally Cytosport purchased from Dyson Racing – with team owner Greg Pickett and Porsche factory driver Sascha Maassen.

Lowe’s Fernandez Racing’s Adrian Fernandez qualified third in class at 1:11.758 (127.428 mph). He and teammate Luis Diaz clinched the class driver’s title in the previous Series round at Mosport and have won seven times in eight races this year.

“This is the first year of our program (with Lola and Mazda) so to get it to the end will just be fantastic," Franchitti said. “We know the Porsche and the Acura will just run and run, so we need to focus on running our race and focus on finishing."

David Murry shocked the GT2 field with his first pole position, the first pole for the Ford GT-R and first for Robertson Racing in the American Le Mans Series. The Atlanta driver turned a best lap of 1:20.819 (113.142 mph) to slip by LG Motorsports’ Tom Sutherland in one of the closest qualifying sessions in the Series – and certainly at Road Atlanta – regardless of class.

Sutherland is driving the LG Corvette C6, in its first race back following a major fire in April at the Long Beach round, with Tomy Drissi and Matt Bell.

“I have to say, I’ve been in the American Le Mans Series since Day 1 and this has to be the most competitive field I’ve ever been in," said Murry, whose lengthy career includes stints as a factory driver for Porsche, Lotus, Toyota and Nissan. “The factories are really stepping up their games, and last night there were something like six cars within a tenth of a second. It’s just been great.

“I’ve driven for the Porsche factory a bunch and I know how all that works," he added, “but that’s the great thing about this series. It’s how the team performs on the track. They might have the technologies and the funding but it shows that it’s so close, that if you work hard and you do your work you can compete with these teams on the same level. I’ve been on the front before, but this is really special."

The Ford GT-R has shown flashes of potential this year. Murry has kept it consistently among the top half of the GT2 field but admitted there wasn’t any hint of a pole run this week. The improvement of the car over the course of the year was phenomenal. Murry’s qualifying time last year was nearly two full seconds off Jaime Melo’s class pole-winning lap.

“The whole team is emotional. We had the car delivered to us 10 days before this race," Murry said. “We worked so hard to setup the core. We’re a little privateer team. If you look at it, we’ve had a year-and-a-half to get where we are today. We don’t have the factory support or the funding so we’ve had to work extremely hard to get here.

“This morning with the red flag I had to rush to get the tires up to temperature so we could figure out the aero balance," he added. “So we had to setup the car for qualifying without really testing the setting. We went out for qualifying and we really didn’t know what the balance would be."

It turned out to be just fine.

The 12th annual Petit Le Mans powered by MAZDA6 on Saturday, September 26 is the American Le Mans Series’ cornerstone event at Road Atlanta in Braselton Ga. The green flag for the 1,000-mile/10-hour endurance classic is scheduled for 11:15 a.m. ET with SPEED airing live television coverage starting at 11 a.m. ET … rain or shine! American Le Mans Radio presented by Porsche and Living Timing & Scoring will be available on Racehub at americanlemans.com. Live coverage also can be heard on Sirius 126 and XM 242. You can follow the Series on Twitter (almsnotes) and on our Facebook page.

The race will also mark the ninth round of the 2009 MICHELINÂ® GREEN XÂ® Challenge. Tickets are available at americanlemans.com and roadatlanta.com.