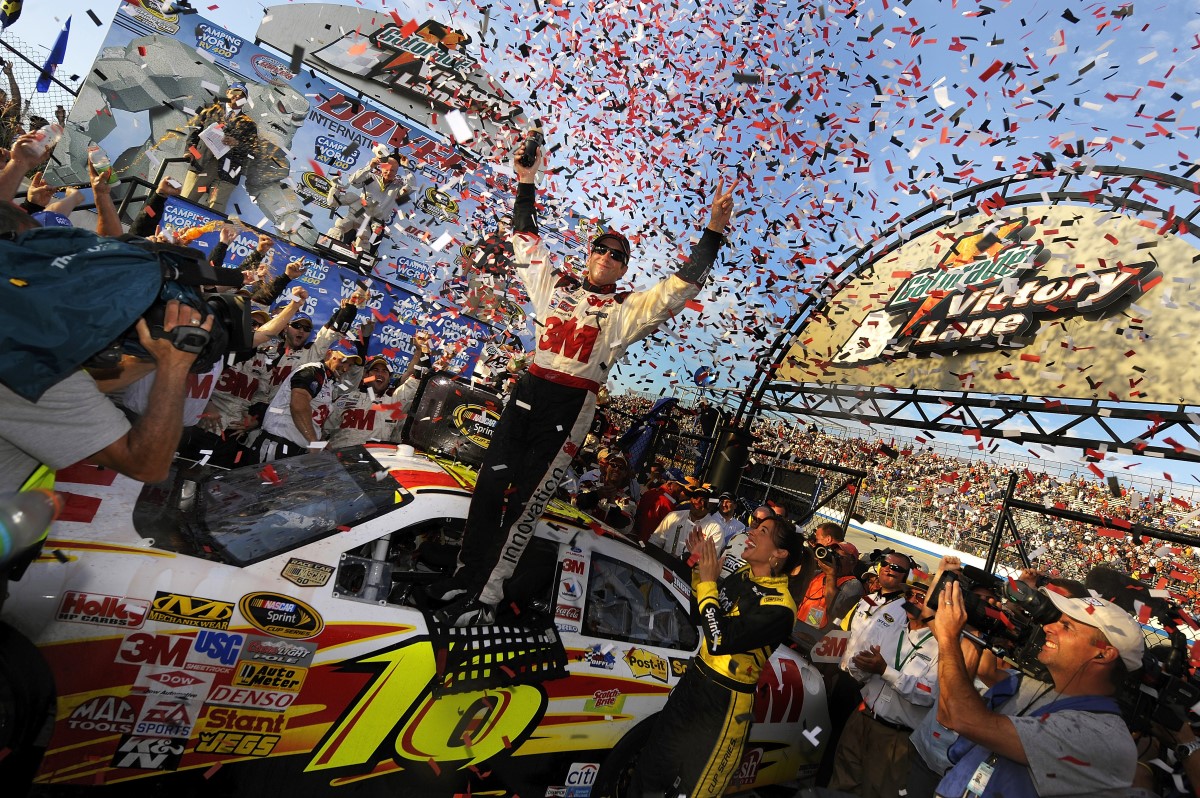 Race number two of the NASCAR Sprint Cup Chase For The Championship moves on to the Dover International Raceway, aka "The Monster Mile", for Sunday's running of the AAA 400. Some of the teams in the 43 car field may actually need AAA insurance by the time this day is over. The "Monster Mile", and its one mile concrete oval, can reach out and grab a race car by the back bumper at any moment. It's also famous for the occasional "big one", the type of multi car wreck usually associated with restrictor plate racing. Even the trophy for the race winner has an intimidating aura about it.

Going into the Dover race series points leader Mark Martin, who will be making his 750th career start this Sunday, remains the top seed for the Chase but is only 35 points ahead of Jimmie Johnson. This will likely become highly significant because both drivers have outstanding numbers at this race track.

Martin, gunning for that first NASCAR championship that has eluded him all of these years, has four wins at Dover and leads the track stats with the most top five finishes, 21, as well as the most top tens, 29.

Johnson, looking for that historic fourth consecutive NASCAR championship, is also a previous Dover winner. Johnson and company are naturals when it comes to figuring out Chase scenarios. They have a streak of 27 consecutive top five finishes in Chase events. Doing some math that computes to 67 percent of all Chase finishes being in the top five.

Also not to be overlooked is the presence of Denny Hamlin who ranks third in the Chase standings also 35 points behind Martin. The lone hope of Joe Gibbs Racing in the championship picture, this team is on a hot streak of top five finishes and truly seems to be in a championship mode.

The same can be said about Juan Pablo Montoya: fifth in the standings and 55 points from the top this week. The fact is team is even in the Chase at all is still amazing. Montoya showed a lot of strength last Sunday in the New Hampshire race and led the most laps prior to his third place finish. But he also showed a lot of frustration after the race and made a rather eyebrow raising remark when he claimed Mark Martin "screwed him" during the final restart of the race.

It was apparent the conclusion of the New Hampshire race was still on Montoya's mind last Tuesday when he participated in a scheduled NASCAR teleconference. When asked if he had spoken with Martin this week Montoya replied "I really haven't talked to Mark at all. I think he ran an awesome race and did what he had to do to win the race. I wasn't the happiest guy, I did some interviews this morning and I said that. It's fun when you do it to someone else, but it's not fun when they do it to you. But that's part of it. For the Chase we have to bring our A game and we did. There's no holding back, we have to go every week. Some weeks are going to be better than others, but it's still time to go."

These drivers may notice a trail of wet footprints on the ground behind them which means their Chase hopes could be treading a little water. This is the group that will bear watching at Dover on Sunday because they are the ones who will need to step up their A game the most.

The AAA 400 is exactly 400 laps, and 400 miles, around the Dover International Raceway's one mile oval.

The race has 44 entries vying for a starting berth in the 43 car field. Nine of those entries are on the "go or go home" list meaning they are not guaranteed a starting berth because they are outside of NASCAR's top 35 in owner's points. That means they must earn their starting berths based on their qualifying speed. If by chance Friday's scheduled qualifying gets rained out, then driver Scott Wimmer, representing Morgan McClure racing, will be the one who has to pack up and go home early.

It's not expected that Mother Nature will rain on the qualifying but there the potential for her creating havoc with the race. The National Weather Service forecast, for the Dover-Delaware area, calls for partly cloudy conditions, with day time highs in the upper 60's, on Friday and Saturday. However the forecast also calls for a 40 percent chance of rain on race day. That could mean a rain shortened event on Sunday or watching a conclusion on Monday morning.

The defending race champion from last year is Greg Biffle who started from the fifth starting position. Jimmie Johnson won the first 2009 Dover race, held this past June, from the 8th starting spot.

NASCAR legends Richard Petty and Bobby Allison are tied for the most Dover wins at seven each. Among the active drivers Jeff Gordon, Mark Martin and Bill Elliot has four wins each.

Chevrolet leads the manufacturers standings with 29 wins at Dover largely based on the efforts of Hendrick Motorsports who has a series leading 11 wins there.

While 50 year old icon Mark Martin may be busy taking the younger drivers to racing school, he's actually not the oldest driver to win at Dover. That honor actually belongs to Harry Gant who won there in 1992 at the age of 52.

Track position is always important at Dover and the sooner you get to the front at the beginning of the race the better. 47 of the Sprint Cup races at Dover have been won from the top five starting positions. Jeremy Mayfield holds the Dover track qualifying record, 161.522 MPH, which was set back in the summer of 2004.

NASCAR legend David "The Silver Fox" Pearson owns the track record for the most poles at six. Among the active drivers Ryan Newman, Mark Martin and Jeff Gordon has earned the front row starting berth four times each.

The competition level at Dover is capable of running the gamut from very active to a one driver act of dominance. The record for the most lead changes, 29, was set twice with the most recent being in the spring of 1986. In direct comparison the fewest lead changes, three, was set in the fall of 1971.

Richard Petty holds the track record for most laps led at Dover. The seven time NASCAR champion led 491 laps, of a then 500 mile race. back in 1974. Among active drivers Jeff Gordon led 381 laps, back in 2001, that ironically didn't earn him a trip to victory lane.

Three of the last four Dover races have been won by a margin of victory of less than one second.

The "Monster Mile" can often create wreck marred events. The record for the most caution flags and caution laps, 16 flags/103 laps, was set back in the fall of 1993. On the other extreme a 1971 Dover race had a zero total of yellow flags and laps.

The Dover International Raceway opened in 1969. NASCAR's first Sprint Cup Series race was held in July of that year and was won by Richard Petty. Since that time there has been 79 Cup races there that has sent 32 different drivers to victory lane.

In 1995 the track was reconfigured to its present all concrete surface.

The speedway has 24 degrees of banking in the turns and nine degrees banking in the straightaways. Both the front and back stretch measure 1,076 feet long.

The Dover pit road has 43 stalls with each one measuring 15 feet wide by 32 feet long. The pit road speed is 35 MPH.

The speedway presently has seating for 135,000 fans.

The Las Vegas based World Sports Exchange-WSE has some rather interesting wager lines for Sunday's race. To no real surprise Jimmie Johnson tops the WSE ranking this week as a 4 to 1 favorite to win the AAA 400.

Now here's the first of a few really interesting wagers. Mark Martin and Tony Stewart are ranked at 7 to 1 odds this week. That's so tempting it's actually has me staring at my cell phone sitting on the top of the desk just a few inches away.

In other WSE rankings Greg Biffle is ranked at 9 to 1, Carl Edwards comes in at 10 to 1 as does Jeff Gordon who is the subject of yet another interesting wager that bears consideration. So does 12 to 1 odds on Denny Hamlin and Kyle Busch. Again, I'm staring at the cell phone over that one.

Kurt Busch and Juan Pablo Montoya are ranked at 15 to 1 followed by Kasey Kahne and Ryan Newman at 18 to 1. Matt Kenseth comes in a 22 to 1 this week.

The WSE is absolutely not showing any love for the teams from Richard Childress Racing this week. Kevin Harvick is ranked at 25 to 1, Clint Bowyer is 30 to 1 and Jeff Burton is a whopping 60 to 1 this week. The fourth Childress driver, Casey Mears doesn't even have an official ranking.

For you members of the Junior Nation, Dale Earnhardt Jr comes in at 30 to 1 this week. The rankings close with drivers Brian Vickers and Martin Truex Jr at 35 to 1.

It's time for the weekly disclaimer. Once again NASCAR wants you to know that these posted numbers are for entertainment purposes only and they neither encourage nor condone the placing of bets on their races.

But there is some good news for you big time gamblers. Last June the Delaware State Legislature passed a bill that now allows the placing of wagers on professional sporting events. They now join the states of Nevada, Oregon and Montana as the only ones in the country where this activity is completely legal.

That should make you feel much better after blow the mortgage payment betting on a NASCAR race.