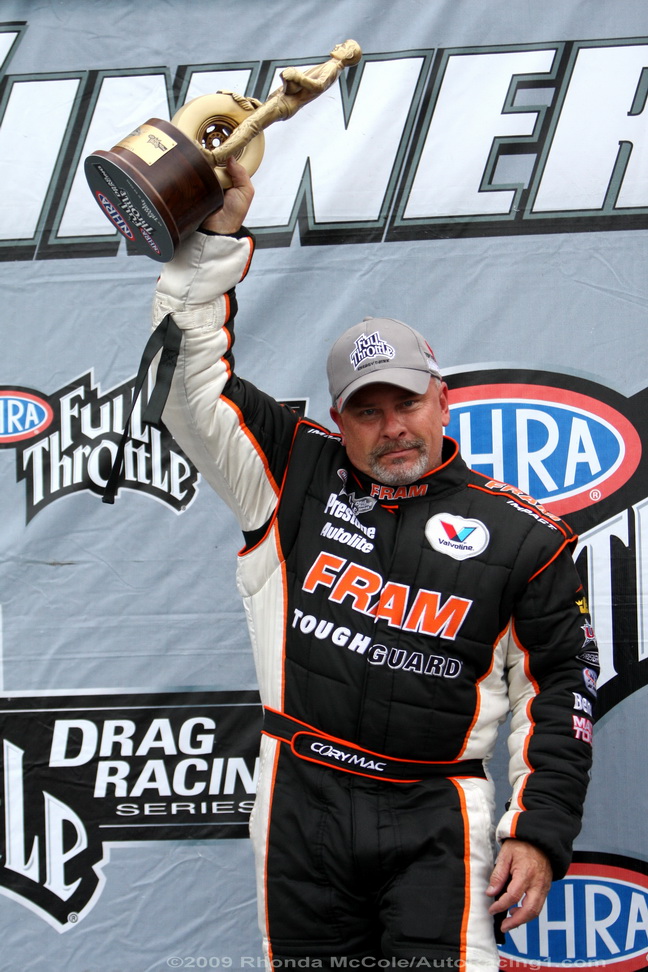 NHRA Full Throttle Series Top Fuel driver Cory McClenathan and Funny Car pilot Robert Hight notched their first final round win of the season on Sunday as the Countdown to 1 got underway at the Carolinas Nationals at zMax Dragway.

Mike Edwards took the top spot on Pro Stock, while Hector Arana won the final round in Pro Stock Motorcycle.

The first event in the Countdown to 1 six-race playoff saw a number of position change hands, as three of the four classes closed out the day with new leaders atop the standings.

McClenathan posted an elapsed time of 3.857 and a speed of 312.64 mph in his fourth final round appearance of the season, beating first-time final-round driver Shawn Langdon to move to the top of the Top Fuel point standings.

McClenathan’s win was the 31st of his NHRA career and his first final round victory since the spring race at Las Vegas last season.

“You feel bigger than life sometimes and that's the moments that I think I cherish the most," said McClenathan. “You're going down through there and you want that win light to come on so bad, you're almost willing your car to the other end, and when it did today, I was just overcome with Oh, my God, itÂ¹s been so long."

“Going a year and a half without winning a race, that's a long time. My teammate (six-time world champion Tony Schumacher) wins all the time, so it's easy for him to say, but for me it is that very moment, right then. It's unbelievable."

McClenathan’s victory pushed him from fifth to first in the Top Fuel standings over Antron Brown, who was eliminated after smoking the tires early in round one. Brown fell back into a two-way tie with defending champion Tony Schumacher for second.

Robert Hight also put an end to his own winless slump, taking the final round in Funny Car to beat out rookie Matt Hagan with an ET of 4.097 and a top speed of 307.02 mph for his first victory since Indianapolis last season.

After barely making into the final slot in the Countdown field, Hight’s victory vaulted him from 10th to third in the standings behind Tony Pedregon and Ashley Force Hood.

“It’s unbelievable the timing we’ve got right now because the first part of the year, we stunk this place up; it was terrible," said Hight. “You start to begin to wonder if you can even win.

You look at all these races out here, and it’s not that easy to win. Every round, I had someone in the other lane clear to the finish line. If you’re a little late or something happens to your car, any little thing, you’re going to lose. The last two rounds I had were unbelievably close races with my teammate Ashley Force and then Matt Hagan, who hopefully gets rookie of the year because he’s done a great job and driving these Funny Cars ain’t that easy."

Edwards pulled off a final round run of 6.618 seconds at 209.39 to easily best Greg Stanfield for his fourth victory in his last nine final round appearances.

Edwards also used his final round victory to springboard to the top of the Pro Stock standings for the first time in his career, taking advantage of the new qualifying rules that allowed him to rack up 10 bonus points during qualifying, pushing his points total for the weekend to 128, just two points shy of the maximum of 130.timing we’ve got right now.

“I told Greg [Stanfield] the caution light must have come on my side [of the Tree] first, because he’s hard to leave on," said Edwards. “My car was flawless. It went up and down track every time. It was a great weekend and a great start for this Countdown."

Hector Arana remains perfect in final rounds this season, making it four-for-four with his victory over Karen Stoffer with a 7.004 at 189.31 mph., pushing him to the lead in the Pro Stock Motorcycle standings.