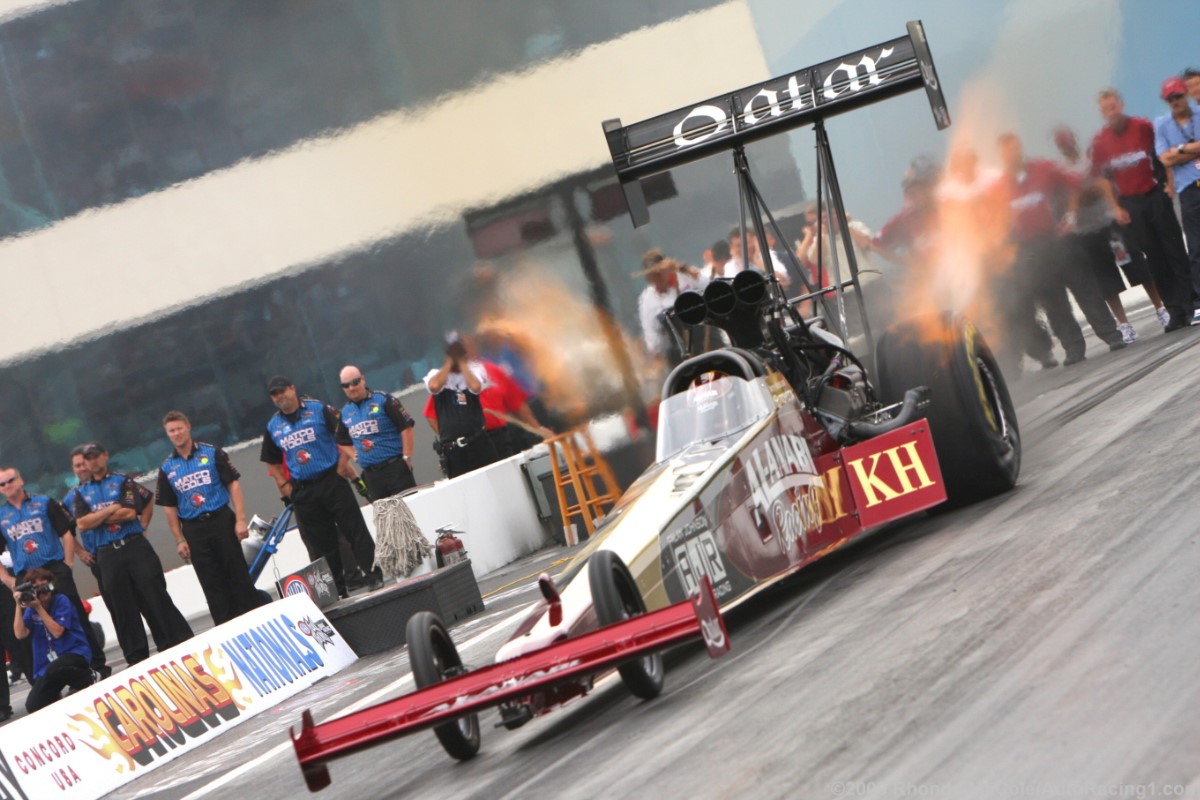 Larry Dixon led the field in Top Fuel qualifying on Saturday while Cruz Pedregon tried his best to salvage his Funny Car season as the NHRA prepares to kick off the Countdown to 1 at the Carolina’s Nationals at zMax Dragway.

Under far more different rack conditions than on Friday, Dixon powered his Al-Anabi Racing dragster to a top elapsed time of 3.844 second to top Antron Brown, who was the top qualifier from Friday’s sessions. Brown retained the number two spot, followed by Tony Schumacher, Brandon Bernstein and Doug Herbert.

Under the new NHRA qualifying rules, Dixon’s fifth number one of the season earned him three bonus points as he tries to stay in the hunt with Brown for the Top Fuel points lead.

“Every session you just try to run the best that the conditions will allow," said Dixon. “Yesterday we ended up fourth quick [first session, fifth in the second] and then Alan [Johnson, team owner] and Jason [McCulloch, crew chief] have been working on different set-ups with the car just to make the engine run a little bit better. It ran better this morning; it was real good. We ended up on the pole by three-thou. That was on the right side of things for sure.

“As far as bonus points, I’m sure somebody got more than we did. We’re trying to run well every session, anyway. We get four test sessions during the year, it’s what we’re allowed, and we try to do all our testing then. But if you look throughout the year, we’re trying to run hard every session. Now the teams that do well are going to get rewarded for it."

Saturday’s number one slot was bittersweet for Pedregon, who was bumped from Countdown to 1 field two weeks ago at Indianapolis and will not be able to defend his Funny Car title.

“It’s great to be No. 1, it’s an honor," said Pedregon. “But now it’s time to go out there and go some rounds tomorrow. We want to win a race to salvage our year, so whoever’s in the other lane is going to have to beat us. We need the win, and we have a car capable of doing it. We just need to do it."

Edwards by far benefited the most from the new bonus points, racking up 10 points for leading qualifying on both Friday and Saturday.

“These extra points can determine the championship," Edwards said. "I'm a big fan of this new deal. We got almost all of the points we could, except two, so my guys really deserve a lot of credit. Those points are huge. The pressure feels like first round every time up there because every other car is trying to do the same thing as you are."

Ronnie Humphrey claimed the number two spot, followed by Kurt Johnson, Allen Johnson and Jason Line. Drivers Rickie Jones and Ron Krishner both failed the qualify – the only Countdown to 1 drivers to not make the show on Sunday.