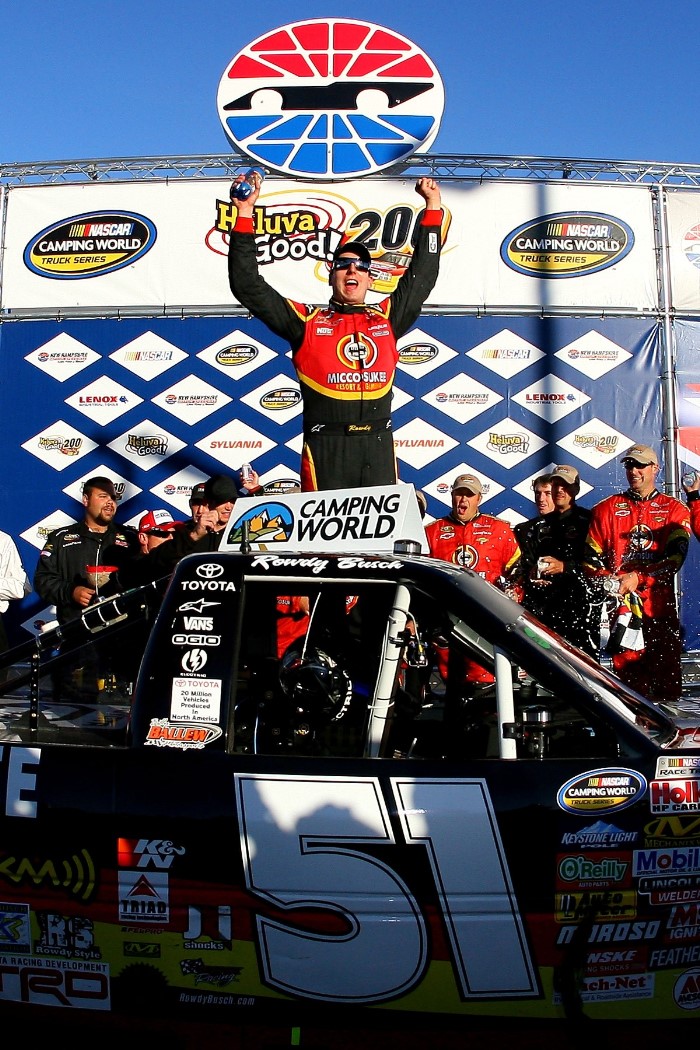 Kyle Busch didn't have the fastest truck on Saturday, and he had barely enough fuel to make it to the finish line.

Neither circumstance prevented him from winning his third straight start in NASCAR's Camping World Truck Series and his fifth race of the season. Busch took the checkered flag in the Heluva Good! 200 at New Hampshire Motor Speedway, as points leader and runner-up Ron Hornaday Jr. and his team owner and third-place finisher, Kevin Harvick, battled for position behind him.

Harvick believed Hornaday's failure to move over in favor of Harvick's faster truck in the closing laps — which Harvick attributed to lack of communication between crew chiefs and spotters — cost Kevin Harvick Inc. the victory.

Busch took on four seconds' worth of fuel during a splash-and-go on Lap 172 of 200 and got back on track ahead of Hornaday, whose stop on Lap 170 had lasted almost twice as long. A debris caution on Lap 189 helped Busch conserve enough gas to get to the end of the race. His fuel cell hit "empty" as he approached victory lane.

"They told me we were going to be about five (laps) short (after the final stop)," said Busch, who finished .560 seconds ahead of Hornaday. "I was like, 'You're kidding me! We just stopped and filled this thing.' It barely made it. It ran out coming into victory lane there."

Harvick expressed his displeasure after the race.

"The communication between the spotter and the crew chief wasn't relayed to the driver very clear," Harvick said. "I felt like one of the two trucks should have won the race. I felt like we were a little bit better truck, but you can't put yourself in position to do something underneath him (Hornaday) that would be detrimental to his championship chase.

"It's just some things internally that we probably need to work on there. Second and third today is still a good day, a good day for (Hornaday) in the championship race, but I feel like we didn't do what we needed to do."

Hornaday, who extended his lead in the series standings to 217 points over Crafton, said he wasn't aware of the problem until after the checkered flag.

"It was a good day — until after the race," he said. "He (Harvick) got up to me three or four times and I backed off. He ran underneath me. I don't know if he was getting loose or whatever underneath me. I had older tires. I didn't have fresher tires. But I'll take second. …

"I'm going to talk to him right now. I don't know what I done wrong."

Note: The victory was Busch's 14th in 65 truck series starts.

How was your race today?
"It was a great race today. I'm real proud of the guys and Richie (Wauters, crew chief) for working so hard on these trucks. We come to these tracks and sort of struggle sometimes. This is I think our third year together now and we seem to hit on something a little bit better not quite as good as the 33 (Ron Hornaday) or the 2 (Kevin Harvick) but there at the end we were out front when it mattered and had just the right amount of fuel in order to make it. So, real close on all of that but the Miccosukee Tundra was great. We kept up with those guys today. We did all that we could. We pressured them, we led a lot of laps – the best we've ever run here. I was going to be alright with a second or a third. I think that's the truck that we had but the way it played out you've just got let these things play out sometimes and today we did."

Were you worried about fuel at the end of the race?
"Yeah, they told me we were going to be about five short and I was like, 'You've got to be kidding me. We just stopped and filled this thing.' So, it barely made it. It ran out coming into victory lane there. Man, what an awesome Tundra this was today. It was able to keep up with the Chevrolets at least. I'm real proud of Richie (Wauters, crew chief) and all of these guys that work so hard on this Miccosukee Tundra to get it here. Thank Graceway Pharmaceuticals, thank the fans, thank NOS Energy Drink and everybody that makes this program possible for us. It's cool, you know, you come to Loudon and you've got five race divisions or whatever it is in one weekend and they've still got another one left to go here tonight."

Are you excited to have won here at Loudon in all three NASCAR divisions?
"That's cool, man. That's something special. We look to do that everywhere we go but we've been fortunate enough to have good race trucks like we've had this year. I don't know what's wrong with the right front tire but it was vibrating and shaking the last 60 laps. We barely made it there. I was waiting to get run over there on that last restart. I'm glad I was out front being the one that was being chased instead of being the guy that had to chase the others. It was fun."

Were you able to run a lot of laps on the tires today?
"We sure did but with 60 to go my right front started vibrating and shaking. I don't know if it was the brakes or the tires or what but it never went away even under cautions so I take it it had to be the tires. Unfortunately there we had to battle through that but we did. A lot of good things came out of today and I'm real proud of these guys. They had good pit stops today. Our fuel mileage, we might need another mathematician if anybody out there wants to come out there and work for us we'll certainly take a look. We were too close to call today."

Is it more interesting when it's a two on one battle?
"Yeah, it was a battle there. It was a battle from lap one coming out of turn 2 with (Mike) Skinner. Really, it's a hard fought race track. It's real hard to pass for these trucks for some reason – they get aero sensitive behind other trucks. For me, that's how (Ron) Hornaday got by me. I got in traffic a little bit and slowed down. He kept going. He had a better turning car or something that just allowed him to get by me. It was cool the way that it raced and the way that it played out and we're glad that we were able to win. We came down and had a quick pit stop and took four seconds of gas which we probably needed about four and a half to be a little bit safer but we made it."

How thankful were you for the final caution?
"I think we would've been close. How many laps was the caution? Three? It was a three-lap caution. I was backing off and trying to save there during that green-flag run and I think I had about a second and a half gap or maybe a second gap back to those guys behind me. It would've been hard for them to get by me anyways. We saw that after the restart so I was trying to save as much as I could a little bit in order to make it. Fortunately, we didn't have to find out. We did have that caution and I kept saving underneath the caution. Just shutting it off and trying to roll as much as I could. We made it. We made it and made enough to run a cool down lap, do a mini burnout because I didn't know if I could do a burnout or not with the motor rule the way it is and then on the way driving into victory lane it ran out. It was pretty close."

Were you surprised that Ron Hornaday and Kevin Harvick couldn't gain on you more?
"In that last run, yeah. I thought the 2 (Kevin Harvick) might have been better than the 33 (Ron Hornaday) and he might have got by and gone for the win. But (Kevin) Harvick is protecting points so he finished behind the 33 (Ron Hornaday) I believe and protected those five points from (Ron) Hornaday dropping back or somebody else coming forward. That's what he's here to do. He's here to just run on the tailgate of the 33 and it left the door open for me to win the race. I don't care. We were upfront enough that we were able to do that and we were in that position that we could take advantage of that. I'm glad I didn't have to race (Kevin) Harvick because I felt like he had the better tires and the better truck. He did what he needed to do to try to win himself and his team a championship."