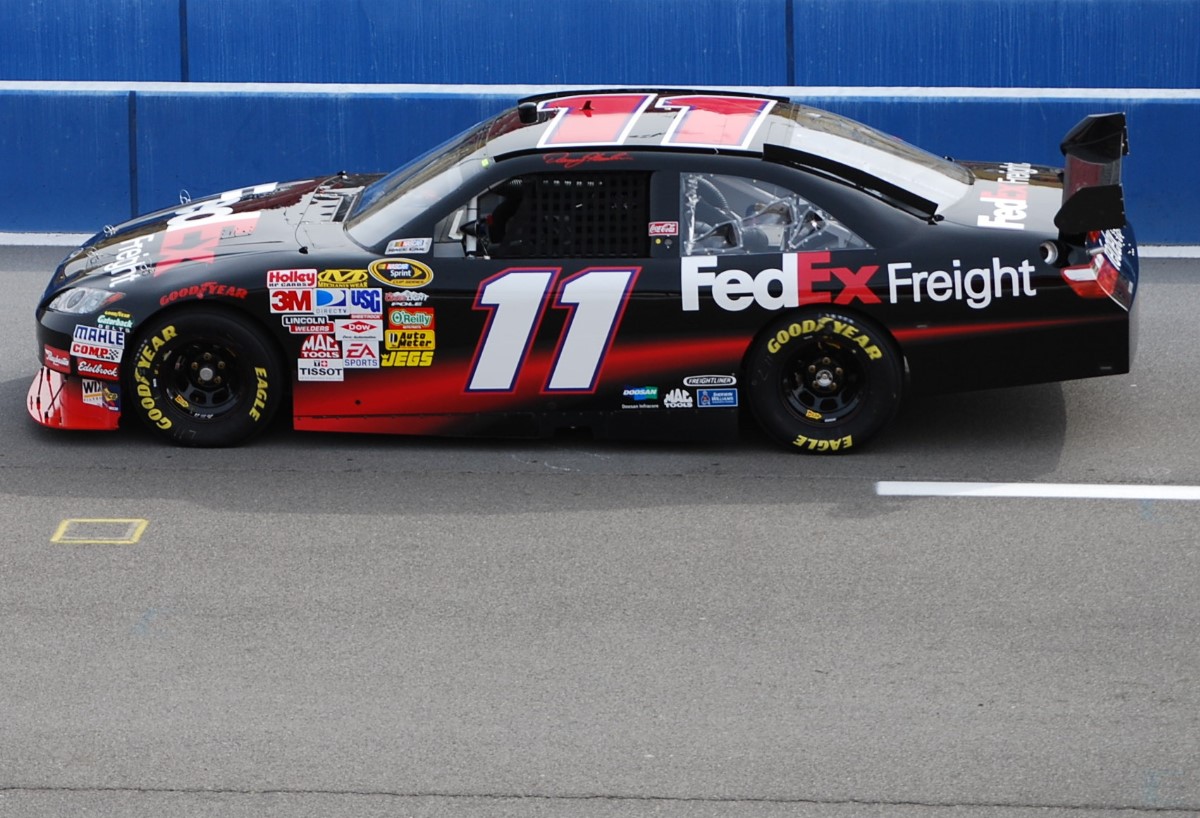 The NASCAR Sprint Cup Series' Race #26, Saturday night at the Richmond International Raceway, lived up to all of the hype and anticipation that preceded the event. The final resolution of the 2009 Sprint Cup Chase For The Championship roster featured drama between three drivers racing for the 12th and final spot. We also got treated to seeing home town hero Denny Hamlin winning at a track that's practically in his back yard. Carl Edwards proved to us that the only thing he can't do is a post race back flip and, from the mid west, we saw a wreck marred NASCAR truck race that treated us to another exciting green white checker finish. With all of that in mind let's begin with:

THUMBS-UP to the Chevy Rock N Roll 400 for delivering the dramatic excitement that we were all expecting. Beyond the important element of who was going to make the Chase, this was actually a very good race with some good door to door racing all through the field. The event was very much enjoyed by the 108,000 plus in attendance.

THUMBS-UP to Denny Hamlin for finally getting that much sought after Sprint Cup win at Richmond. Hamlin led nearly three fourths of the race, 299 laps, en route to his second win of he season. This was very important to the young Joe Gibbs Racing driver because his Chesterfield home is just a short freeway ride away from his home race track.

A double THUMBS-UP goes out to Brian Vickers, and Red Bull Racing, for 24 days of high quality performances that earned a spot in the Chase. The process began August 16th when the team scored their first ever Cup win at Michigan. But the effort that led to the Chase berth occurred at the Atlanta race when the Red Bull team managed to change an axle on pit road and keep their driver on the lead lap. The overall team effort at Atlanta elevated Vickers to 13th in the standings just 20 points away from the top 12 Chase cut off.

Prior to Saturday night's Richmond race a post it note was placed on Vicker's dashboard that read "whatever it takes." What it took to get this team into the Chase was an outstanding job by the driver and excellent pit road service by the crew. They consistently helped their driver gain track position on pit road. One of those stops was an impressive 12.9 seconds.

From that point it was up to Vickers to stay ahead of Kyle Busch who was also on the outside looking in of the Chase line up. The two drivers traded the 12th spot in the standing back and forth multiple times before Vickers was finally able to get a few positions ahead to take the final Chase berth by eight points.

Making this effort even more impressive was the fact that the team has only been in existence for approximately two and a half years. Here's hoping Vickers threw a big party for these guys including dinner at the best steak house in North Carolina.

If the Vickers team gets a double THUMBS-UP for their effort then, sadly, Matt Kenseth gets a double WHAT'S-UP for what had to be one of the most frustrating night this Roush Fenway Racing team has ever experienced. Kenseth and company started the Richmond race on the Chase bubble 20 points ahead of Vickers and 37 points ahead of Busch.

Nothing went right for this team during the entire race. The car's handling was an all night puzzle that led Kenseth to refer to it as "unfix able" over the team's radio. But the crushing blow came on a pit stop when Kenseth overshot his pit stall. We're not talking about the typical case of the front tires being a few inches over the white line. Kenseth's Ford slid a full three pit stalls down pit road before it came to a rest and the driver had the back the car up to his assigned space. Even staying on the lead lap was a chore for a team who had to settle for a 25th as well as the realization that they will not be involved in the Chase for the first time since its inception.

You also have to send a WHAT’S-UP to the team that won four races this year but couldn't parlay it into a berth in the Chase. Kyle Busch provided us with a lot of entertainment all during the Richmond race by swapping the 12th position with Vickers all evening long. But in the long run Busch, and his Joe Gibbs Racing Toyota team, missed the mark by eight points.

After the race Busch said it wasn't the eight points from the Richmond race but was a conglomerate of missed points from some up and down performances during the summer months. But Busch deserves a THUMBS-UP for actually showing some class during his post race interview. An entire nation of NASCAR fans were practically salivating over the potential of this interview. We were expecting to see the "rowdy one" turn purple while emitting steam from every orifice in his body.

Instead Busch made it a point to thank his team, his sponsors and even congratulated Hamlin and Vickers. It was actually a very classy performance by this driver. Well, almost anyway. At the end of the interview Busch made a rather bizarre comment and said "the good Lord put us in this predicament and maybe one day I'll figure out why."

Wait a minute. Did he actually blame not making the Chase on God? That deserves another WHAT’S-UP and possibly even a Heaven sent bolt of lightning.

That now leads to a THUMBS-UP for one of the better lines heard during the Richmond race from the ABC/ESPN broadcast team. 162 laps into the race Rusty Wallace commented on the sight of Vickers and Busch trading the 12th Chase position back and forth and said "Me and Brad (Daugherty) both said that Vickers and Busch would not make the Chase this year. Right now, we're looking pretty stupid."

WHAT’S-UP with Tony Stewart's night at Richmond? Early in the race he created a three wide racing situation in turn one and collected Reed Sorenson. After getting repairs he began the process of working his way to the front only to go backwards two more times due to pit road problems. One of those situations involved a dropped lug nut that cost him eight positions. The other problem involved Stewart accidentally running over a crew member from David Reutimann's team. The crew member was likely sore on Sunday morning but otherwise uninjured. Is it possible that Stewart was getting rid of his hard luck mulligans before the Chase officially starts?

WHAT’S-UP with David Ragan collecting the rear of Brad Keselowski's car on pit road? The hit was so solid Keselowski spun backwards into his pit stall. Fortunately all four of his tires were within the white lines of the pit stall so Keselowski's team legally changed tires and added fuel even though the car was facing backwards on pit road.

THUMBS-UP to Carl Edwards for proving that not even a broken foot can stop a good driver. Edwards won Friday night's NASCAR Nationwide Series race at Richmond after starting from the back of the field. It was his fourth win of the season and 24th career series win. Due to his broken right foot there was no traditional Edwards back flip after the race. Edwards said his doctors made it crystal clear not to try it.

But WHAT’S-UP with an embarrassing moment in the Sprint Cup garage when Edwards accidentally hit the rear of Jimmie Johnson's car following a Friday practice session? Edwards said he used his broken right foot on the brake pedal to stop the car. Apparently it didn't work.

But WHAT’S-UP with the circumstances that placed him in victory lane? Even Skinner came over the radio during the final lap and said "I don't believe it." The late in the race carnage came during the final eight laps of the race when Matt Crafton got into the back of Todd Bodine's truck. Bodine slid across through the grassy area and then went back across the track where was hit by Colin Braun and Rick Crawford. All three trucks sustained major damage.

After the race Bodine admitted that he blocked Crafton but was amazed that he didn't give him any room. "How stupid do you have to be to turn somebody in turn one?" Bodine asked adding "he's pulled this crap all during his career. You can't fix stupid."

Crafton's next WHAT’S-UP came following a restart with only four laps left in the race. This time he was lined up behind race leader Ron Hornaday Jr. Once again Crafton found some one's rear quarter panel. This time it was Hornaday's truck and result was a three vehicle wreck that left Hornaday's truck completely demolished. The incident also deprived Hornaday of an apparent sure fire race win.

Hornaday, after the race, deserves a THUMBS-UP for taking a rather subdued as well as classy approach to the incident. But the implication was there that you wasn't ready to forget it anytime soon. NASCAR decided they had seen enough and presented Crafton with a black flag for his double WHAT’S-UPS within eight laps of the race.