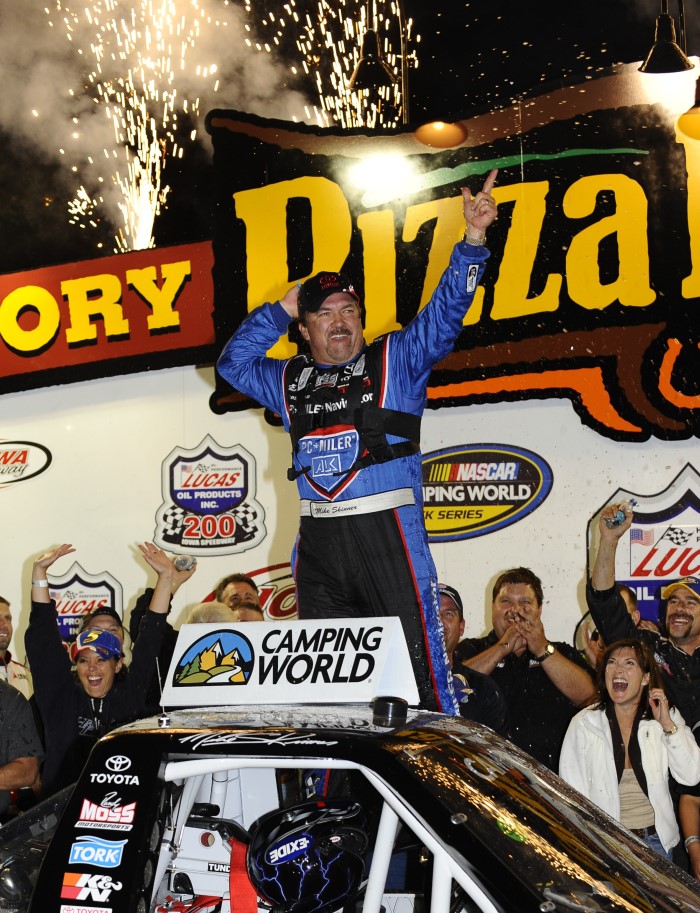 Mike Skinner won his second race of the season in the NASCAR Camping World Truck Series, leading 180 of 200 laps in the Lucas Oil 200 at Iowa Speedway.

Skinner pulled away from Aric Almirola on a restart with four laps to go on the 0.875-mile track, winning by 1.37 seconds, but he did have a few anxious moments.

"The motor died coming off (Turn) 4," Skinner said. "I don't know if it was a (fuel) pickup thing or vapor lock or what it did. I think it might have boiled some fuel or something. I just nursed her along there and this thing was so fast through the corner, it didn't matter what it was doing tonight."

It was the second victory for Randy Moss Motorsports. Skinner delivered the first in a rain-shortened race at Kansas Speedway in April. Skinner's victory was the 27th of his truck career.

Skinner's Toyota started the inaugural race at Iowa from the pole, extending his all-time lead in the series to 47, but was passed immediately by Matt Crafton. Skinner regained the lead on Lap 18 and, with the exception of three laps led by Almirola gained through pit strategy, was in front to the checkered flag.

"It was cool, really, really cool," Skinner said. "This one is for (owner) Randy Moss. He's a big race fan and part owner in this team with David Dollar."

Almirola was running ninth when a caution came out on Lap 111 and the entire field pitted on separate stops for fuel and tires. Almirola took only two tires and fuel and moved into the lead. He wasn't able to hold off Skinner, but he maintained second the rest of the way.

"Our first stop was really bad and we just lost so much track position," Almirola said. "I told (crew chief) Doug George we had to get it back somehow, someway, so we took two tires. That was a great call on Doug's part. Thank goodness this tire was hard enough."

Almirola's second was his best finish in 41 truck starts.

Colin Braun continued his strong second half of the season by finishing third. He passed Ron Hornaday Jr. for the position with 10 laps to go.

Hornaday's fourth place allowed him to increase his lead in the championship standings to 225 over Crafton, who finished sixth. Johnny Sauter was fifth. Austin Dillon, despite spinning early in the race, finished 12th in his series debut driving the No. 3 Chevrolet owned by his grandfather, Richard Childress.