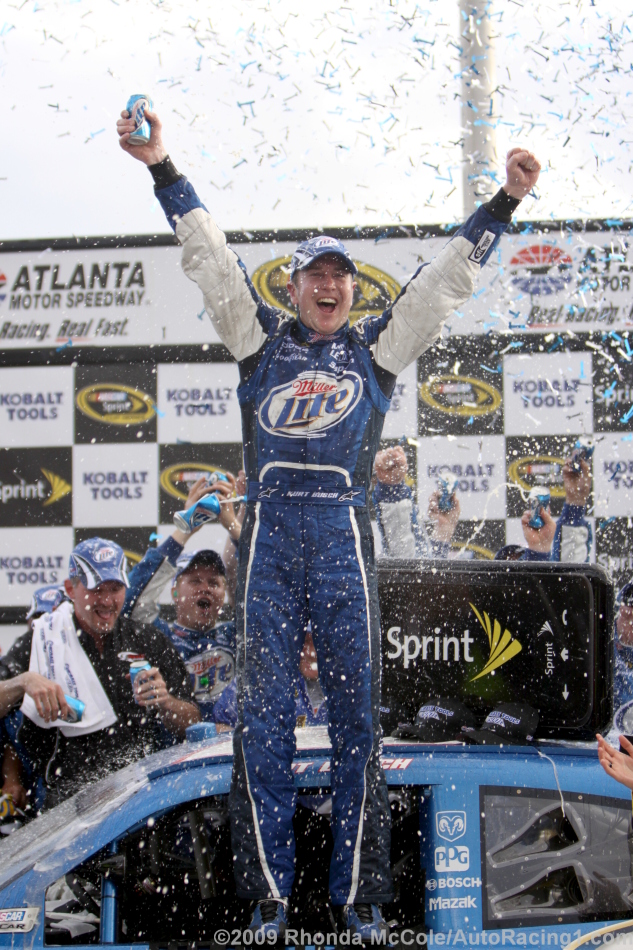 After a week off to rethink and recalibrate strategies and store some extra adrenalin in the driver's tanks, the NASCAR Sprint Cup Series returns to action this Sunday night with the running of the Pep Boys Auto 500 at the Atlanta Motor Speedway.

The fastest track on the Sprint Cup schedule is expected to produce one hot night in "hot 'Lanta" when the green flag falls. This race has a huge potential for shaping the line up for the 2009 NASCAR Sprint Cup Chase For The Championship. By the time this race is over Sunday night, a few of the teams are going to have smiles on their faces and a huge sense of relief. Some of the teams are going to be feeling the butterflies in the pit of their stomachs while realizing that it's going to be white knuckle time when the series hits the Richmond International Raceway the following weekend where the final line up for the 12 man Chase will be determined. A couple more of the teams may find themselves accepting the fact that their championship hopes are over for good and it will be time for them to start focusing their attention on the 2010 season.

The only teams that are completely relaxed at the moment belong to drivers Tony Stewart, Jimmie Johnson and Jeff Gordon. They have already clinched their starting berths in this year's Chase and are free to concentrate on race wins and the all important ten bonus points that comes with them.

For the rest of the teams in positions four through 12 in the championship standings they will be seeking two magic numbers during the Atlanta race. The magic numbers are 196 and 162. The numbers are from a math formula based on the points separation between any driver in the top 12 of the championship standings and the driver who is 13th in the standings. Essentially it means that any driver who leaves Atlanta Sunday night 196 points or better ahead of the 13th driver will automatically clinch a starting berth in the Chase line up. Mathematically speaking, eight drivers currently in the top 12 could possibly clinch a Chase berth. But the reality of it all suggests that only three, possibly four, of them will leave Atlanta as a championship contender.

For the rest of the Chase contenders they will have to focus on the other magic number: 162. Any driver in the top 12 who leaves Atlanta 162 points or better ahead of the driver in 13th will only need to start race #26, in Richmond, to clinch a Chase opportunity.

In regards to teams automatically clinching their Chase hopes this Sunday night in Atlanta, the main focus will be on drivers Denny Hamlin, Carl Edwards and Kurt Busch. Hamlin, and his #11 Joe Gibbs Racing Toyota, is currently fourth in the championship standings and is 230 points ahead of 13th. That means he can lose up to 34 points in Atlanta and still clinch a Chase spot. There's also some automatic clinch scenarios for Hamlin. If he finishes third or better Sunday night he automatically in. A fourth place finish with the five bonus points for leading at least one lap also puts Hamlin in the Chase.

Carl Edwards, in the #99 Roush Fenway Racing Ford, also has a better than good chance of officially clinching a Chase berth Sunday night. Fifth in the standings, and 199 points above 13th, Edwards can afford to lose three points at Atlanta. Just like Hamlin, the 99 team has some mathematical scenarios that will put the team into the Chase. Needless to say a win Sunday night seals the deal. That's very possible. Edwards has displayed his famous post race back flip at Atlanta in the past.

Kurt Busch, in the #2 Penske Racing Dodge, is sixth in the standings and has a 192 points separation from 13th. He needs to gain an additional four points to clinch a Chase berth and there are more than a few scenarios that could make that happen. Chief among them is winning the race. Busch and company will be bringing the same Dodge to Atlanta that they used to completely dominate and win the race there this past March.

Sunday night's Chase drama will emanate from positions seven through 11 in the standings. But that drama has been greatly enhanced by who's in positions 13 and 14. Pre season Chase Favorite Kyle Busch, and his #18 Joe Gibbs Racing Toyota team, hit a speed bump in recent months and found themselves lacking in top five finishes. They also found themselves 13th in the championships standings 34 points away from the all important top 12 that determines the Chase line up.

Busch and his team are expected to be their usual formidable selves Sunday night in Atlanta. The least case scenario says that the team needs at least a top ten finish to keep their Chase dream going. Do not expect this driver to sit back and hope that one of the team's in the top 12 has a bad night that will benefit his cause. He has a good track record at Atlanta, and a great track record at Richmond. Look for this team to try to race their way into the Chase.

The same applies to Brian Vickers and his #83 Red Bull Racing Toyota team. Vickers is ranked 14th in the standings but is only 39 points away from the top 12. Three weeks ago this team wasn't even considered as Chase contenders. But that all changed following Vicker's stunning win at the Michigan race last month. Vickers was a strong contender during the March race at Atlanta and will also be looking for at least a top ten so he can launch a Chase run at the Richmond race.

Mathematically speaking, drivers Clint Bowyer and David Reutimann have not been officially eliminated as Chase Contenders. Bowyer, driver of the #33 Richard Childress Racing Chevrolet, is 15th in the standings and 112 points away from the top 12. Reutimann, driver of the #00 Michael Waltrip Racing Toyota, is 16th and 160 points out of the top 12. But let's be realistic here. It's going to take a racing miracle of unimaginable proportions for either of these teams to make the Chase and their efforts may likely end Sunday night at Atlanta.

The race has 46 entries. Nine of those entries are on the go or go home list meaning those teams are outside of NASCAR's top 35 in owner's points and must earn a starting berth in the race based on their qualifying speed.

Two of those entries, Terry Labonte and Bill Elliot, have past champions provisionals available to them if they can't qualify on speed..

The defending race champion, from October of last year, is Carl Edwards who started the race from the fourth position. The winner from Atlanta's spring race in March is Kurt Busch who started from the second position.

Among active Sprint Cup drivers Bobby Labonte has the most win at Atlanta with six. Dale Earnhardt Sr has the most all time wins with nine. The Intimidator also leads the stats for the most top five finishes with 26.

NASCAR veteran Geoffrey Bodine holds the track qualifying record, 197.479 MPH, set in November of 1997. Buddy Baker and Ryan Newman shares the record for the most poles at Atlanta with seven each.

In the fall of 1982 there was a record 45 lead changes from that race. On the opposite extreme the fewest lead changes was six which occurred three times with the last time dating back to 1963.

Weather is not expected to play a major role in the race as it has over the past few weeks. The National Weather Service forecast calls for partly cloudy conditions with high and low temperatures of 84 and 63 degrees. However there is a twenty percent chance of precipitation this weekend that may bear watching.

The Atlanta Motor Speedway was opened in 1960 and since that time has been a major contributor to NASCAR history.

Over the years the track was reconfigured to its present 1.54 mile quad oval and became the fastest speedway on the Sprint Cup circuit.

The track has 24 degrees of banking in the turns. The front stretch measures 1,471 feet while the back stretch is 1.380 feet.

THE TELEVISION BREAKDOWN (ALL LISTED TIMES ARE EASTERN)

Live coverage of Atlanta Sprint Cup activities will begin on Saturday morning with an 11am practice session that will be broadcast by the Speed Channel.

Also on Saturday Speed will cover the final, or happy hour, practice session at 1pm followed by the qualifying session at 430pm.

The Pep Boys Auto 500 will be broadcast live by ESPN beginning at 7pm. Re broadcasts of the race will be at 230am Monday morning on ESPN2, Tuesday morning, 11am, on ESPN2 and Wednesday afternoon, 12pm, on Speed.