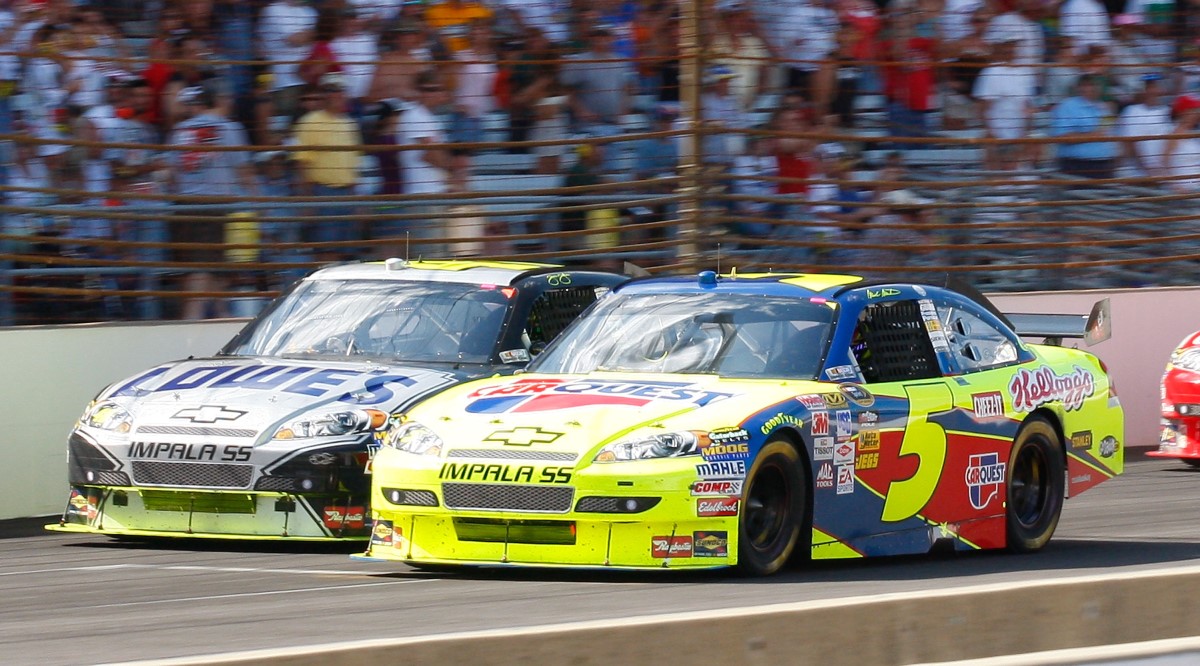 The elite teams of NASCAR's three national touring series spent the weekend in the state of Indiana. By Sunday night we witnessed a 33 year old driver, and three time Sprint Cup champion, win his third race at Indy. We also watched the young driver hold off the last lap advances of a 50 year old icon. We shook our heads at the sight of a sure fire race winner get nailed by a speeding ticket. We also watched another 50 year old icon set up a new record in the truck series and we watched a fan favorite back flip his way to victory lane again. With those thoughts in mind let's begin with:

THUMBS-UP to driver Jimmie Johnson and crew chief Chad Knaus. NASCAR's dynamic duo used patience, good pit work and some great driving by Johnson to pull off their third win of 2009, the 43d career win and their third win in the Allstate 400 at the famed Indianapolis Motor Speedway.

Coming off a double file restart, following the final caution flag of the race, Johnson lined up on the outside of race leader Mark Martin and used a side draft maneuver to take the lead for good. Martin did all he could to get around the new race leader during the final laps and that forced Johnson to take evasive defense tactics to keep his race rival and team mate behind him.

That moment in this race leads to a WHAT’S-UP with Martin, and crew chief Alan Gustafson, regarding their restart decision coming off of the final yellow flag? Their decision to pick the inside lane for the double file restart led to Johnson's winning edge.

But Martin also deserves a THUMBS-UP for setting the fast time during Saturday's qualifying session. After turning in a lap of 49.436 seconds, the 50 year old icon came over the radio and said "I wanted to run a 49 flat but I'm just too old."

Now let's get to it: the biggest WHAT’S-UP of the weekend. What in the world was Juan Pablo Montoya thinking when he got nailed for speeding down pit road? Montoya, and his Earnhardt-Ganassi Racing Chevrolet, completely dominated the Allstate 400 to the point of virtually turning the race into a snooze festival. With approximately 26 laps left in the race he came down pit road, for his final pit stop, with a five second plus lead. He exited the pit stop with an official notice from NASCAR that said he was speeding on pit road and would have to return for a drive through penalty.

The Indianapolis Motor Speedway's pit road was placed at 55 MPH. NASCAR observes a policy of a five MPH cushion with pit road speed being determined by eight computerized scoring loops. Montoya was clocked at 60.06 and 60.11 MPH while driving through two different segments of pit road.

Denying that he was speeding on pit road, a livid Montoya came over the in car radio and said "thank you NASCAR for screwing up my day. We had this one in the bag and they screwed us. I was not speeding." Montoya insisted that the green lights, on his pre set tachometer, were on indicating that he had not exceeded the pit road speed. He even went so far to say that "I swear on my children that I was not speeding."

But NASCAR computerized loops are highly accurate and a brilliant moment in time was lost. Montoya led 116 of the 160 laps in the race and was completely untouchable. A sure fire win became an 11th place finish. One can only wonder what the motivation was to get him to push the envelope on pit road the way he did. WHAT’S-UP indeed.

A brief pause here why all of you yell "wait a minute, he blew an engine and finished 36th in the Allstate 400."

You're right, that's exactly what happened. But perhaps we need to accent the positive here. The Hendrick Motorsports #88 team arrived at Indy with a brand new race car. It was the first car constructed directly under the supervision of recently installed crew chief Lance McGrew.

Earnhardt set the third fastest time in qualifying. All during the race he was always in the top ten. He got as high as second at one point in the race and never got any lower than ninth before the engine failed. Also bear in mind that blown engines within Hendrick Motorsports are a very rare commodity these days.

Also bear in mind that Earnhardt put in this driving performance while suffering the extreme effects of a stomach virus all weekend long. Out of concern, the team had driver Brad Keselowski suit up Sunday afternoon anticipating that Earnhardt might be too sick to finish the race.

This same new car will be used next weekend at Pocono. This might be something to keep an eye on.

WHAT’S-UP with Joe Gibbs Racing-JGR and all of those problems at the Indy race? It started with Denny Hamlin who rolled down pit road with his shifter swinging loose in his right hand due to a broken drive shaft. He returned to the race 16 laps later but had to settle for a 34th place finish.

Then there was the matter of Kyle Busch whose Sprint Cup championship hopes took another hit on lap 57 when a blown tire sent him into the wall. He returned to the fray 48 laps later and finished 38th.

Kyle Busch has been a formidable presence while participating in NASCAR's Camping World Truck Series and Nationwide Series. He started strong at the beginning of the Sprint Cup campaign. However, there has been some horrible luck as of late with the Cup effort and the team has failed to score a top five finish in the last ten events.

This latest setback saw Busch fall to 14th in the championship points and he's now 82 markers away from making the all important top 12 which determines the line up for the 10 race Chase For The Championship.

He needs to turn this around quickly because there's only six races remaining before the Chase begins. At the beginning of the season he was heavily favored to win the championship. The way things are going right now there is the real possibility that he may not make the Chase at all.

On the other hand THUMBS-UP for JGR rookie Joey Logano. The need for a pre race engine change moved his Toyota from the 18th starting berth to the rear of the field. With a great deal of patience and determination, well beyond his 19 years of age, Logano worked his way to a very impressive 12th place finish.

Following the July 11th Chicago race Johnson attempted to send Busch a text message. Busch said that somehow he never received the message. He also pointed out that, due to busy schedules, last Friday was the first time that he was able to talk things over with Johnson. All seems to be well for at least the moment.

THUMBS-UP to Carl Edwards for winning Saturday's NASCAR Nationwide Series race at the O'Reilly Raceway Park. It was good to see that traditional victory lane back flip again. Edwards took the lead for good with 21 laps left in the race and held off series championship rival Kyle Busch, by a margin of 0.676 seconds, to claim his second win of the season. Due to running both this race and the Sprint Cup event at Indy, Edwards missed Nationwide Series qualifying and had to start this race from the rear of the field.

But WHAT’S-UP with the Nationwide Series' pace car driver who triggered a very bizarre accident in this race? Rookie driver Trevor Bayne, who set the fast time in qualifying for Michael Waltrip Racing, was leading the event with Steven Wallace right behind him. A lap 36 crash brought out the yellow flag. The two drivers took the yellow flag and slowed their pace heading into turn one.

That's when they discovered that the pace car driver had made an early entry into turn one and was directly in front of them sooner than expected. Not wanting to chance a penalty for passing the pace car, or worst yet running into it, Bayne hit his brakes. Wallace had zero reaction time available and hit the back of the Bayne car. Both race cars spun to the bottom of turn one and sustained damage.

Some good pit road work allowed both drivers to continue the race. Bayne finished a very credible seventh while Wallace scored a career high fifth. But the fact of the matter is this accident should have never happened to begin with. It would not have happened if the pace car driver would have waited until at least turn two to blend in front of the race leaders.

Rusty Wallace owns the Chevrolet his son Steven drives and is also a member of the ESPN broadcast team. It must have been difficult for Wallace to sit in the television booth and do color commentary on this accident with a calm demeanor. It's likely that he had the flames of hell dancing in his eyes during this process.

THUMBS-UP to another 50 year old icon who wowed us all during last Saturday's NASCAR Camping World Truck Series event at the O'Reilly Raceway Park. Ron Hornaday Jr set an all time series record by winning his fourth consecutive race. It wasn't an easy win. Hornaday had to fend off a furious late race challenge for long time rival, but good friend, Mike Skinner. The sight of the two trucks running side by side in the waning laps of the race made for riveting television.

THUMBS-UP to the Camping World Truck Series for putting on not only the best race of the NASCAR weekend in Indiana but also for outshining any motorsports event that you could name that was held during the same time period. This series really is that good.

The final WHAT’S-UP goes to the Speed Channel for airing advertising that promoted "Digger", the animated Fox Sports mascot, and the "Digger Dot Com Store." I was under the impression that we would not have to deal with that fat rat, or whatever it is, until at least next February.

The final THUMBS-UP goes to Tony Stewart's dad, Nelson, who made it to the Indianapolis Motor Speedway Sunday to see his son race despite having to endure some dire circumstances the night before. It seems that Mr. Stewart flipped the sprint car he was driving Saturday night at a dirt track race. By the way he's driving that sprint car at the age of 71 years young. When asked about the accident the next day he just smiled and said "I think I ran out of talent."