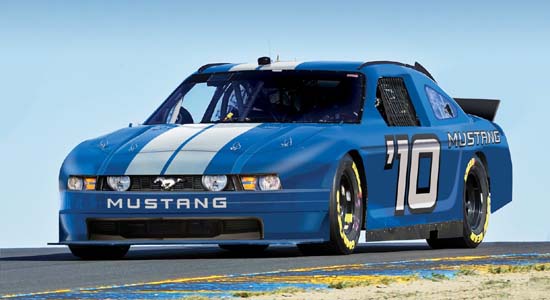 Mustang is already the most successful single nameplate in Ford Racing’s professional racing history, but it hasn’t competed in NASCAR—until now.

Brian Wolfe, director of Ford North America Motorsports, made the announcement today that Mustang will debut as part of NASCAR’s new car limited rollout in the 2010 Nationwide Series.

“We’re excited about Mustang coming to NASCAR," said Wolfe. “It’s the most successful product nameplate in racing history, and it seems only right that it should be coming to the most popular form of racing in North America.

“We had been talking with NASCAR for some time about Mustang as part of its vision for a ‘muscle car’ rollout for the Nationwide Series. We both saw it as a way of differentiating the series from Sprint Cup," said Wolfe. “We loved the idea, so we jumped on the chance to extend Mustang's racing legacy to a new series reaching a huge and loyal audience. Mustang has dominated other forms of racing, including NHRA drag racing, Grand-Am Cup road racing, and Formula D drifting, and now it’s coming to NASCAR Nationwide.

“I think race fans—and Mustang loyalists—will be very pleased when we publicly roll out the first car later this fall."

Ford Racing has gone through the official NASCAR submission and approval process for the new car, and, once templates are finalized, production of Mustang parts will start so teams can build the first cars for testing later this fall.

“We’re excited about the new car in the NASCAR Nationwide Series, and particularly the new body styles such as the Ford Mustang," said NASCAR President Mike Helton. “It’s going to be one good-looking race car."

“We’re excited about being able to race Mustang in front of our loyal NASCAR fan base and know it’s going to win races and championships just like it has in every other series it has competed," said Wolfe. “The Mustang created the pony car movement when it debuted in 1964. Now, the NASCAR Mustang has the opportunity to create a whole new look to stock car racing at its highest levels."

MUSTANG IN RACING
From the time the very first Mustang rolled off the assembly line in 1964, it was destined to race. Whether it be from the ‘60s drag racing cars and the Shelby GT350-R SCCA racers, to the Trans-Am Boss 302 Mustangs of the seventies, to the IMSA and Trans-Am cars of the ‘80s and ‘90s, to the drag race and sports car racing Mustangs of today, Mustang has been a winner.

Mustang currently competes professionally in the NHRA Funny Car and Pro Stock divisions and places like the Grand-Am Koni Challenge, SCCA World Challenge, and the Mustang Challenge Series. In addition, thousands of Mustangs see action by grassroots racers at road courses and drag strips all across America.

Since its debut in 1964, Mustang has compiled more than 2,000 professional racing victories in NHRA, Grand-Am, IMSA, SCCA, NMRA and NMCA, as well as other racing series.

THE 2010 MUSTANG
Muscle goes modern for 2010 as the Ford Mustang—America’s favorite muscle car for 45 years straight—hits the streets with a new exterior design; new world-class interior featuring well-crafted materials and updated technology; and a V-8 with 315-horsepower and an even throatier signature Mustang exhaust sound.

In true Mustang tradition, there is a “steed for every need." Customers can choose from a V-6 or V-8 with their choice of coupe, convertible or innovative glass roof, plus several new options and features delivering the opportunity for customers to personalize their cleaner, meaner-looking Mustangs.

The new Mustang was recently launched through the The ‘10 Unleashed campaign, which gives enthusiasts the chance to unleash their Mustang side behind the wheel of the new 2010 Mustang—whether it be drifting in Japan like world champion Vaughn Gittin Jr. or customizing a new Mustang using Ford Racing Performance Parts.

Through Aug. 15, consumers may submit their own Mustang dream experience in 250 words or less via Ford’s The ‘10 Unleashed site at www.the2010Mustang.com. Written submissions will be judged based on creativity, uniqueness and execution of idea. Winning submissions will be selected every few weeks, and winners will be able to turn their Mustang experience into reality.