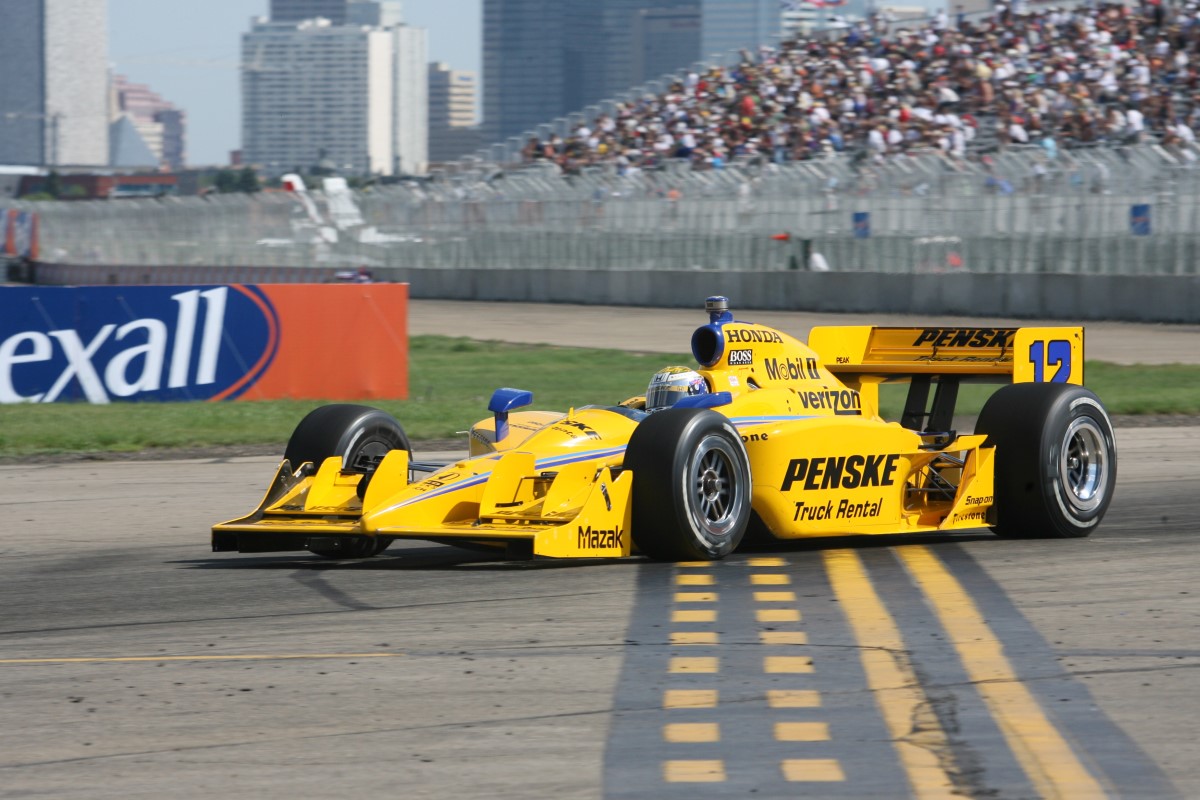 Early on, the Rexall Edmonton Indy was reminiscent of the October race in Australia — Will Power leading Ryan Briscoe. Nine months later, different race, different result … and some might say a different driver.

"It caps a perfect weekend," said Power, who has finished 1-2-3-5-6 this season in part-time duty for Penske Racing.

The race was headed for the first without a caution in IndyCar Series history until Tomas Scheckter's No. 23 MonaVie car for Dreyer & Reinbold Racing made contact with the concrete barrier in Turn 10 of the 1.973-mile, 14-turn circuit on Lap 94. The previous low was one yellow flag for two laps at Infineon Raceway last August.

A scary situation developed during what was supposed to be a routine Lap 34 pit stop when the fueling hose remained open after the stop, splashing 100 percent fuel-grade ethanol onto the side of the car and on driver Tony Kanaan. The fuel ignited, with Kanaan scrambling to extricate himself from the car as Team Penske and Panther Racing crew members doused the car to retard the flames.

Kanaan suffered burns on his thumbs and face and will be re-evaluated by Indy Racing League medical personnel this week.

Dixon holds a 380-377 lead over Target Chip Ganassi Racing teammate Franchitti as the series heads to Kentucky Speedway on Aug. 1 — an oval slice in a five-race slice of road/street courses. Briscoe is third, 14 points arrears. It was the eighth top-five finish of the season — and seventh in a row — for Dixon.

WILL POWER (No. 12 Penske Truck Rentals): "I'm very happy. The Penske Racing crew did an incredible job. I'm really enjoying being a part of Penske Racing. I'm not stressed, I'm just taking it one race at a time and doing my best. I've got to thank Roger (Penske) for the opportunity. Today was a great day."

HELIO CASTRONEVES (No. 3 Team Penske, finished second): "I feel great. It's a shame that a one, two, three team finish slipped away, but our goal was to stop the Ganassi guys, and we were able to do that with Will (Power)'s win. When Will came on board, we never had a doubt that he would be a top race contender, and it's great that his win keeps championship points from our opponents. It was a well-deserved win. Penske Racing did an incredible job."

SCOTT DIXON (No. 9 Target Chip Ganassi Racing, finished third): "It was one of the toughest races we've ever run. It's definitely a tough circuit, and it gets a lot tougher when you don't have the best car. We were definitely hanging on. We seemed to be pretty good for about half the stint on the Firestone tires, but we just abused them too much. After that it was just so slippery I just had to hang on. But it was a great day for Team Target. We gained some valuable points; I think we're in the points lead so we've switched with Dario (Franchitti). It was just a very tough day."

RYAN BRISCOE (No. 6 Team Penske, finished fourth): "It was a tough race without any yellow flags. It was tough out there. Luckily I'd taken my fluids before the race. That's probably one of the tougher races I've done but the Team Penske guys did a great job."

DARIO FRANCHITTI (No. 10 Vaseline, finished fifth): "It was a pretty average day for the Vaseline car. I didn't get much help from Marco when I was coming up to lap him. I helped him when I was a lap down at Watkins Glen, and he totally screwed me for 10 laps. I'll remember that one. Otherwise Will did a hell of a job. He was fabulous all weekend. Congratulations to those guys. We'll come back and get them next week."

PAUL TRACY (No. 15 Edmonton Honda Dealers/woundedwarriors.ca, finished sixth): "I have mixed emotions about the race today. It was obviously a good race for the Edmonton Honda Dealers – Wounded Warriors.ca – KV Racing Technology car, but I have a bit of a heavy heart with Mario (Moraes) and myself touching on the first lap, which sent him spinning, and I didn't realize it had put him out of the race. I feel terrible for that and it has kind of put a damper on the rest of the weekend. Other than that, we had a little bit of a tire issue on the first stint and once we had the pressures right, the second and third stint the #15 car was pretty good and we just ran around, pretty much alone for the whole race."

GRAHAM RAHAL (No. 02 McDonald's Racing Team, finished seventh) "At the start, I saw (Mario) Moraes coming, and I said 'Forget it, I'm just going to let him go around rather than get hit.' He and his teammate collected each other anyway so that helped. I really just wanted to make it through the first lap so I thought losing a position or two was better than getting taken out again. I saw Moraes really early pull to the inside, and he wasn't on me, but I didn't want to see last year happen again. Then after that I was just conserving fuel, and I felt like we were one of the guys that went the longest. And then we pitted a little bit early on the second stop to try and get out from behind Wheldon. Then we put the blacks on at the end and the car felt diabolical for the first 15 or 20 laps. We started to get it cured a little bit by using my bars and with the tires wearing it helped out a little bit, but I just never quite had the pace that I did on the reds. I wish I had the reds there at the end to try and challenge PT (Paul Tracy) because he didn't look too strong at the end either."

ROBERT DOORNBOS (No. 06 Newman/Haas/Lanigan Racing, finished ninth): "We had a good start. Coming out of the chicane, I had good momentum building up, and I was in the middle of a sandwich between PT (Paul Tracy) and (Raphael) Matos, I think, and I managed to out-brake two cars, so that was good and I just slotted in line and had a good first lap. I was following Graham (Rahal) and saving fuel and trying to think of some strategy, hoping for some yellows but nothing happened, so we just started running on higher fuel maps and pushing to try to keep the position. We had a good first stint and we were pushing with both cars and at the pit stop everything went well, and I got out I got held up a bit and that's when I lost track position with the train of cars in front of me. There wasn't much action going on because there was no one for me to race nearby. It was fun. It was a hard race for P9, but we brought both cars back home in the top-10 which is good for now. We'll just work harder to close the gap to the top teams. Near the end, I had to let Power by but it was good to see the Penske pace and to see that we could follow them and drive the same lap times and that was quite positive."

TONY KANAAN (No. 11 Team 7-Eleven): "I have burns on my hands and face. In the next couple of days we will know the extent. I could be uglier than I am now. I am glad we are ok, it was a scary moment. I have to thank all the other teams, Penske, the Panther boys and everybody who came to rescue me. It's pretty remarkable and its shows the strength of the IndyCar family. We are competitors over the weekend but when somebody needed help I got it. I am glad I am OK. The fuel probe stayed open, it was open all the way even when the fueler pulled out. When he pulled out there was nothing we could do. It seems like nothing can go right this year."

MARCO ANDRETTI (No. 26 Mott's Clamato Caesar, finished 10th): "The No. 26 definitely wasn't perfect today, but that's racing. The perfect car isn't possible. We went out and kept pushing but just got caught behind a couple of slower cars and the leaders were able to increase their gap on us. The Mott's boys worked hard all day and we'll take the top-10 finish. It put us up one position in points, and we're closing the gap on fifth. Hopefully we'll find the points we need in Kentucky next week."