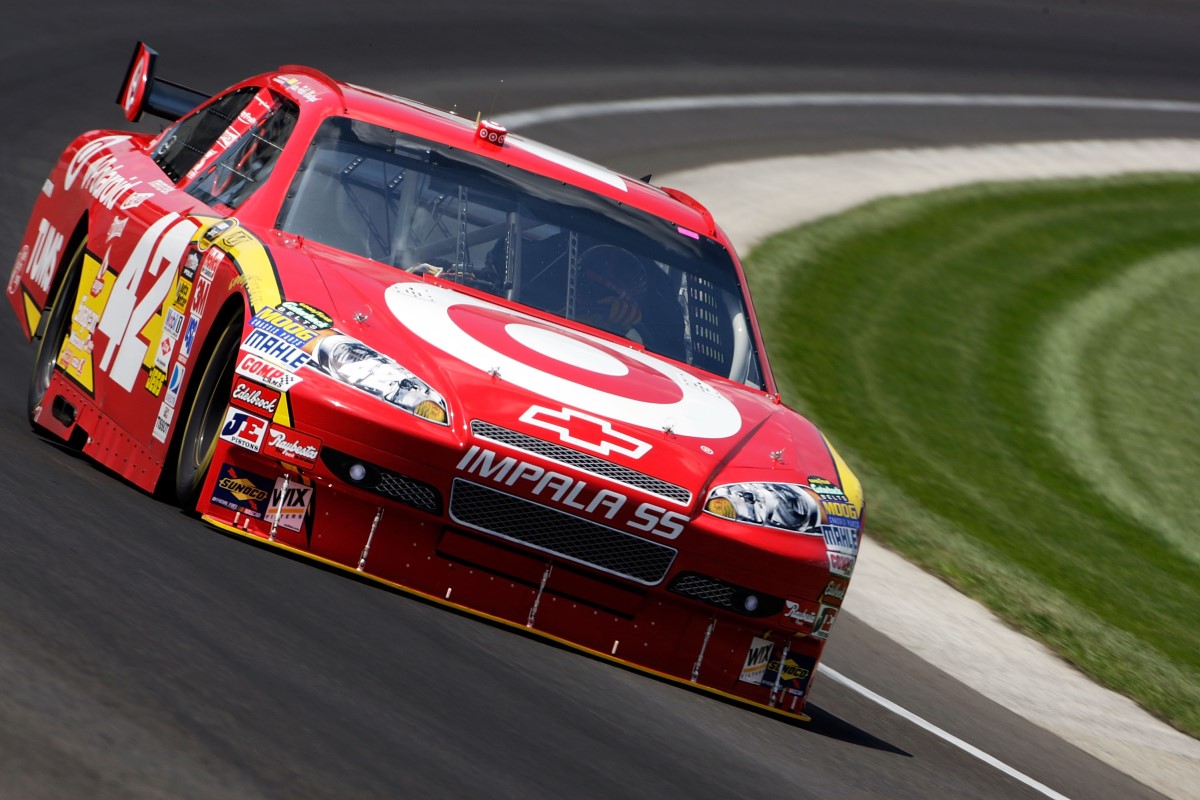 Jimmie Johnson became the first driver to score back-to-back Allstate 400 at the Brickyard victories on Sunday when he held off Mark Martin for his third career win at Indianapolis Motor Speedway.

On a day where it appeared Juan Pablo Montoya was going to cast his own spot in IMS history by becoming the first driver to win both the Indianapolis 500 and the "400," Johnson used a Turn 2 outside pass of Mark Martin on the Lap 137 restart to take the lead and stay there, beating Martin, driver of the No. 5 CARQUEST/Kellogg's Chevrolet and pole winner for the race, by .400 of a second at the finish.

Not only did Johnson's win make him the race's first repeat winner, but he also has a three Allstate 400 at the Brickyard victories, one shy of event record holder and teammate Jeff Gordon, who finished ninth. Johnson's first win on the daunting 2.5-mile IMS oval was in 2006.

Martin did not make it easy for Johnson at the end. He pulled from more than .7 of a second behind Johnson on Lap 154 to almost Johnson's bumper as they took the white flag on Lap 160.

"I hope the fans enjoyed that race," said Johnson. "I can't say enough about this race team and all of Hendrick Motorsports and that battle with my teammate Mark Martin. Damn, he was fast. For an old guy. Those last 15 to 20 laps, man, we had to drive it so hard to stay ahead of the 5. I was better in (Turns) 3 and 4, and he was better in 1 and 2. It was kind of a give-and-take thing going on."

There were a total of three cautions for 14 laps.

It appears that NASCAR, that has been accused of being red neck for decades, was not going to let a foreigner win the Allstate 400 race. Colombian Montoya had them all covered so easily, it looked like the 2000 Indy 500.

Montoya led 116 laps and had a 5-second lead when he headed to pit road for a routine stop with 35 laps remaining. NASCAR flagged him for speeding on his way in, and the penalty knocked him out of contention.

Crew chief Brian Pattie begged his driver to calm down and focus on salvaging a solid points day, to no avail.

Johnson didn't take the lead until lap 137, but stayed ahead of the field the rest of the way to notch his second win of the Sprint Cup Series season.

A cut tire caused Kyle Busch to finish 38th and drop out of contention for the Chase. The bad day cost him four spots in the standings, and he's 14th with six races left to set the 12-driver Chase field.

TONY STEWART (No. 14 Old Spice/Office Depot Chevrolet): "It was awesome. We had Hendrick motors and chassis one, two, and three. We are really proud of our guys on the Office Depot Old Spice team. We never could get the tightness out of the center of the car. Any time we made a change, it freed the entry up or the exit up. I'll take a third any day. The guy I feel sorry for is Juan Pablo Montoya. He had an awesome car and was giving us a clinic today. Jimmie and Mark put up a great show, and it was awesome battle to watch from where I was sitting."

DAVE BLANEY (No. 66 Prism Motorsports Toyota): "It's nothing, really. Just a brake problem."

DALE EARNHARDT JR. (No. 88 AMP Energy/National Guard Chevrolet): "We haven't had engine problems, so I assume it was driver error. I broke the valve train on the last pit stop and a couple of the pieces dropped to the bottom of the motor. They rattled around and must have blown the engine. I thought we had a good car, one of the best there for a while. We could have finished anywhere from fifth to 10th if things had gone right. I felt great today. I'm back to 100 percent."

MICHAEL WALTRIP (No. 55 NAPA Toyota): "We were about an average car today, about 24th or 25th. The motor messed up, and that was all."

BRIAN VICKERS (No. 83 Red Bull Toyota): "It was a great race, but we are not satisfied. We had a really good car in the test and here in practice. We really wanted to come here and win the race. The 5 (Mark Martin) and 48 (Jimmie Johnson) were really strong. I think when we were at our best, and when we had the track position, we could have stayed in front of them. It was very difficult to pass. Track position meant a lot, and the guys did a great job."

SAM HORNISH JR. (No. 77 Mobil 1 Dodge): "It was disappointing, for sure. We had a much better car here than we had here last year. We know we can run fast. We just need to get a little better track position, and the driver needs to be a little bit more patient. So we'll just do what we can to get ready to come back next year. Now we'll go on to Pocono. Obviously, Pocono handles a lot like this track does as far as what you need to have on the car, so I'm really looking forward to that."

GREG BIFFLE (No. 16 3M/Pistonz Earplugs Ford): "We had a really good car. The 3M/Pistonz Earplugs Ford Fusion was really good. We had to save fuel there at the end. We only lost one spot, but I had to let Tony Stewart go there at the end. I hated to do that. It's hard for a race car driver to have a fast race car and lift on the gas. But that's what we needed to do to finish."

A.J. ALLMENDINGER (No. 44 Hunt Brothers Pizza Dodge): "We were average today. We just had a 20th place car all day. We were struggling with overall grip. We didn't have the balance that we did yesterday in practice, so we were struggling there. And, when you're slow down the straightaway you can't pass anyone there."

ROBBY GORDON (No. 7 Johns Manville Toyota): "We just didn't have a very good day. We ended up 28th. We were in position to get the 'lucky dog,' and we got a little loose and the 96 (Bobby Labonte) got by and got it. For us, it was a decent day for the Johns Manville Toyota. We've just got to work a little harder. We haven't caught up to these guys yet, and we've got a lot of work to do."

CARL EDWARDS (No. 99 Aflac Ford): "I couldn't get my Aflac Fusion to pass anybody; it was very tough to pass. Those double-file restarts, I thought that was going to be a bad thing, but it really helped. It was a long, hard-fought day punctuated by those exciting restarts. That was the only way I could get any positions. It was a decent points day. I don't know where that puts us, but it could have been a lot worse. Goodyear did a great job with the tires, that's for sure. I have to commend them for their effort. I can't imagine how much money they spent to come out here and make it a great race and a safe race for all of us."

JEFF GORDON (No. 24 DuPont Chevrolet): "We got a top-10 finish, but it just wasn't the kind of day we were searching for. We were real, real tight in traffic. I know a lot of guys were. I mean, we needed to go green the whole way. We actually had great fuel mileage there at the end and great position. The car was really good in clean air. We could really go fast and even pass cars when we'd get going. But on those restarts if you got to the outside, and even if you didn't, it was real hard to pass."

KYLE BUSCH (No. 18 Snickers Toyota): "I thought it was loose on all that run (before the tire blew). It was sliding the right rear a little, but I got behind the 71 car (David Gilliland), a lapped car, and in trying to get around him, it built up a tight condition real bad. It vibrated for two laps and blew out. It's either our cars or the tires, I don't know which. I thought we had a decent run going. We were running seventh, but the guys in the pits got us up there."

JUAN PABLO MONTOYA (No. 42 Target Chevrolet): (About speeding penalty): "It kind of sucks. But it is what it is. I thought I wasn't speeding. I was on the lights every time. It is what it is. We haven't had to deal with that before. Once it happens, you can't change it. It's pretty frustrating." (About dominant lead, comparing it to Indy 500 win in 2000): "Actually, it reminded me of the last time I led here. It was kind of easy, to be honest. I was cruising. I was super fast."

MATT KENSETH (No. 17 DeWalt Ford): "To finish 10th exceeds my expectations with the way we have been running and finishing lately. We finished a little better than we ran today. We had good pit stops, had no problems and had a solid finish. We have to get running better and finishing better. I'm certainly happy with 10th the way we've been doing lately. We had the balance of the car a little better. We fought loose most of the day. I never got it to drive exactly the way I wanted. We kept sneaking up on it and got it handling better loose. We kept sneaking up on it and got it better around the cars I was driving around. Even when we had the balance good, we couldn't keep up. You can't blame it all on power; we just have to make our overall package good."

JOHN ANDRETTI (No. 34 Taco Bell Chevrolet): "It wasn't as good day. I don't know why the handling of the car was so totally different than what we had in practice. We worked on it throughout the race and never got it better. We had battery and electrical issues. We had to change a battery under green and lost some time. It was not a picture-perfect day. The only good thing is the car is still in one piece."