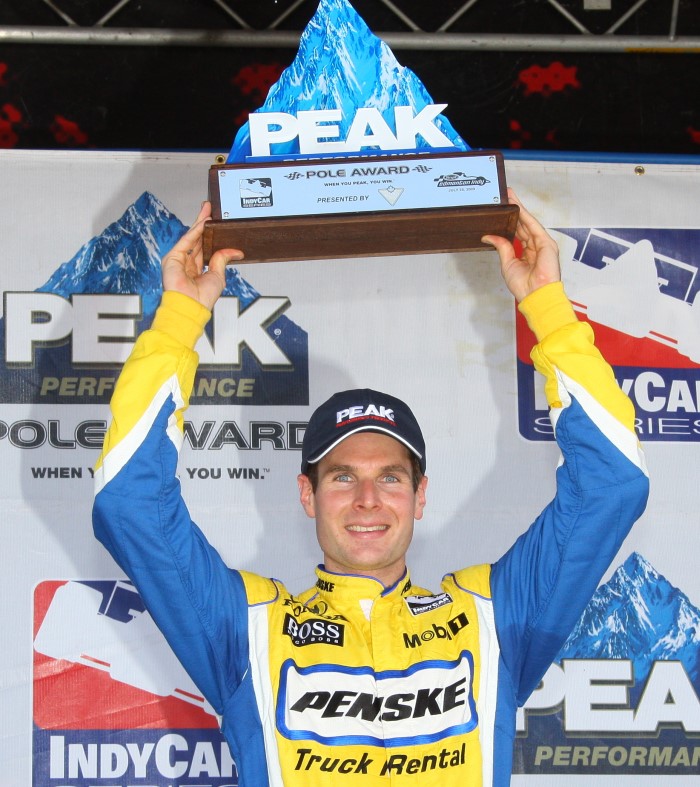 Will Power earned the second PEAK Performance Pole Award of the season by posting the quickest lap in the Firestone Fast Six qualifying session for the Rexall Edmonton Indy.

Power, driving the No. 12 Penske Truck Rental car, lapped the 1.973-mile, 14-turn Edmonton City Centre Airport circuit in 1 minute, 1.0133 seconds (116.414 mph) – the quickest lap of the weekend – in the final minute of the 10-minute shootout that sets the first three rows on road/street courses.

"This qualifying format is exhausting," said Power. "It's almost like a race, with strategy, timing and some really hard driving through all three segments. My guys are fantastic. They may not be here every weekend [Power runs a partial schedule] but they're 'Penske material' — and that's as good as you get."

Justin Wilson, driving the No. 18 Z-Line Designs car for Dale Coyne Racing, missed advancing to the Firestone Fast Six for the first time in five road/street course events this season. Franchitti is the only driver to participate in all shootout sessions.

WILL POWER (No. 12 Penske Truck Rental, PEAK Performance Pole Award winner): "It's very tough qualifying here. I'm physically exhausted. To do that lap, I'm very tired by the end of it, but it was a very good result. I'm very happy to have a 1-2-3 qualifying result for Penske Racing. It just shows what a good team I'm with. None of us have really had to make too many changes this weekend. The cars have been spot on." (About starting on the pole): "The starting position gives you an advantage, but you've really got to use it. As you can see in these races, anything can happen. I just hope to have a clean race tomorrow in the Penske Truck Rental car. I'd love to win one before the next few races that I get to compete in. Tomorrow would be nice."

RYAN BRISCOE (No. 6 Team Penske, qualified second): "I feel pretty good. I would have liked the pole but the important thing is we're at the front and the Team Penske car is very fast. It's really handling well around this Edmonton track so it really makes us feel good going into the race tomorrow. It is a little bit frustrating because we didn't get everything out of the new tires that we could have. I felt like there was a little bit more to lose than to gain by hanging it out too much, but it's still awesome. I've gone on to finish first when starting in second place before so hopefully we can make that happen tomorrow."

HELIO CASTRONEVES (No. 3 Team Penske, qualified third): "It was fun. For a moment I forgot how fun it was to fight for the pole position but, let me tell you, Team Penske is awesome. They did a great job putting three cars in the top positions. That's what happens when you have three guys that step on the gas, you get excitement and it makes you push as hard as you can. I'm happy and we will be ready for a strong race on Sunday."

SCOTT DIXON (No. 9 Target Chip Ganassi Racing, qualified fourth): "My afternoon wasn't too bad. It's a difficult circuit that I think our team struggles at a bit for pure, flat-out speed. We were back and forth throughout the weekend and in and out of the top six positions, so it's been tough. Qualifying, especially in the first group was pretty tough for me. As qualifying went on, especially for the last run I didn't think that we could even get close to the top but we did on our second set of reds (Firestone tires) so that was pretty nice."

GRAHAM RAHAL: (No. 02 McDonald's Racing Team, qualified fifth): "We started the third round on the old reds (alternate tires) and we probably could have gone a little bit quicker but we wouldn't have done a 1:01.2. We decided early on that if we weren't going to get enough out of it we were going to come in early and put on a set of blacks (primary tires) but it felt like the left rear was loose when we did which wasn't the case but that's how it felt. It was so loose in the right handers that it felt like something was broken so we pitted and didn't really make our second run in the final round of qualifying. Fortunately we're in the top-six again which feels really good for the McDonald's boys. The best thing is that at the end of last year we sat down and had a talk at the shop and we said 'If we don't make the top-six at least three times next year we're going to be disappointed' and we've been in it every single time but once and we narrowly missed it and started seventh. So we've got to be pretty pleased with that."

MARIO MORAES (No. 5 1800 Tequilla/Votorantim/KVRT, qualified seventh): "The KV Racing Technology car was really good, but unfortunately I made a mistake on my fastest lap, which cost me a place in the Firestone Fast Six. I feel very bad for the KVRT crew and engineers. They put in a lot of hard work to give me a good car, and I hope tomorrow I can have a good race and give them something back."

RAPHAEL MATOS (No. 2 US Marines Luczo Dragon Racing, qualified eighth): "Qualifying eighth was OK, but honestly I expected to make the top six so I'm a little disappointed. I had to lift on one of my quick laps because I caught up to traffic, but we'll have a good car for the race. It's a long race and a very physical day. The drivers have to be physically prepared, and I feel good there. Now we'll sit down and go through data and get the car ready for tomorrow. I'm looking forward to the race."

PAUL TRACY (No. 15 Edmonton Honda Dealers/woundedwarriors.ca, qualified ninth): "I was happy with the Edmonton Honda Dealers /Wounded Warriors.ca/KV Racing Technology car. I ran my fastest lap in the first round, but unfortunately the track changed a little bit between the sessions, and I developed some oversteer. We didn't change anything on the car, but the track changed on us. It is so tight from sixth to ninth, where I am, that we missed the Firestone Fast Six by just a tenth (of a second), which is a shame. It is super competitive out there, but I know I have a great race car for tomorrow."

ROBERT DOORNBOS, No. 06 Newman/Haas/Lanigan Racing, qualified 10th): "We worked hard today towards qualifying. I think we proved in the first round that the pace is there and ended up P2 in that one. We made some changes in between rounds which didn't seem to work when we went back out so we tried to go back on them but we couldn't seem to find the balance anymore. It is obviously disappointing but it will be a long race."