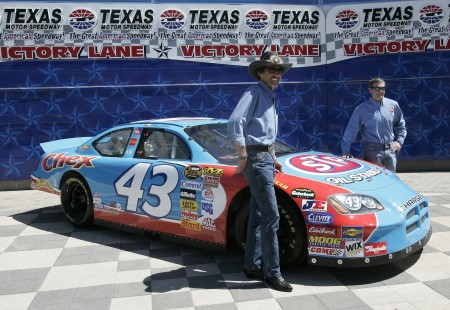 UPDATE #2 This weekend, Bobby Labonte and the #43 STP Dodge team head to the 2.66-mile Talladega ( Ala. ) Superspeedway for Sunday's Aaron's 499. The #43 Dodge will carry a retro STP paint scheme designed to pay tribute to one of the longest sponsorships in history of motorsports. It will be the first time in six years that STP has been the primary sponsor. They will commemorate the event by donating $43 for each lap completed to the Victory Junction Gang Camp.

Labonte will be making his 27th start at Talladega this weekend. He has six top-five and 10 top-10 finishes at the superspeedway. He won this race in 1998. In his last race at the track Labonte started sixth and finished 11th. Petty Enterprises

One of the most famous car designs in all of NASCAR history was the #43 STP design driven to victory lane all over the country by Richard Petty. It appears the STP name will once again grace a Petty-owned car as a primary sponsor, this time with another NASCAR champion at the wheel, Bobby Labonte. CircleTrackPlus Photo courtesy CIA Stock Photo