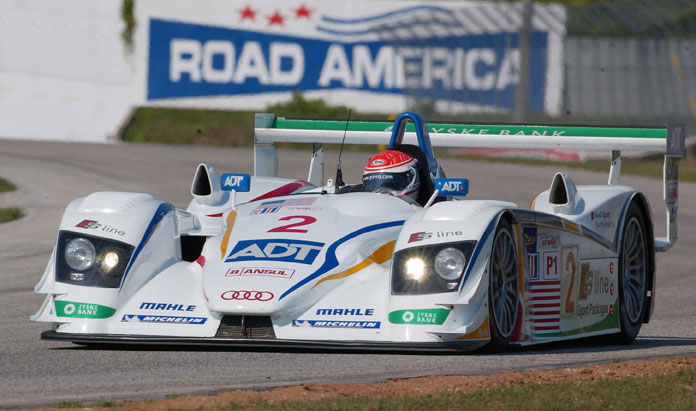 UPDATE #3 Sources are now telling us that it is quite possible the Champion crew was working with the Joest crew on the R10 at the recent Sebring test to learn about the car because the Champion team will soon take delivery of an R10, perhaps in time to race it at the 12 Hours of Sebring.

What we have heard is that there will be two R10's at Sebring, after which Audi will return to Europe and focus on getting the R10 ready for the 24 Hours of LeMans. There will be one R8 campaigned at Houston and Mid-Ohio, but it is unclear to us whose name will be on it. The R10 effort is supposed to return after the 24 Hours, hopefully in time for Lime Rock. We're not sure if the R8 will continue after the R10 returns, or if it simply to keep Audi in the Championship while the R10 is away.

Further research tells us that Audi has refused support of the R8 so that they can ensure that no R8 (pictured right) will beat the new R10. So basically, they told Champion they cannot have an R10, and they are not allowed to run an R8 either. So it is our assumption that Audi effectively made that decision to lock Champion out of the game altogether, at least until later in the year. We hear Dave Maraj is not the least bit happy and is considering his options.

This is what happens when manufacturers are allowed to call the shots, they can eventually destroy a racing series. Grand-Am, controlled by the France family, has the right idea, i.e. they call ALL the shots, and the fields this year are flush with Prototypes and sponsored teams.

It is stuff like this that drives teams away. Much like the case with the Corvette that was sold by Pratt & Miller to Pacific Coast. It was not the same car they were running when they had it, and they certainly were not going to make it possible that the car could beat the newer bigger Pratt & Miller Corvette factory effort. Where is Pacific Coast now? In Grand-Am. We rest our case.

02/01/06 We are hearing now that the team isn't in trouble, just that they wanted to have an Audi R10 (pictured right) for Sebring and were told no and are not happy after winning the LeMans 24 Hour and the ALMS championship for Audi last year. The guy that owns Champion, Dave Maraj, also owns Champion Porsche and Champion Audi the BIGGEST Porsche and Audi dealers in the world.

Will he stay with Audi, or switch to Porsche, which has Penske? We hear he is also looking at other possibilities.

02/01/06 Rumor has it that the defending ALMS Champion Audi team is in trouble and will miss the biggest ALMS race of the year, the 12 Hours of Sebring. They were not at the recent test and there has not been a peep out of ALMS about its marque team. We are investigating.