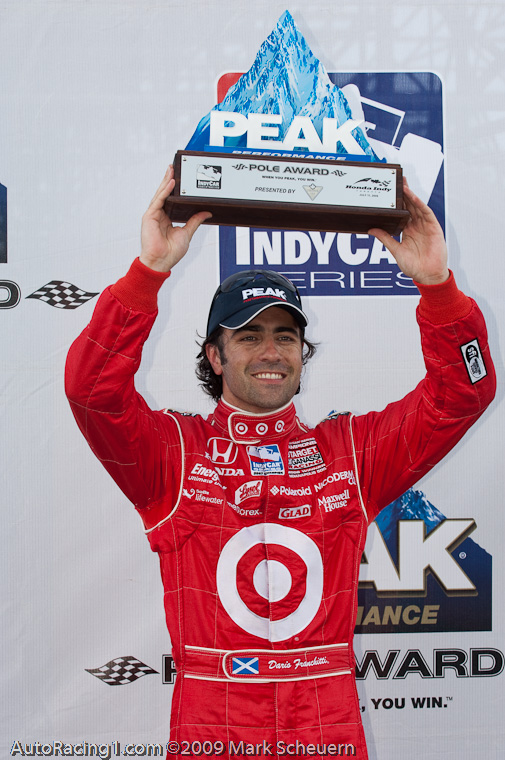 1999 Indy 500 winner Dario Franchitti has won the pole for the 23rd running of the Honda Grand Prix of Toronto. Franchitti's lap of 1m01.0249s in his Target Chip Ganassi entry was enough to beat Penske Trucking driver Will Power.

Franchitti, who started on the pole on the streets of Toronto as a rookie in 1997, posted a quick lap on the 1.755-mile, 11-turn circuit to top the Firestone Fast Six session for the 85-lap race July 12.

"I got my first pole here in 1997 and I tried to remember how I did it then," said Franchitti. "After my quick lap in the Fast 6 I pulled it in and said that's it, that is as fast I could go. That is the best lap I have driven around here."

Al the drivers were happy today's qualifying was run in the dry.

"We always knew we would get qualifying in today," said Franchitti. "Whether it was wet or dry was the question. I think we all proved that it's pretty treacherous out there in the wet today. I managed to do a 360 in the last corner. I was entertaining the fans, yes (laughter). It's really treacherous in the wet. I was hoping it was going to dry up."

Will Power, making his first IndyCar Series start since the Indianapolis 500, also will be on the front row in the No. 12 Penske Truck Leasing car for Penske Racing. Graham Rahal and Justin Wilson, the winner six days earlier at Watkins Glen International, will share Row 2.

Starting fourth will be Justin Wilson, the race winner last week in Watkins Glen. His fourth start here in Toronto. He has a win and a previous pole.

"I thought it was a reasonable day," said Wilson. "Things went quite well. But we weren't just quite quick enough. We started out quite loose, struggling to get the power down, struggling for grip. We kept working on it, kept making improvements. Quite pleased with what we managed to do on the used reds. Unfortunately it wasn't enough to beat Dario. He was on good form as well as Graham and Will. I'm pretty pleased with fourth. Hopefully we'll have a trouble-free race and we'll move forward."

Canadian Alex Tagliani, was fastest in Q2 qualifying but could not duplicate the lap in Q3 and ended up 5th on the grid.

"We lost the balance between Q2 and Q3," said Tagliani, "For a small but talented team like ours, to be ahead of drivers from teams like Penske and Ganassi, it means a lot to us. It’s a good reward for everyone on the team and they truly deserve it because they do such a fantastic job. It’s also very special to have a good performance like this at a home race in front of my fellow Canadians. It’s also nice to be able to offer our sponsors the Rexall Edmonton Indy and Northlands, the King Tut Exhibit, Sears, Craftsman and The Keg a good qualifying result and I’m confident we can follow this up with another strong performance tomorrow."

“The Azul – Votorantim – KV Racing Technology team had a disappointing qualifying session," Mario Moraes said. “It was unusual to have our fastest lap on the black tires instead of the red. The team will work on the car tonight and with a good race strategy tomorrow, I am confident I can have a good race.

His teammate, and hometown favorite Paul Tracy said, “I am super disappointed. We just missed advancing by a hundredth of a second. The times are so tight from fifth to eighth and I just couldn’t get any more out of the Ontario Honda Dealers – Wounded Warriors.ca car. We had a very good car the first practice yesterday when the track was slippery and a good car on the wet track this morning. I am very frustrated. As far as the race tomorrow… it is going to be tough, but it is a street circuit and anything can happen. I have to get the car through Turn #1 at the start and not get collected in a crash. Then just settle into a pace, work our race strategy, save fuel and the tires and see what happens."

Sunday's race starts at 1:00 PM and will be broadcast live on ABC back in the USA.

DARIO FRANCHITTI (No. 10 Target Chip Ganassi Racing, PEAK Performance Pole Award winner): "I think I got my first pole here in '97, which is an awful long time ago. So that was '97. I was trying to remember what I did right back in '97 this morning so I could kind of put it to practice with the Target car. Usual story. The guys worked really, really hard to improve the car yesterday. Then with the rain this morning, we didn't do too much running. And it was good actually with the changes we made in qualifying. The car was good out of the box. The lap that I did in the Fast Six, I came in afterwards and said basically, 'That's it. That was a hell of a lap. That was as good of a lap as I've driven around here. If they can go quicker, let them have it, because that's all she's got.' I was very happy with the car and the job I did today."

WILL POWER (No. 12 Penske Truck Rentals, qualified second): "My crew just walked in this weekend; the first time they've been back since May and same with me. They did a fantastic job. We're really happy to be second. We would have been a lot happier with first, but second is great. The car has been good since we rolled it off the trailer and the same at Long Beach. I'm just doing my job."

GRAHAM RAHAL (No. 02 McDonald's Racing Team, qualified third): "At the end of the day, the McDonald's car ran extremely well and we made great improvements and it shows what this team can do. We're happy to be third today."

JUSTIN WILSON (No. 18 Z-Line Designs, qualified fourth): "I thought it was a reasonable day. Things went quite well. But we weren't just quite quick enough. We started out quite loose, struggling to get the power down, struggling for grip. We kept working on it, kept making improvements. Quite pleased with what we managed to do on the used reds. Unfortunately it wasn't enough to beat Dario (Franchitti). He was on good form as well as Graham (Rahal) and Will (Power). I'm pretty pleased with fourth. Hopefully we'll have a trouble-free race and we'll move forward."

ALEX TAGLIANI (No. 34 King Tut/Conquest Racing, qualified fifth): "It was a great job for the Conquest Racing team. All of the boys did a fantastic job. We didn't run as much as we wanted to yesterday. I think we left a couple things on the table by not running a new set of tires on Friday. I think the car was decent. We missed a couple of attempts at the end to improve our lap and be in the top three but it was a great effort from all of the boys."

RAPHAEL MATOS (No. 2 US Marines Luczo Dragon Racing, qualified ninth): "I'm a little bit frustrated that we didn't make it into the fastest six. We had a car that could fight for a top five, but I just made a mistake and hit the wall in turn 11. It bent the right toe link and we couldn't go back out. It just means we have to work harder for tomorrow's race."

HELIO CASTRONEVES (No. 3 Team Penske, qualified 10th): "I have to say, what an incredible crowd. It's great to be back here in Toronto. In qualifying, unfortunately, I got caught in a lot of traffic. I lost about three laps there because of traffic in front of me. This is a tough street circuit. We have some different drivers and teams in the Fast Six, so it should be interesting tomorrow in the race. Team Penske will be ready and we will go for it on Sunday."

RYAN BRISCOE (No. 6 Team Penske, qualified 11th): "It's tough out there. I just had a difficult time finding the balance on the Team Penske car. It was tough to get the tires to come in, and I just couldn't get enough grip. We're starting further back than we'd like but we'll just have to work a bit harder in the race tomorrow and work our way through the field."