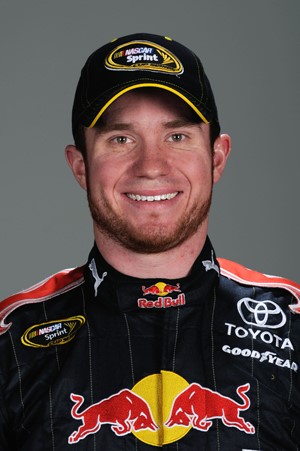 With rumors the team may switch to Chevy next year, and needing to give Toyota some good PR, Brian Vickers led a Team Red Bull Racing sweep of the front row when he took the pole for Saturday night's NASCAR Sprint Cup Series LifeLock.com 400 at Chicagoland Speedway with a lap of 184.162 mph (according to the NASCAR T&S display) with his teammate Scott Speed outside the front row.

Vickers captured his fifth pole of the 2009 season and 10th of his Sprint Cup career with the run Thursday night around the 1.5-mile Chicagoland Speedway.

"It was an amazing lap, I didn’t expect it to be that quick," Vickers said. "I knew that we had a really good car and it was just up to me to mess up or finish the job. The Red Bull guys back at the shop did a tremendous job building and putting together a great car right out of the gate. From the time we unloaded, we were really good."

Speed, the final car out during the session and who had to qualify on time, did so in impressive fashion with a lap of 182.958 mph.

“Both of our cars obviously ran well…going into qualifying, I knew we had a chance for a top-five qualifying spot, but you also have to be cognizant of making the race," Speed said.

BRIAN VICKERS, No. 83 Red Bull Toyota Camry, Red Bull Racing Team Starting Position: 1st
How was your qualifying lap?
"It was an amazing lap, I didn't expect it to be that quick. I knew that we had a really good car and it was just up to me to mess up or finish the job. The Red Bull guys back at the shop did a tremendous job building and putting together a great car right out of the gate. From the time we unloaded, we were really good."

How were you able to get your car to hold that well for your lap?
"We started out with a really good car this morning. Ryan (Pemberton, crew chief) and all the guys at Red Bull, I think we unloaded a great package but we were lacking a component and that was drive off. We almost went one direction and that red flag that lasted so long — Ryan (Pemberton) got in the truck with engineers and really worked some stuff out on the simulator. So, we decided to go a different direction to help the drive off and man they nailed it. From that moment forward I knew we had a great car and a great drive off which is about the only component we were lacking when we unloaded. Everybody has done their part and maintained it since."

Are you getting frustrated with winning so many poles but not getting to victory lane?
"Absolutely, I'm very frustrated to not be in victory lane. Obviously, sitting on a pole this year, or poles , was one of our goals — winning races was the other. If I had to pick between the two, I'd pick wins over poles but we'll take whatever we can get and we're really proud of the poles that we've sat on this year. We've had the cars during the race to win, we just haven't had
all the pieces come together. I think everyone knows to win a NASCAR Sprint Cup race is very difficult, it takes a lot of talent, almost zero mistakes through 400, 500 or 600 miles, and also some luck. There have been races this year that we've lost with a car to win due to our own merit and our own mistakes, whether it be on pit road, the driver or engine-related. Most of them we've lost due to someone else's mistakes or bad luck. We had a car to win at Charlotte and a couple guys gambled that didn't run well all day, they stayed out, the rain came and they won. It's not much you can do about that. We've made the best decisions we could with the knowledge we had at the time and we ended up fifth."

Are you glad to see your teammate starting alongside you on the front row?
"I'm really proud of the efforts by the entire Red Bull Racing Team. I knew that (Scott Speed) draw — going out last with the sun going down — the time qualifying was going to be that was going to help tremendously. We knew they had a good car in practice. They made some changes throughout practice that seemed to really help them and they seemed fast. Given those two factors, Scott (Speed) tends to — if he does have a strength it's qualifying and that's where you see it most. Knowing that he's going out last on a really fast race track — to be honest we were concerned because we knew he was going to be quick. We wanted him to do well, just not better than us."

How was your qualifying lap?
"Both of our cars obviously ran well since we unloaded, so going into qualifying I knew we had a shot certainly for a top -five spot. But, you also have to be a little cognizant of making the race. Honestly, after the lap Brian (Vickers) threw up there it was really no point to try to push it to the absolute edge. It was a solid lap. The car has been great all weekend. It's honestly easier to drive the car on the front row than it is sometimes than when you qualify 30th."

How do you balance going for the pole knowing you have to get into the race?
"If Brian (Vickers) would have posted a .60 or .70, I think we would have tried to push it a little bit harder. After that lap there's no need to try to get the pole, you just want to make the race. It's always in the back of your mind but sometimes those laps that you take a little easier are a little faster anyways. It's probably not that big of a deal."

Did you make any race runs in practice?
"Towards the end we made a solid eight lap run and it was really competitive. If we do happen to get rained out tomorrow and we have to start the race with what we ended practice with I feel pretty reasonably confident that we'll be alright."