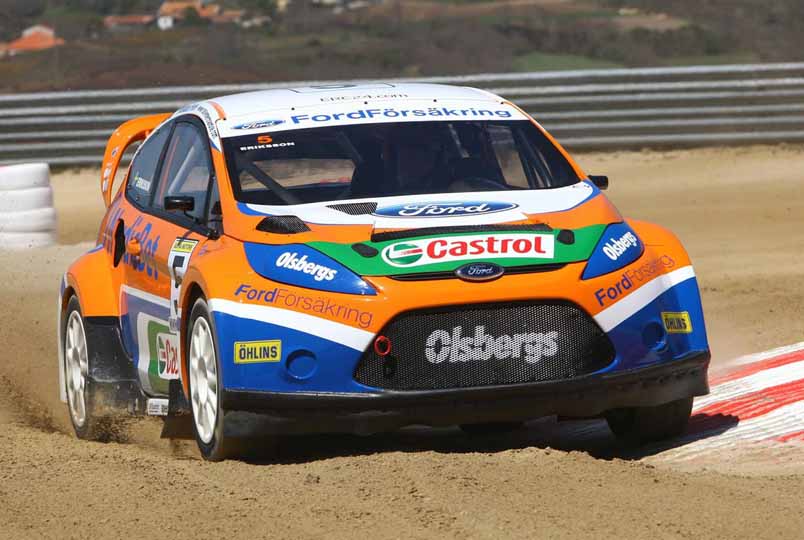 On July 19, two high-performance motorsport versions of the new 2009 Ford Fiesta will make their North American motorsports debut at the annual Pikes Peak International Hill Climb outside Colorado Springs, Colorado. Driving the Olsbergs Motor Sport Evolution Fiestas will be four time Swedish Rally Champion Andreas Eriksson and World Rally and Ford Racing legend Marcus GrÃ¶nholm. Together they will attempt to be the first team to break the 10-minute mark over the 12.4-mile, 156-turn pavement and gravel course.

Andreas Eriksson—driver/manager Olsbergs Motor Sport Evolution—YOU HAVE SAID IN THE PAST THAT PIKES PEAK IS AN EVENT YOU HAD ALWAYS WANTED TO RUN. “I remember watching it when I was little when Audi and Porsche were there. It’s something I’ve always wanted to do because it is a legendary race and I was told when I was little that’s where I should go when I got older. Another thing that interests me is that it is such a unique event in that you only get one shot for success. That’s why more or less."

DOES PIKES PEAK PRESENT CHALLENGES TO YOU AS A DRIVER THAT YOU WOULDN’T SEE ELSEWHERE? “Yes, the high altitude. I’ve never raced in this type of altitude before – maybe 2,000 meters (6500 ft) is the highest. This is really high, over 4,000 meters (finish line is at 14,110 ft). It will be really different."

PIKES PEAK WITH CHANGING WEATHER, PAVEMENT AND ALTITUDE CAN MAKE SETING UP THE CAR A CHALLENGE. HOW DO YOU FIND A HAPPY MEDIUM AS A DRIVER? “I’m used to pavement challenges because in the Rallycross we race on different pavements. Rally could be more asphalt in one race, more gravel in another race, or have tarmac in another. In some Rally courses it’s fifty-fifty, so I’m quite used to that. I’m not worried about that because I’m used to going from gravel, tarmac, asphalt and back to gravel."

YOU HAD THE OPPORTUNITY TO TEST THE FIESTA IN PIKES PEAK SETUP. WHAT WERE YOUR THOUGHTS AFTER TESTING? “With the tight time frame of shipping the cars to the United States we couldn’t test as much as we wanted to. The Fiesta is well balanced. The thing is, it goes really fast when you get the power up in it. It will be a challenge to drive it, but it’s easy to drive, easy to steer and easy to handle. It’s going to be one of the best handling cars up the mountain. I know Marcus is a little concerned about the torque, but we tried to fix it up. Imagine if you had 800 horsepower, it becomes clear that the torque you have is a problem. It pumps a little slower, but it will get better. But the drive will be something I will never ever forget."

FROM WHAT YOU HAVE SEEN AND KNOW ABOUT THE COURSE WHAT WORLD RALLY CHAMPIOSHIP STAGE WOULD YOU COMPARE IT TO? —“If you look at the roads in New Zealand, they’re smooth, I’ve never driven on them, but Marcus has. It’s more like that on the gravel part, it’s quite wide. In the beginning it’s quite smooth with the tarmac. Then it starts to hairpin, and then it goes smooth again."

Marcus GrÃ¶nholm—double World Rally Champion driver, Olsbergs Motor Sport—HAVE YOU ALWAYS WANTED TO PARTICIPATE IN THE PIKES PEAK INTERNATIONAL HILL CLIMB? “I have been following the event for many years and I had seen the video from the race in 1986, I think. Then the opportunity came because Andreas asked me if I would do it, and I immediately said, ‘Yes, I would like to try.’"

ANDREAS MENTIONED THE HIGH ALTITUDE AS A CHALLENGE. WHAT OTHER SPECIAL CHALLENGES ARE ATTACHED WITH THIS EVENT? “I think it’s altitude, and to get the car working up to the top, that’s the big thing. There will be a bit of learning for us as well because we don’t know that much about Pikes Peak and the car is completely new. So we will see. I hope it will be a good challenge."

WHAT ARE YOUR THOUGHTS AFTER TESTING THE FIESTA? “We have tested it, but not really at the high altitude and not uphill on the track. The power of the car is good and it feels really easy to handle. I would have liked to test it a little bit more, but, like always, we are running against time, so it was in the last minute and the car had to be sent to the U.S."

HOW DOES THE FIESTA DRIVE COMPARED TO A WRC CAR? “There’s much more power in this car, and that’s always nice. It’s nice to handle, but a little bit lacking in torque like the WRC cars have. They are quite easy on the torque but of course we have so much power, so it’s difficult to get it, to drive from the bottom, but otherwise it’s easy."

HAVE YOU EVER ACTUALLY BEEN UP PIKES PEAK? “No, never. It will be my first time."

WHAT DO YOU KNOW ABOUT THE COURSE? “Well, from Andreas I heard the road is really nice, wide and smooth. I’m really looking forward to making the trip to the States and to take good notes, then we can try it with a race car.

FROM WHAT YOU KNOW ABOUT PIKES PEAK, WHAT WRC STAGE WOULD YOU COMPARE IT TO? “It’s really difficult to say, but I think it’s like New Zealand with the fast, nice, smooth wide roads. It hairpins a lot. I’m really looking forward to seeing the road."