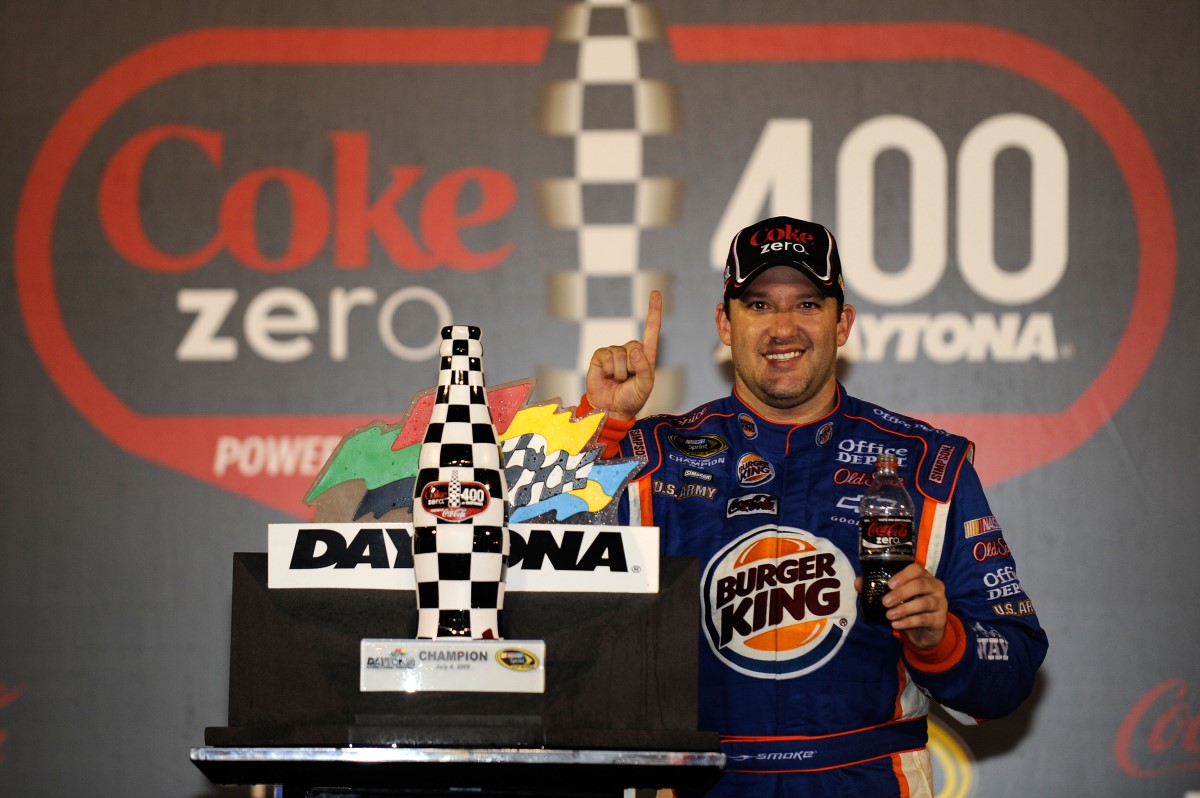 The victory was Stewart’s second of the season, his second as an owner/driver for Stewart-Haas Racing and the 35th of his NASCAR Sprint Cup Series career.

With a push from teammate Denny Hamlin, Busch had taken the lead approaching the white flag and held it through Turn 4 of the final lap. But Stewart drove his No. 14 Chevrolet to the left rear of Busch’s No. 18 Toyota off the corner, forcing Busch to go to the bottom of the track to maintain control of his car.

Stewart then moved high, and as Busch slid back up to block, contact with Stewart’s car turned Busch into the wall and ignited a dramatic multicar wreck near the finish line.

Jimmie Johnson followed Stewart to the stripe, with Hamlin in third, Carl Edwards in fourth and Kurt Busch in fifth.

Were it not for trouble to most of the Chase for the NASCAR Sprint Cup “bubble" drivers, Mark Martin’s postseason aspirations might have suffered a significant setback, thanks to a wreck on Lap 13 that relegated him to a 38th-place finish.

As Martin exited Turn 2, Matt Kenseth gained momentum to the outside, and Martin’s Chevy wasn’t clear of Kenseth’s Ford when Martin moved up the track. Martin’s car spun into the infield and sustained serious damage.

“Matt ran the top side there and got a run up off the corner, and I was just trying to keep it down and leave us room, and I just pinched him," Martin said. “Front wheels were cut, and it just didn’t turn quite enough. My fault."

Martin’s wreck was nothing, however, compared with the 13-car pileup on Lap 77 that eliminated Dale Earnhardt Jr.

Contact between the Dodges of Kasey Kahne and David Stremme triggered the wreck, but the cars of Earnhardt and David Reutimann perhaps were the most severely damaged, as Reutimann slid up the track into Earnhardt’s path.

Reutimann entered the race 14th in points, 12 points out of 12th, the final position eligible for the Chase for the NASCAR Sprint Cup. He finished 33rd and lost ground.

“A couple of guys got together, and I just tried to stay high, and the No. 00 (Reutimann) was crossed up, and we got together with him pretty hard and tore the upper A-frame off the chassis," said Earnhardt, who finished 39th.

Jeff Gordon was another victim of the Lap 77 wreck but was able to continue. Though his car was damaged too severely to contend for the win, Gordon stayed on the lead lap and finished 28th.