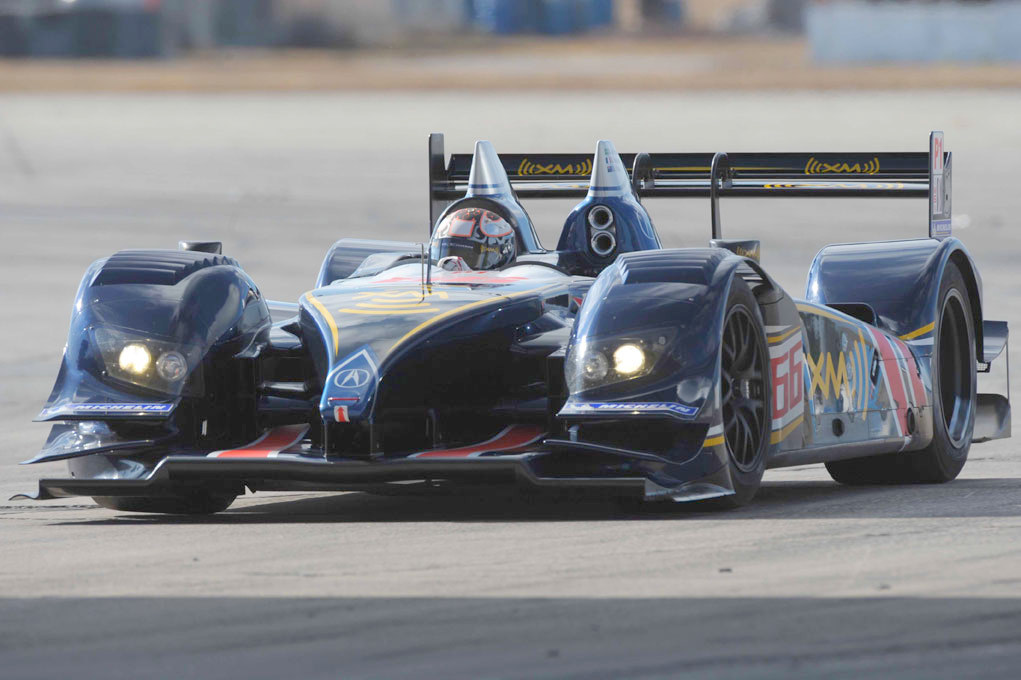 Scott Dixon turned in the fastest time on the final day of the American Le Mans Series’ annual Winter Test on Wednesday. The reigning Indy 500 and IndyCar champion turned a lap of 1:45.671 (126.052 mph) in the morning session at Sebring International Raceway.

The new Acura ARX-02a LMP1 entry that Dixon drove Wednesday morning was fastest in all but one of the eight sessions throughout the week. Teammate Simon Pagenaud has the week’s quickest time, a 1:44.814 (127.082 mph) from Tuesday morning. His time bettered Marco Werner’s standing qualifying record around the famed 17-turn, 3.7-mile layout, set in 2007 in an Audi R10 TDI. Pagenaud, Dixon and team owner Gil de Ferran will team for the season-opening Mobil 1 Twelve Hours of Sebring presented by Fresh from Florida on March 21.

Dario Franchitti was second in PatrÂ¢n Highcroft Racing’s Acura P1 with a fast lap of 1:46.367 (125.227 mph). He set his time in the day’s final session and will drive in the 12 Hours with David Brabham and Scott Sharp.

This week was the first time Dixon and Franchitti drove the new Acura.

“It’s much harder (than driving the previous Acura P2 car)," Franchitti said. “The weight and the size of the tires make it more physical. We still have a long way to go and some things to work on. But when the car is fully sorted out it will be unbelievable."

Two more sessions are scheduled for Wednesday afternoon. The Series will be back at Sebring in less than two months for the season-opening 57th Mobil 1 Twelve Hours of Sebring presented by Fresh from Florida, the 100th race in Series history.

Adrian Fernandez was second in LMP2 on Wednesday in Lowe’s Fernandez Racing’s Acura ARX-01b. He set his lap of 1:49.008 (122.193 mph) during the second session in the car that he is sharing with Luis Diaz and Michel Jourdain Jr.

Richard Lietz went fastest in GT2 for Farnbacher Loles Racing and its new 2009-spec Porsche 911 GT3 RSR. A Porsche factory driver, Lietz set a time of 2:02.960 (108.328 mph) in the car that he is driving with full-season partners Dirk Werner and Wolf Henzler.

It was an impressive debut on and off the track this week for the all-new Acura ARX-02a prototype sports cars in pre-season testing for the 10-race 2009 American Le Mans Series.

The anticipated launch of Acura’s latest racing vehicle saw a large crowd of media and ALMS associates in attendance Monday night for the debut of the two Acura ARX-02a machines from de Ferran Motorsports and PatrÂ¢n Highcroft Racing at the Sheraton Four Points ballroom, next to the legendary Sebring International Raceway.

The presentation by Honda Performance Development (HPD) and Wirth Research officials left many onlookers open-mouthed by the elaborate design and detail of the two ALMS LMP1 class newcomers. The ARX-02a cars are Acura’s first entries into the LMP1 division, after two successful years in LMP2.

In addition, the HPD and Wirth officials removed the front and rear bodywork from the new cars for a close-up view of the suspension and 4-liter, normally-aspirated V-8 engine. This type of access is almost unheard of in world sports-car competition.

After the media unveiling, the two Acura prototypes set sail on the fast but tough 3.7-mile, 17-turn Sebring road circuit, and the cars didn’t disappoint on the difficult tarmac.

Young French star Simon Pagenaud wheeled the No. 66 XM Radio de Ferran Acura ARX-02a machine under the official track pole record Tuesday with a clocking of one minute, 44.814 seconds and an average speed of 127.082 miles per hour, bettering the old mark set by Audi’s Marco Werner in 2007 at 126.889 m.p.h.

The initial sessions continue to evaluate the new Acura in a variety of testing activities, including chassis and engine readings and improvements.

David Brabham, the only ALMS driver to win races in all four classes, drove the No. 9 PatrÂ¢n Highcroft Acura ARX-02a to a speed of 125.475 in testing, while Adrian Fernandez was best in the LMP2 division at 125.023 in the Lowe’s Acura ARX-01b.

All three Acura cars will be entered in the 57th annual Mobil 1 12 Hours of Sebring, set for Saturday, March 21.

DAVID BRABHAM (#9 PatrÂ¢n Highcroft Racing Acura ARX-02a): “This stage of the testing program is all about getting miles on the car. It is a brand new car and it is extremely sophisticated and we obviously need to learn as much as possible. To do that, you basically need to do lots of laps, which we were able to achieve. That was extremely encouraging and every time we run we learn more about the car and gather more data."

SCOTT SHARP (#9 PatrÂ¢n Highcroft Racing Acura ARX-02a): “It was a productive session for PatrÂ¢n Highcroft Racing with the new Acura. We were able to do a lot of laps and we were able to make several significant changes to the car and really fine-tune the set-up. It is all part of developing a brand new race car. Everyone on the team is building confidence with this new, exciting Acura machine."

DARIO FRANCHITTI (#9 PatrÂ¢n Highcroft Racing Acura ARX-02a): "It was a great opportunity to get the feel of the LMP1 Acura because it is different from any other car that I have ever driven.
The potential is certainly there. Between all the guys at PatrÂ¢n Highcroft Racing and HPD, they will certainly work it out. The big challenge is that Sebring is the toughest race of the year and it is the first race on the schedule."

SIMON PAGENAUD (#66 XM Radio de Ferran Acura ARX-02a): “This car is very physical for the driver. It produces a lot of Gs in the corners, as the cornering speeds are tremendous. It is a very interesting car to drive. The Sebring track is old and bumpy and you feel every bump. But this car has great potential and I’m very happy with the development of the new Acura. It will be a great race at the 12 Hours of Sebring."

GIL de FERRAN (#66 XM Radio de Ferran Acura ARX-02a): “This is very early days for this new Acura. We were able to get a good amount of miles on the car. I’m pleased with that. It is such a unique design and the concept is revolutionary. I am very delighted that Acura and Wirth [Research] went with this concept. It has great potential and showed a little of that this week. But we still have room for improvement and reliability. So, we’ll get some more testing before the 12 Hours."

SCOTT DIXON (#66 XM Radio de Ferran Acura ARX-02a): “The new Acura is a very unique car. It has one of the most sophisticated designs of any sports car I have seen. It was great fun to drive the car this week. I am looking forward to coming back to Sebring for the race. It should be very exciting to race on this famed track for the first time. I have tested here on the short track with the Indy Car, but racing against the Audi and Peugeot will be a great experience."

ADRIAN FERNANDEZ (#15 Lowe’s Fernandez Acura ARX-01b): “We feel pretty positive about our season and the performance of the Lowe’s Acura Car. It’s a car that has been well-developed. The LMP2 rules have changed and the car is heavier this year. We’ll see how the Sebring race goes this year. We have been very competitive the past two years at Sebring and I believe we can be right in the hunt in this year’s race. We have a strong car, engine and driver lineup."

LUIS DIAZ (#15 Lowe’s Fernandez Acura ARX-01b): “The test has been very positive. I am anticipating a lot of very tough competition this year from the new Mazdas. The Sebring race will be very tough on the crew, drivers and equipment. But I feel we are prepared for another big effort, but not overconfident."

MICHEL JOURDAIN JR. (#15 Lowe’s Fernandez Acura ARX-01b): “I have driven a lot at Sebring, but on the short course with the CART cars. The big track is quite difficult, especially the last corner and Turn One. Adrian and Luis are doing a good job at setting up the car. It is a race that I have always wanted to do." friends."