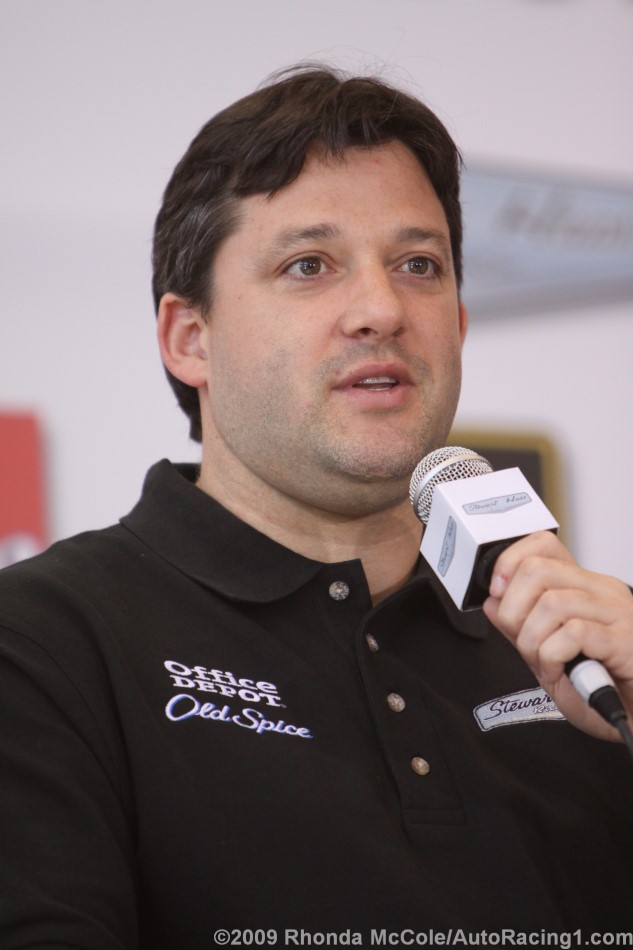 “I'm hopeful to compete at a high level. I think we will," said Shelton. “With Armando, Jarit and Chase, they're competitors. I want to win every race, but I know we won't. That's the competiveness in me. When we unload we're going to be prepared to compete with the idea that we have a good chance of winning. That's my desire."

Next up on the schedule was a visit to the Stewart-Haas Racing shop, a new venture headed by two-time Sprint Cup Champion Tony Stewart, who departed Joe Gibbs Racing after 10 years with the team to try his own hand at team ownership.

Having already owned a dirt track, a World of Outlaws team and a USAC team, Stewart said the prospect of owning a Sprint Cup team hasn’t really fazed him.

“As scary as it probably should be, it hasn't been," said Stewart. “I've been really comfortable with everything that we've done so far and I think a lot of that is the fact that I feel like I have good people around me.

“When you have guys around you that understand your philosophy and understand your mindset going into it and adopt that and go out and make it happen, that takes a lot of that fear away I guess. So when you do go to bed at night, you can relax a little bit."

Joining Stewart in the two-car operation will be defending Daytona 500 winner Ryan Newman, who became a free-agent after a nine year stint at Penske Racing.

“I'd say easily three to four other offers to go to teams. Not all of them made it to paper, but I had more than one of them on paper," said Newman “I felt very blessed to be in that position. Tony and I grew up very similar, in essence of the USAC racing days and the open wheel racing.

“Going back to our past, we've had our moments on the race track. I feel we've only had those moments because we're hard nosed racers both going for the same piece of real estate. We've resurrected all of that, but in the end we're both hard racers. From now on we may beat up each others door, but we're doing it because we're trying to represent our team and our sponsors."

The team also announced a new sponsorship program with Burger King, who will serve as primary sponsor for Stewart’s no. 14 Chevrolet for two races in 2009. Stewart will also be involved in an extensive marketing campaign for the fast-food chain.

Johnson made history in 2008, becoming the first drive since Cale Yarborough to win three consecutive championships, leading many to wonder if Johnson could become the first driver to win four titles in a row.

"I know it's crazy and in theory I thought about it," Johnson said of the possibility of winning a fourth title. “It would be great to win four in row, but there's so much racing between now and then. When we started the season last year we struggled. [We] really had to fight through some things to get our car sorted out.

“I know this team is capable of winning races and a fourth championship. We have to get to the track and get to work and see where we fit. I'm extremely optimistic, but the Chase is so far away."

The current economic climate had been the hot topic of discussion for much of the week, and despite all their success on the track and the recent changes made by NASCAR help teams defer some of the cost of the sport, even a stalwart team like Hendrick Motorsports are feeling the pinch.

"I think NASCAR’s done everything they can do to manage costs," said team owner Rick Hendrick. “They built the box pretty tight. You can't do too much with the cars. They eliminated testing and people are going to go to the other end of the world to test. We've had more time off in January. I think they're very conscious of what is going on in the economy and they're doing everything they can.

“Everything in this economy has been affected. I think NASCAR has done a pretty good job trying to manage costs. There's no piece of the economy that hasn't felt it. We're just going to have to see how it unfolds going through the year.

"I think it’s brought us all back to earth. People don't take the vacations they used to take. You're more conscious of things. When the economy is real good, you spend money, you feel good and you think it's always going to be that way. When you go through one of these recessions you tighten up. There are so many people that haven't been through anything like this, so I think it's going to teach us all a lesson."

HMS will field four fully sponsored teams for 2009, luring veteran Mark Martin out of semi-retirement to drive the no. 5 Chevrolet as he makes one last bid for his first series title.

“I could sit on the couch or I could drive this No. 5 car," said Martin. “There's nothing else in the world I'd rather do than to be behind the wheel of this No. 5 car and doing this. I know that there is nothing else out there that will take the place of racing a great race car and working with a great race team. That time for me is limited and I'm so grateful to have the opportunity to do this at this stage. It's just unbelievable for me to get this chance.

“I was a little apprehensive about driving the full schedule, but I darn sure knew I wanted to drive that No. 5 car. This was what it took to make it work and I'm thrilled. This is what I want to be doing."

"The amount of respect that everybody in the series has for him is really the one thing that sticks out about Mark," said Hendrick teammate Dale Earnhardt, Jr. “Everybody likes Mark and everybody thinks a lot of him. To me he is a role model in that aspect. In that respect he is a role model in that guys should try to achieve and gain that kind of respect from their peers like he has.

“I am glad he is here. He is an awesome race car driver. He's going to be fast
and he's going to be hard to beat, but he's going to bring a lot to the table too. Just like being able to work closely with Jeff [Gordon] and Jimmie [Johnson] last year was exciting, it's going to be exciting to work with Mark on a teammate basis. I am looking forward to that."

Racing legend Mario Andretti was also on hand to present Johnson with the SPEED Driver of the Year Award for the third straight year.