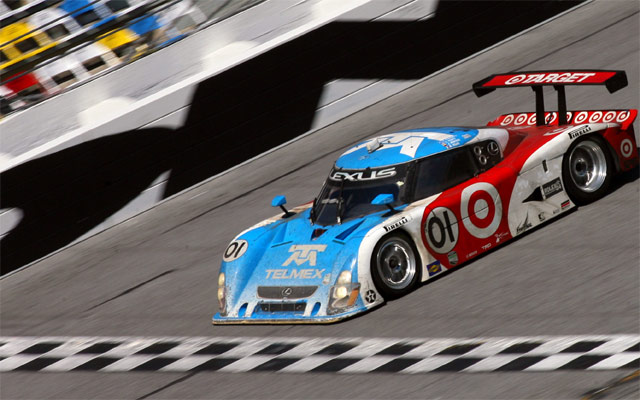 The Daytona 500 and the start of the 2009 NASCAR Sprint Cup Series season is less than three weeks away but a number of drivers and owners will make an early visit to Daytona International Speedway for Saturday’s Rolex 24 at Daytona.

Since 1962, NASCAR stars have been a part of the historic, twice-around-the-clock sports car race. A NASCAR Sprint Cup competitor has shared the winning Grand-Am Daytona Prototype in each of the past three seasons: Casey Mears in 2006 and Juan Pablo Montoya in 2007-08.

Practice and qualifying for the Rolex 24 at Daytona begin Thursday. The race is set for 3:30 p.m. ET Saturday and ends at the same time on Sunday.

Montoya again will share the No. 01 Chip Ganassi Racing with Felix Sabates Lexus Riley with Scott Pruett and Mexico’s Memo Rojas. The team recorded the seventh-fastest speed in the recent “Roar Before the 24" test.

Pruett and Rojas are the 2008 Daytona Prototype champions as well as defending Rolex 24 at Daytona winners.

“I’m excited because the car is pretty quick," said Montoya.

Johnson is part of a four-driver GAINSCO/Bob Stallings Racing team. His partners include Alex Gurney, Jon Fogarty and open-wheel champion Jimmy Vasser. The GAINSCO Auto Insurance Pontiac Riley was runner-up in last year’s 24-hour race as well as the No. 2 finisher in the series championship.

“I’m here to win; that’s what we’re all here for," said Johnson. “I’ve been on the second step twice now. It’s such an accomplishment just to finish this race so to be there in Gatorade Victory Lane and be part of the ceremonies is great.

“But second in anything is first loser. It’s fun but it’s not the most fun."

Johnson, whose team was 10th overall in the recent Daytona test, is happy to be back on track following his record-matching third consecutive NASCAR Sprint Cup Series championship.

“It’s been a few years since I ran the Rolex 24 and I’ve been dying to get back," said Mears, who joins Childress’s NASCAR Sprint Cup team this season. “At the test I got to knock off the rust a little bit and it felt pretty good. This race is so much fun to do and I’m ready to go racing."

Childress is no stranger to the Rolex 24. He co-drove with James Hylton in the 1976 event sharing the No. 48 Chevrolet Laguna that Hylton regularly raced in the NASCAR Sprint Cup Series. “We finished second to David and Larry Pearson," Childress said of the race in which NASCAR stock cars raced in the Grand International class at Daytona and in the Le Mans 24-hour race.

Fellow NASCAR Sprint Cup owner Penske will field a Penske Racing entry for the first time since 1973. Penske finished second in the 1963 Daytona Continental. This year’s Rolex 24 at Daytona marks the 40th anniversary of the team’s 1969 victory in the event with Mark Donohue and Chuck Parsons.

Penske Racing’s No. 16 Porsche Riley is brand new to the Daytona Prototype class. Driven by Timo Bernhard and Romain Dumas, the Porsche-powered entry is expected to challenge for both the 24-hour victory and season title. “We are proud to continue our longstanding relationship with Porsche," said Penske, whose organization has won five championships and counts 35 victories with the German manufacturer since 1972. “We look forward to continuing our considerable sports car success."

Petty, eldest of the NASCAR entrants at age 48, may be on the threshold of a second racing career – depending on how he fares in the Rolex 24. Petty has competed in the race before but without a great deal of success.

Both Allmendinger and Braun, the latter the NASCAR Camping World Truck Series 2008 Raybestos Rookie of the Year, will drive Ford Riley entries for Michael Shank Racing, which won the final two races of the 2008 campaign. The Allmendinger/John Pew/Michael Valiante/Ian James car was second in recent testing.

“We’ve been close so many times that we just want to go out and get the job done," said Allmendinger, who qualified second for the 2008 Rolex 24.

Braun became the youngest Daytona Prototype winner when he won the 2006 Daytona Brumos 250 at age 17. “I feel like we’ve got a great shot at winning the race because this is a group of smart, fast drivers," he said. Braun will share driving duties in the No. 60 car with 2008 Rolex 24 pole winner Ozz Negri, Ryan Hunter-Reay and Mark Patterson.

Buckler’s The Racer’s Group will make an all-out assault of the Rolex 24’s GT category entering five Porsche 911 cars. TRG won the GT class in 2002 and, a year later, captured the Rolex 24 at Daytona overall. The team has won 24 times in Rolex GT competition, winning championships in 2005-06.

The Petaluma, Calif.-based team added a NASCAR Camping World Truck Series victory to its resume in 2008, winning the Ohio 250 at Mansfield Motorsports Park.

“I think this year we will have one of the best opportunities to win (the Rolex 24) that we have had in a few years," said Buckler. Two of his drivers, Justin Marks and Andy Lally, saw action in the NASCAR Camping World Truck Series last season. Lally plans to compete in next month’s NASCAR Camping World Truck Series 2009 season-opening NextEra Energy Resources 250 at Daytona.