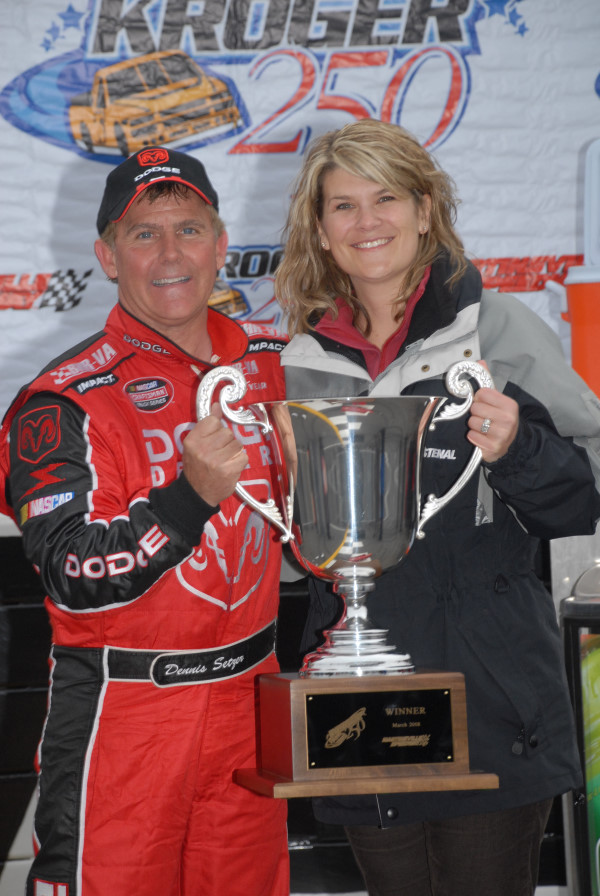 "This win right here is for Bobby Hamilton only — he is the man!" shouted crew chief Marcus Richmond after Setzer, who had run 173 laps since his final pit stop, crossed the finish line with trucks wrecking in his wake.

Setzer's victory in the Kroger 250 NASCAR Craftsman Truck Series race Saturday at Martinsville Speedway was his third at the .526-mile short track and the 18th of his career. Setzer won for the first time since taking the checkered flag at Mansfield on May 26, 2007.

"I ran second to Bobby Hamilton the year he won the championship (2004)," Setzer said. "We raced really hard against each other, but off the track, we were the best of friends. I don't think we ever had a harsh word for one another. I respected him a lot."

The 15th and final caution of the race on Lap 248 necessitated a green-white-checkered-flag finish that took Saturday's race three laps beyond its scheduled distance. As Setzer rounded Turn 3 on the final circuit, Kyle Busch powered his No. 51 Toyota beneath the second-place No. 23 Toyota of Johnny Benson as the trucks entered the corner.

Busch's truck clipped Benson's and both spun out of control. Matt Crafton dodged the wreck to finish second, and Rick Crawford came home third. Ken Schrader inherited fourth place and Erik Darnell fifth, as Benson and Busch dropped to 25th and 26th at the finish, respectively.

"Kyle drove in underneath that 23 and wheel-hopped it and opened the door for me," said Crafton, who had an up-close view of the accident. I kind of shut my eyes and went through the middle. In Kyle's defense, he wheel-hopped and got sideways, and that's why he wrecked the 23."

Setzer took the lead on Lap 128 when Brent Raymer spun in Turn 4 in front of Busch, who had surged past teammate Denny Hamlin on Lap 97 and stayed in front until the mishap with Raymer. Setzer remained in the lead the rest of the way, through nine more cautions that helped him stretch his fuel mileage.

Notes: Martinsville Speedway president Clay Campbell is part of the ownership group for Bobby Hamilton Racing, which relocated from Nashville, Tenn., to Martinsville after Hamilton's death. . . Busch retained the series points lead by 35 over Todd Bodine, who finished 12th Saturday.