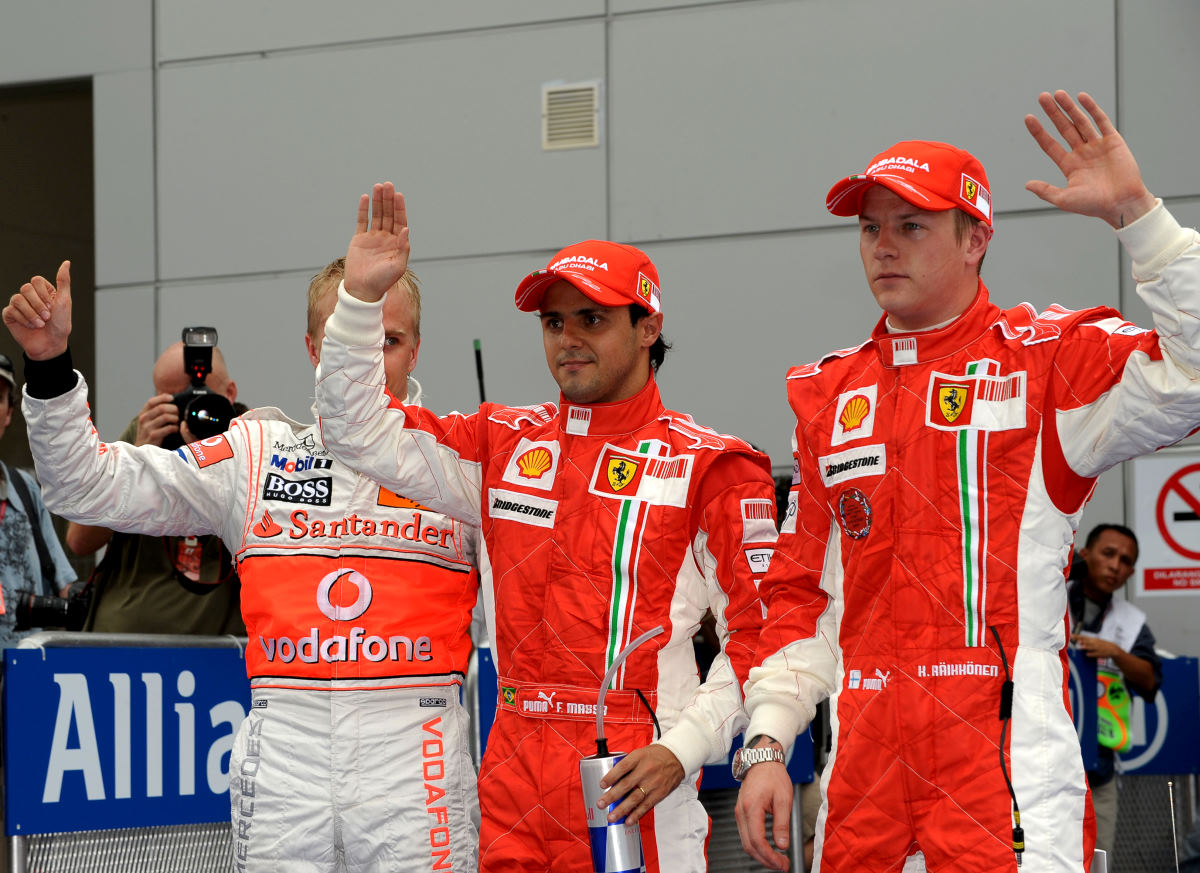 Both Ferraris will start the Malaysian Grand Prix at the Sepang circuit from the front row. Felipe Massa set the best time in Q3 and alongside him on the grid will be Kimi Raikkonen. However, it is thought that Massa is carrying less fuel as Raikkonen was faster in Q2.

The McLarens of Heikki Kovalainen and Lewis Hamilton were supposed to fill the 2nd row with Jarno Trulli's Toyota in 5th ahead of the two BMWs. However, both McLaren drivers have been docked five places on the Sepang grid after stewards found them guilty of impeding in qualifying for the Malaysian Grand Prix.

This is the seventh pole from ten starts at this circuit for Scuderia Ferrari Marlboro and it brings the Scuderia's overall total to 196.

Massa took his tenth pole of his career, the second one in a row at this circuit.

"Today we worked well and up to our usual standards and the results prove it," commented Stefano Domenicali.

"We have now made just a small step in terms of the Grand Prix with the longer one still needing to be accomplished in tomorrow's race. If all elements – team, drivers, cars – work at their best, then we can aspire to a good result. Congratulations to Felipe, who really produced an exceptional qualifying lap."

McLaren's Ron Dennis made the point that the team expected a stronger Ferrari, after the rout in Melbourne.

"We are comfortable with out race strategy," he said.

After the qualifying was that neither Felipe Massa nor Kimi Raikkonen seemed particularly thrilled at the result. and the expressions on their faces showed it (see photo above). Normally, Felipe would be rather giddy of the result. Perhaps he got word that the rumors may be correct regarding Sebastien Vettel being signed by the team.

"Our championship is starting now," Massa remarked as serious Massa. "What happened in the last race was incredible. Now we can manage to put everything together to have a very consistent, good and quick championship."

"We were hoping to do a couple of places better," said Kovalainen, "but Ferrari have been very fast all weekend. We had nothing more to give. Third place was the best we could achieve today. We didn't see the true pace of Ferrari in Melbourne. This is more representative a read between the pace of the teams."

It was interesting also to see both Raikkonen and Hamilton working very hard to try to warm their tires before their final runs.

"There did not seem to be as much grip in the tires during the final session," Lewis said. "I struggled a bit. It was tough finding a gap in the traffic, which had an effect on my ability to warm up the brakes and manage the tires. To be honest I didn't do a perfect job today and I will study the data to see how I can go faster tomorrow. We have to stay positive."

The BMW Saubers were not as quick as they seemed to be in Australia but they were still in a good position with Robert Kubica sixth and teammate Nick Heidfeld seventh.

Mark Webber was eighth quickest in his Red Bull but his teammate David Coulthard was 12th on the grid.

Renault was ninth and 13th with Fernando Alonso ahead of rookie teammate Piquet. The cars were still a long way from the top runners. For Piquet the performance was an improvement over his disastrous result in Melbourne last weekend.

Rains was forecast by some for Sunday and in the evening it began to rain on Sepang.

FERRARI
After the Melbourne debacle, the Italian team is the class of Sepang, with Felipe Massa on pole by half a second, and both F2008s well clear of the McLaren pace in Q3. "I was not able to get the tires to work as well as possible," said Kimi Raikkonen, who is second.

TOYOTA
Due to the demotion of the faster McLarens, Jarno Trulli will start the race from third place. Timo Glock is off the Italian's pace but still made the Q3 cut.

BMW-SAUBER
Nick Heidfeld, who topped the morning time sheets, angrily complained to the stewards after qualifying that both McLarens impeded his last flying lap as they cruised at slow speed to save fuel back to parc ferme. Several hours later, the stewards agreed and docked them five grid places each, thus promoting Heidfeld from seventh to fifth. Robert Kubica's best lap was a few hundredths faster.

RED BULL-RENAULT
The stewards let the team qualify following David Coulthard's suspension-shattering incident on Friday, and Mark Webber duly drove the RB4 to a credible eighth quickest (sixth on grid). Coulthard did not make it through to Q3.

RENAULT
Fernando Alonso, who like Heidfeld complained about the impeding McLaren drivers, could not keep up with the proper pace once he made the Q3 cut and started carrying a bigger fuel load than many of his rivals. Nelson Piquet, thirteenth, has had a better weekend than Melbourne, observing that he is "not too far away from my teammate" in Malaysia.

MCLAREN-MERCEDES
The MP4-23 is clearly the second quickest car in Malaysia, but the gap to Ferrari seemed significant after qualifying. Lewis Hamilton has struggled to keep up with his teammate Heikki Kovalainen all weekend and qualified fourth, but both racers fall five places down the grid after stewards found them unintentionally blocking the flying Heidfeld and Alonso on the racing line as they conserved fuel at the end.

HONDA
After such an uncompetitive winter, Jenson Button was delighted to so narrowly miss the Q3 cut, and Rubens Barrichello was a few tenths behind. The Brazilian had a broken sixth gear repaired in the morning, but the FIA rules allowed its repair without falling foul of the four-race gearbox rule.

TORO ROSSO-FERRARI
After a good outing in Australia, Sebastian Vettel never looked like making the Q3 cut, but he had a better day than his teammate Sebastien Bourdais, who dropped out in Q1 with a brake failure. Earlier in the day his Ferrari V8 failed, so the Frenchman has now used up his 'penalty-free' engine change for the season.

WILLIAMS-TOYOTA
Nico Rosberg sprayed champagne on the podium one week ago, but he came crashing to earth in Malaysia, qualifying an abysmal sixteenth. "Can't believe it," said the German, who lost time in the morning with an hydraulic leak. "Our car doesn't seem to like the new asphalt they laid on this track at all." Kazuki Nakajima dropped out in Q1, and moves right to the back of the grid because of his Melbourne penalty for crashing into Robert Kubica.

FORCE INDIA-FERRARI
The Silverstone based team again failed to reach its target of reaching Q2, but Giancarlo Fisichella did come tantalizingly close – half a tenth – to beating Barrichello's time. Also to the Roman's credit, he has so far in 2008 proved clearly quicker than his highly rated teammate, Adrian Sutil.

SUPER AGURI-HONDA
It is situation-normal for F1's currently slowest team, but Takuma Sato did well to at least pip Sutil.