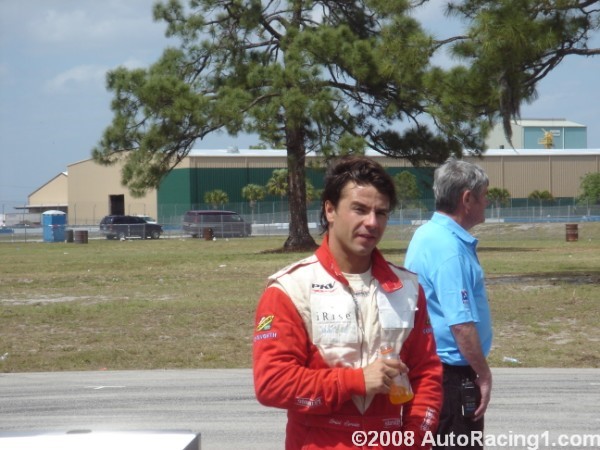 At KV Racing Technology, 30 crew members combined to work 5,460 hours in the 14-day period from when they took delivery of their IndyCar Series Dallara chassis and when the team's truck departed for Sebring International Raceway.

The hard work paid off as drivers Oriol Servia and Will Power combined to turn more laps, 96 and 77 respectively, than any other drivers in the first test of the new equipment. Power was the fastest of the day, recording a best lap of 52.9685 seconds, 113.501 mph on the 11-turn, 1.7-mile circuit.

KV Racing Technology is one of three teams, along with Dale Coyne Racing and Conquest Racing, that tested at Sebring March 19 in preparation for their transition to the IndyCar Series. They will test again on March 20 before heading to the oval at Homestead-Miami Speedway for two days of testing March 24-25. The 2008 season opens at Homestead-Miami on March 29.

"It was good to go run around today and get back into form, because I haven't driven for five or six months – since Mexico City," Power said. "It's good for driver fitness. It's really good to have a run like this before I get on the oval, which I've never done before.

"(The car) is pretty similar to the Champ Car. They run on the same tire; similar weight, similar wheel base, a little less horsepower and not as much grip, but it's a car and therefore you try to make it go as quick as you can."

Servia and Power were the first drivers on track in the morning. Dale Coyne Racing's Bruno Junqueira got on the track before the lunch break while his teammate Mario Moraes and Conquest's Franck Perera and Enrique Bernoldi began turning laps in the afternoon.

The six drivers combined for 276 laps with the only incident coming late in the day when Moraes' No. 19 car had a suspension failure.

"It's been very busy," team owner Dale Coyne said. "The guys have worked great. They've worked really long hours. In the last couple of days we're working three shifts a day, and those guys are pulling a triple. So it's been really great for what they've done to get here.

It's hats off to all those guys for everything that they've done the last few days and continue to do to get ready to at least get some shake down on the car here, and a little more experience for Homestead."