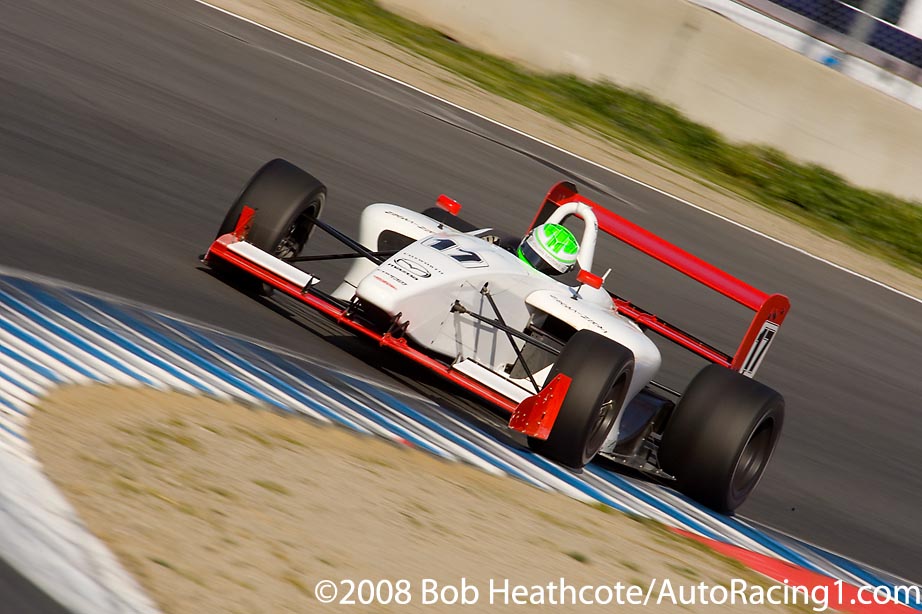 Driving the No. 17 Genoa Racing machine, Cameron logged a best lap at 1:15.447 (106.788 mph) in Tuesday’s morning session, which held up through the fourth and final session of Spring Training on Tuesday afternoon and turned out to be the quickest lap of Spring Training. It was an impressive outing for the 2007 Star Mazda champion, who was also quickest on Monday. The results of this test will undoubtedly be helpful as he looks to secure his program for the 2008 season.

“It’s great momentum," Cameron said. “I struggled a little bit in Sebring and some of the other tests so far. It was great to get a bunch of momentum and do really well, and to prove that we’re going to be really quick the whole year. I’m still looking to finalize something for the rest of the season, but it was really, really productive. Most of the changes we made yesterday and all morning, we were getting faster and faster. This afternoon, the track was a bit strange. It was kind of going back and forth, with a lot of cloud cover coming on and off and a number of red flags and stuff like that. I don’t really feel like we had a great run in the afternoon, but we still weren’t terrible. We weren’t quickest in the afternoon session, but we were quickest overall. It’s been a really good two days. We’ll see where the next test ends up being, but even so, it’s a great bit of momentum to put everything from last week behind me and start moving forward and driving again. I’m sure looking forward to Long Beach now."

For the second consecutive day, Carl Skerlong was second-quickest in the No. 28 PCM/USRT ride with a lap at 1:15.812 (106.273 mph). Skerlong’s best lap of the day—and Spring Training—also came during Tuesday’s morning session, but he also managed to run the quickest lap in the final session of the day. The second-year driver will be teamed with Frankie Muniz on the two-car PCM/USRT operation for the 2008 season.

“I thought we couldn’t ask for a better test yesterday, but today kind of took that statement back," Skerlong said. “We were always at the top of the charts and we never really left the top three. At the end of each session, we were always top three. This afternoon, we ended up on top, which was a good way to end the test, for sure. We learned a bunch and I really can’t wait to get to Long Beach. The team dynamics are growing so much day-to-day. The personal relationships and the relationships at the track have really been an amazing feat considering the lack of time that we’ve spent together. I’m really excited for Long Beach."

Canadian rookie Daniel Morad also made a great impression in his second Atlantic Championship test session, logging the third-quickest lap of Spring Training in the No. 70 machine for the new Eurointernational team. Morad’s best lap was 1:15.906 (106.142 mph). He won the 2007 Formula BMW USA championship with Eurointernational and will be joined on the two-car team by Italian rookie Edoardo Piscopo.

“We’re definitely really happy," Morad said. “Coming into this test, we were really just scrambling all over. It really was a last-minute deal to put the whole team together. My engineer really helped us out a lot. He made the cars pretty much perfect, and that’s what you need to go quick here at Laguna. It was definitely a new experience for me driving at Laguna. It’s different from any other track. There’s a lot of elevation and a lot of blind corners. It’s really tricky, but in the end, we went P3. It can only get better from here. This is only my second test. I’m just looking for the next couple of events."

Dutchman Junior Strous ended Spring Training in fourth place on the time chart with a best lap at 1:16.026 (105.974 mph) in the No. 6 Condor Motorsports/Team Holland entry. Filling out the top five was Canadian driver James Hinchcliffe with a lap at 1:16.084 (105.893 mph) in the No. 3 Forsythe Racing Inc. machine. The top-nine drivers in Spring Training were covered by less than one second.

Next up for the Atlantic Championship is the 34th Toyota Grand Prix of Long Beach on March 18-20, which will open the 12-race 2008 season.