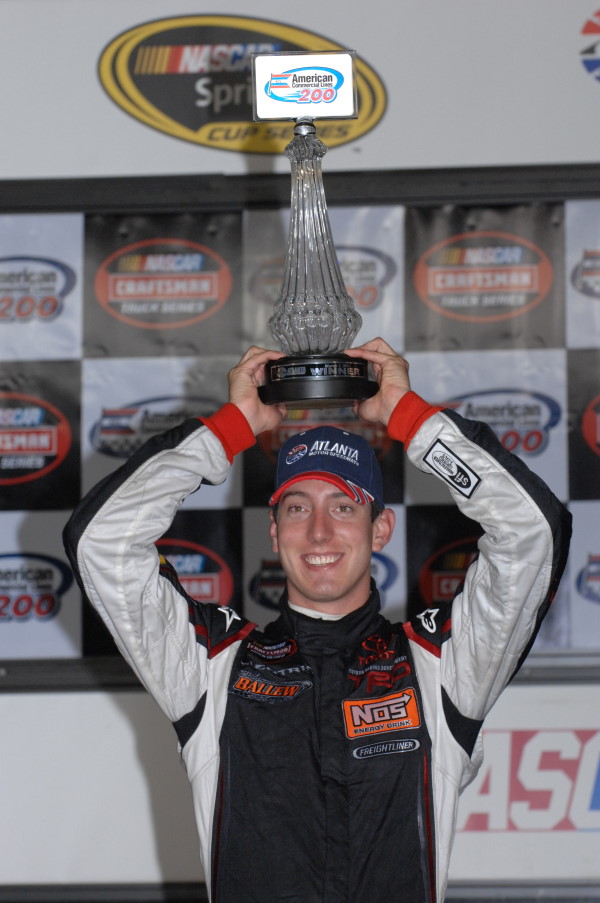 Benefitting from an astute call from the pits, Kyle Busch held off Ron Hornaday Jr. on Friday night at Atlanta Motor Speedway to win the American Commercial Lines 200, the second straight victory for the NASCAR Craftsman Truck Series points leader.

After a stoppage for rain lasting almost 10 minutes, Busch restarted in the lead with four laps remaining in the 130-lap event at the 1.54-mile speedway. Busch pulled away to win by 1.116 seconds over the defending series champion.

The win was Busch's eighth in the series, and it was his fifth straight truck series race with a finish of first or second.

The call of the race came on lap 112, when crew chief Richie Wauters brought Busch into the pits for tires during the third caution of the race, after rain slowed the proceedings on lap 111. That forced Hornaday to come to the pits with the other leaders a lap later.

When the field restarted on lap 116, Busch was third but quickly dispatched Crafton and McCumbee through Turns 3 and 4.

"That baby was evil-loose — it was all over the place," Busch said of the handling of the No. 51 Toyota early in the race. "But we got it handling really well on that last pit stop, and from that point on, it was a rocket ship."

Wauters said the call to pit wasn't that difficult.

"It wasn't that tough when you've got Kyle," Wauters said. "We knew we had a better truck on new tires. The only way to win the race was to come in for tires."

Hornaday's No. 33 Chevrolet was dominant on long runs, but in a four-lap dash to the finish, he had to settle for the runner-up finish.

"I'll tell you in one word, 'Second stinks,'" Hornaday said. "I don't know how he (Busch) can drive that thing that far out of control. I knew if we had a short run, he was going to get me. But we'll take second. It was a good points day, but it's a shame — this thing was fast."