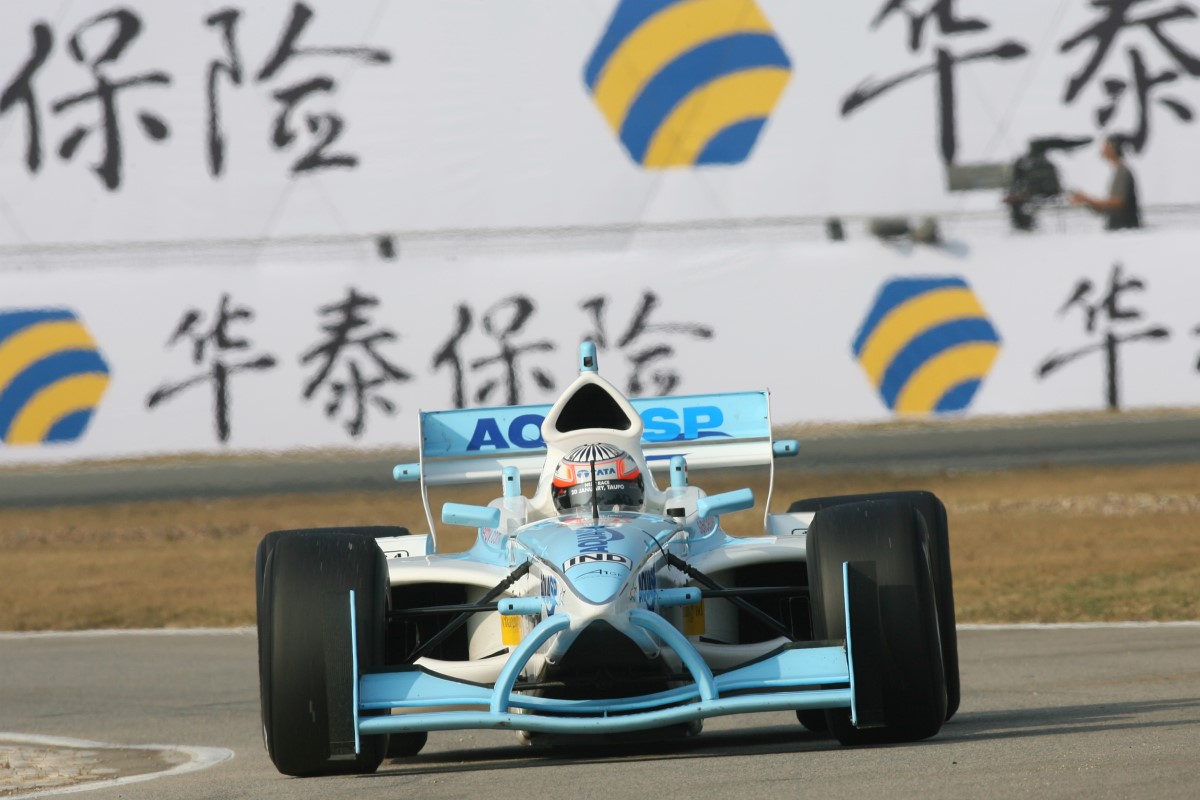 China – A1 Team India's Narain Karthikeyan made history today when he took his and the team's first ever A1GP race win in this afternoon's incident-packed Feature race at China's Zhuhai International Circuit. Karthikeyan was joined on the podium by New Zealand's Jonny Reid, who started from 10th on the grid, and South Africa's Adrian Zaugg in third.

The 30-year-old Indian driver, who started from third on the grid, took the lead from New Zealand during the second pit stop window on lap 29 and, despite a huge amount of pressure and some excellent racing from Reid, Karthikeyan held off Black Beauty and went on the cross the line in first place and score India's first A1GP win in the history of the sport.

South Africa's Zaugg also enjoyed a strong race to take the final podium position, having started from ninth on the grid. Zaugg was under attack from Germany's Michael AmmermÃ¼ller during the last 10 laps of the 45 lap race but the 21-year-old South African pushed hard to take third place ahead of the German rookie who ultimately finished fourth.

Fifth place was taken by Great Britain's Oliver Jarvis, who got away well from second on the grid and snatched the early lead from pole sitter Switzerland as Brazil, Ireland, Canada and Malaysia were all involved in an incident behind them at turn one, bringing out the safety car for four laps. Fast work in the pits during the first pit stop window allowed Switzerland to steal the lead when they rejoined the action while GBR fell back to sixth place.

Having enjoyed an early lead, the British and Swiss teams were both hampered with delays in their second pit stops due to technical issues, ultimately finishing in fifth and sixth positions respectively. Despite a disappointing finish, GBR's Jarvis was clearly pushing hard, picking up a bonus point for setting the fastest lap in the Feature race on lap 29.

France, who finished the race seventh, was hit with a drive through penalty on lap 16 due to releasing their car unsafely from its first pit stop. As he drove past the USA pit box, Loic Duval caught the hose connected to one of the airguns causing a USA mechanic to be pulled to the ground.

Tomas Enge, making his A1GP race return for the Czech Republic after an absence of 10 months, had a superb afternoon, racing from 16th on the grid to finish a solid eighth.

Home nation China's CongFu Cheng, who was running in sixth place on lap 31 after the second round of pit stops, fell down the order to 10th after taking a drive through penalty for speeding in the pit lane. The Chinese star was determined not to give up, charging past USA with five laps remaining and finally crossing the line in ninth place, picking up two valuable championship points, moving the team up one position in the overall championship standings.

Netherland's Jeroen Bleekemolen was forced out of the action on lap nine due to a puncture caused by suspected suspension failure at the final corner while 12th placed Portugal received a drive through penalty on lap five for making a false start.

Narain Karthikeyan, who made history today by scoring India's first ever A1GP win, praised his team's brilliant work in the pits:

'The team has been working really hard at pit stop practices and they've done a really good job this weekend. Both the pit stops were excellent and we got ahead but unfortunately I got stuck behind Pakistan on my out lap so I couldn't push but I came out just ahead of Jonny. There was a lot of pressure towards the end but then his tires went off as well as mine and then we were equal – after that I just got the job done.'

Jonny Reid, who raced from 10th on the grid to finish a superb second, was delighted with New Zealand's team work this weekend:

'It was a fantastic team effort. Obviously I'm very pleased to come from P10 on the grid and having struggled in qualifying to threaten for the win in the end. It's a credit to the team. My in laps were good, my out laps were good, and there were a few mistakes from my side of the fence so overall I'm very pleased with the whole team this weekend. Fantastic effort.'

'I was quite surprised myself that we had the pace to finish on the podium. We were quite strong from the beginning of the race and passed quite a few people, Great Britain was one of them. He (Oliver Jarvis) made a slight mistake into the second last turn so I got a good run down the straight and passed him into the last turn. It was really good racing.'

Switzerland has extended its championship lead to 79 points, 19 ahead of second-placed France on 60, closely followed by New Zealand just one point behind in third place on 59 points.

The championship now takes a five-week break before heading to New Zealand for round five in Taupo, marking the first race of the New Year on 18-20 January 2008.

Fastest lap: A1 Team Great Britain set the fastest lap in the Feature race, lapping Zhuhai International Circuit in 1m24.703s with a speed of 183.6 kph on lap 29 of the 45 lap race.