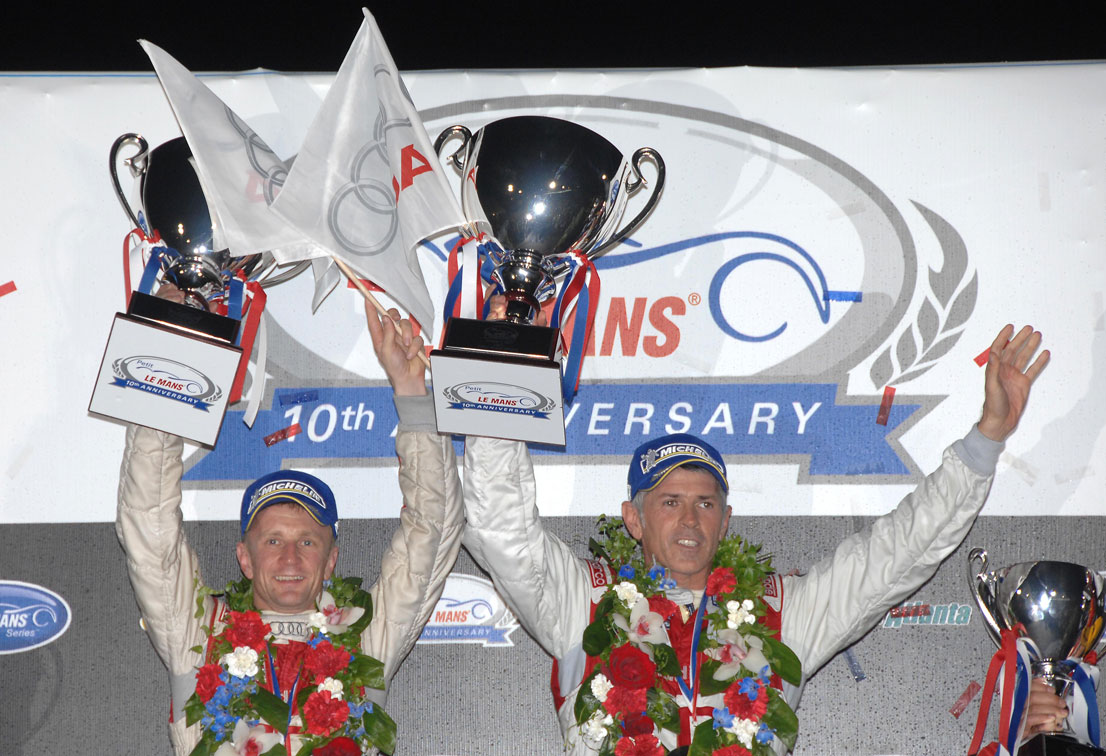 After 1,000 miles and 394 laps, it came down to just 0.923 seconds between the premier teams in sports car racing. This time, the moment belonged to Dindo Capello and Allan McNish as Audi remained unbeaten at Petit Le Mans with diesel power.

Capello passed Penske Racing’s Romain Dumas at the nine-hour mark down the backstretch and used the torque and power of the Audi R10 TDI to win the 10th running of the American Le Mans Series cornerstone event at Road Atlanta. McNish and Capello captured the first overall victory for Audi since St. Petersburg in March and completed another Audi sweep of the world’s premier endurance events: Sebring, Le Mans and Petit Le Mans.

The margin of victory was the closest in the race’s 10 years.

“This one meant a lot more to us, partly because we have been very close to winning overall in quite a few of the past races but it managed to slip away," McNish said. “It is one of the hardest races we’ve had and certainly in my eyes the best race Dindo ever has had. This whole season has been a team effort. Audi has never sat back. This is what we’re here to do – win outright."

Capello’s drive also was a championship-winning one as he and McNish claimed their second straight LMP1 drivers title. Audi now has won 21 consecutive races in class.

A caution period with 40 minutes left wiped out what had been a 30-second lead for Dumas and his Porsche RS Spyder. The Porsche and the Audi were separated by just five seconds and four cars when the green flag dropped. It took Capello eight minutes to make the winning pass.

“His pace was so strong that it didn’t let me relax," Capello said. “I only realized when I crossed the line that I knew Romain was the closest car to me. If the yellow had not have come out, I don’t think I could have caught him. He had a very good pace. In the second half of the race, they became very, very fast and gave us a hard time."

Dumas, Timo Bernhard and Patrick Long won in LMP2 but it could have been a landmark win for a Penske and Porsche effort that had taken the previous eight overall wins. It very well could have been nine were it not for the last caution period.

“The target was to do 70 percent of the race to take the points for the championships," Dumas said. “Unfortunately the safety car came out and took away our gap. We won Mosport with luck and today the luck was on the other side. I tried to keep pressure on Dindo. It was a great race and a good race."

Dumas drove the last hour on a single set of tires and tank of fuel in a heroic effort that also clinched the P2 championship for the two Porsche factory drivers. It is the first for Dumas and second for Bernhard.

“I knew that when we first drove together in 2005 that we could win a title," Bernhard said. “We were close that year. In 2006 we were winning a lot of races and this year at the beginning we said we wanted to win it and that was the goal. We had a terrific year. With five class wins in a row, it’s a perfect year.

“The car was perfect and it was an exciting race for the fans," he added. “They saw a race for 10 hours that was very close and it was a very good day for the sport."

Dumas finished eight laps up on the No. 20 Dyson Racing Porsche of Chris Dyson and Guy Smith, who recorded their best finish of the season. Third in class and fourth overall was the factory Zytek No. 5 of Jan Charouz, Stefan Mucke and Danny Watts.

Next was the No. 88 Creation Autosportif entry of Jamie Campbell-Walter, Harold Primat and Christophe Tinseau, which finished second in P1.

Oliver Gavin and Olivier Beretta wrapped up their third straight GT1 championship with a class victory in the No. 4 Corvette C6.R with Max Papis. The trio survived the carnage as both the No. 3 Corvette and Lista Doran Racing’s pole-sitting Maserati MC12 went out of the race with accidents.

“At the start of the race I was behind Jan (Magnussen) which was interesting because we had a pretty good race until he was punted by the 26 car," Gavin said. “From then on we were managing ourselves against the Maserati. The traffic was suicidal at some points today, people making some bold moves. Fortunately everyone in the No. 4 car kept it on the road."

Gavin, Beretta and Papis repeated their 12-hour win at Sebring with a smooth and consistent run. Their scariest moment was a tap by the No. 2 Audi going through the Esses which sent the Audi off track and into the outside wall.

“Today was a very tough day in terms of traffic," said Papis, who was in the Corvette at the time. “We had our plan set up in the beginning and drive as hard as we could to fight with the No. 3 car. I was pretty upset when I saw the accident with Jan and my semi-accident with the Audi. There is no room to pass there and there’s no way you should stick your nose in there. I think the prototype driver was caught out by the speed of the Corvette. We have corner speeds that are similar to some of the prototypes. I was pretty disappointed to see the situation."

Flying Lizard Motorsports led a Porsche parade in GT2 as JÃ¶rg Bergmeister, Johannes van Overbeek and Marc Lieb drove the No. 45 Porsche 911 GT3 RSR to a three-lap victory over the Tafel Racing entry of Dominik Farnbacher and Wolf Henzler.

Compared to the rest of the field, it was a pretty calm day for the Lizard trio. It wasn’t involved in any incident and ran a consistent pace throughout while other teams fell by the wayside. It was especially rewarding after a catastrophic race at Detroit that saw the car destroyed by fire.

“Petit is one of the big classics that every sports car team would like to win," van Overbeek said. “We’ve been on the podium before and to get this one is fantastic. The team rebuilt the car after the fire and a lot of credit to the team for that. It’s a new tub and its transit started before the end of the race at Detroit so thanks to Porsche."

The victory for the Lizard Porsche and the sixth-place finish for Risi Competizione’s Jaime Melo and Mika Salo means that the GT2 championship will go down to the wire at Mazda Raceway Laguna Seca. Melo, Salo and Johnny Mowlem were leading much of the first half of the race until an electrical problem with the Ferrari F430 GT’s brake lights.

Ralf Kelleners, Tom Milner and Graham Rahal placed third in class Saturday in Rahal Letterman Racing’s Porsche after running second on the final lap before spinning. Milner finished a lap behind the Tafel car. The top five cars in class were Porsches.

“Our car performed pretty well here thanks to the long straights," said Bergmeister, who won at Petit Le Mans for the fifth year in a row. “Laguna is going to be a lot tougher than here because it suits the Ferrari very well. I don’t think it looks like we can win the driver championship."

The final round of the 2007 American Le Mans Series is the Monterey Sports Car Championships at Mazda Raceway Laguna Seca. The four-hour race is scheduled for 2:30 p.m. PT on Saturday, October 20. SPEED will air the race live from 5:30 to 10 p.m. ET. Live coverage from American Le Mans Radio and IMSA Live Timing and Scoring will be available at americanlemans.com.