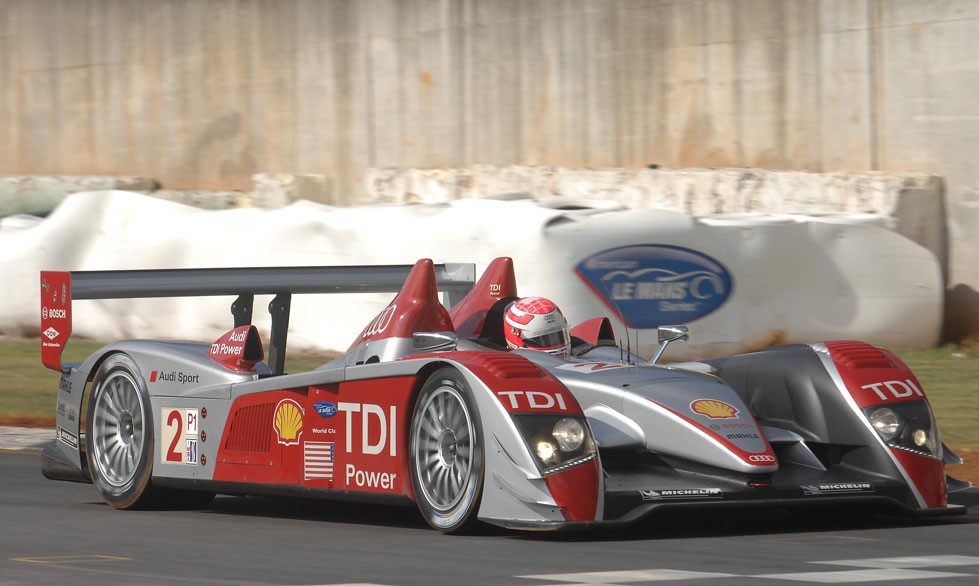 Marco Werner rewrote the history books at Road Atlanta on Friday with a record-breaking qualifying run for Audi in its diesel-powered R10 TDI at Petit Le Mans. Werner set a time of 1:08.906 to capture pole position for the 10th running of Saturday’s 1,000-mile/10-hour endurance classic, a race that Audi has never lost.

As expected, qualifying times were well under Allan McNish’s previous mark of 1:10.379, set in 2000 in an Audi R8. The fastest six cars Friday all were under McNish’s former mark as the field attacked Road Atlanta’s freshly paved surface. Werner outpaced Penske Racing’s Romain Dumas by 0.133 seconds for pole position.

Werner’s only other pole position this season came in March at Sebring, the American Le Mans Series’ other signature endurance race. Audi hasn’t won an overall Series event since St. Petersburg, the second race of the season. Certainly no other event shapes up better for Audi than Petit Le Mans, at least at the outset.

“For us it is very important to win another race overall," said Werner, who will team with Emanuele Pirro. “This is a very important race and a big event. It would be very big and very nice to break Porsche’s string. Long races I hope are the right direction for us. I hope it ends that way tomorrow."

The crew of the No. 2 Audi has had to do significant work to the car the past two days. Pirro went off the track at Turn 1 on Thursday and impacted the wall hard, necessitating front and rear suspension repairs. Pirro went off again in the Esses during Friday morning’s wet session, which knocked the rear wing slightly askew. The crew went to work again and had the car fixed well ahead of qualifying.

“We changed the setup completely and it was difficult for me during qualifying," Werner said. It wasn’t nice that we lost that time in the practice and did it right in front of qualifying. Normally you don’t do that but we have to do what we have to do."

Dumas was the quickest LMP2 car at 1:09.039 in the No. 7 Porsche RS Spyder to break Lucas Luhr’s mark from last year by more than two seconds. The Frenchman and Timo Bernhard have won the last four overall races in the American Le Mans Series.

“It was a strange qualifying," said Dumas, who will drive with Bernhard and Patrick Long. “The track was a little green and the car was not so bad. I pushed really hard but lost some time on the track because I was too slow through one of the corners. I am glad we are nearly on pace of the Audi."

Dumas and Bernhard lead the class championship heading into Petit Le Mans. If the leading duo finish at least 70 percent of the race, they will clinch the championship. They also will take the crown if they fail to score any points and Briscoe and Maassen finish fifth or worse.

“We want to try to take points for the championship. That is the main goal," Dumas said. “We will wait and see tomorrow. It will be very difficult for us to win overall. We saw two weeks ago during testing that the Audis are very strong. The gap today is smaller between us than two weeks ago and it is always nice to start on the front row."

Andrea Bertolini shocked the field with a GT1 pole run in Lista Doran Racing’s Maserati MC12. Bertolini, making his first start in the Series since the season-ending event at Mazda Raceway Laguna Seca in 2005, posted a lap of 1:17.428. He was nearly a full second better than Corvette Racing’s Johnny O’Connell, the hometown driver who toured the track in 1:18.415. He will team with Jan Magnussen, with whom he has won the last two GT1 races, and Ron Fellows.

Third was the second Corvette of Oliver Gavin, Olivier Beretta and Max Papis. Gavin posted a lap of 1:18.602.

“It's a very important day for me and for the team, but especially for Maserati," Bertolini said. “I like the car, I like the team, I like Road Atlanta and I like our Michelin tires. We made a very long run yesterday with the tires, and they have proven to be very consistent."

Bertolini raced full-season in the factory Maserati effort in the American Le Mans Series during the 2005. He finished third in class twice (at Road Atlanta in the spring sprint race and at Road America) and was fourth at Petit Le Mans. His lap Friday was the first non-Corvette GT1 pole position since Monterey last year.

“It was a little slippery, but we have a good balance with our car," Bertolini said. “At first we had too much oversteer, but we came in and made an adjustment and that allowed us to improve our lap time. The race is a different challenge. We remain focused on our primary goal, which is to finish."

Jaime Melo captured his fifth GT2 pole this year for Ferrari and Risi Competizione. The Brazilian driver piloted the No. 62 Ferrari F430 GT to a 1:21.660, good enough for a 0.138-second gap back to Dirk Muller in the Petersen Motorsports/White Lightning Racing Ferrari.

“I fought quite hard, and the 31 car was very close," said Melo, who will drive with Mika Salo and Johnny Mowlem. “I got a lot of traffic at the beginning so I couldn’t enjoy the new Michelin tires like I would like to do, but it’s OK because we are on pole. The race is very long and we have a good car so I’m looking forward to it.

The top five cars were separated by just 0.498 seconds with JÃ¶rg Bergmeister qualifying the No. 45 Flying Lizard Motorsports Porsche third in class. He and Johannes van Overbeek, who will drive with Marc Lieb, are the only drivers that can take the class championship from Melo and Salo. The leading duo has a
36-point advantage with 49 points remaining.

“The track surface had less grip than yesterday because of the rain we’ve had, and it changed the car’s balance a little bit as well but it’s the same for everybody," Melo said. “The important thing is that we are happy with the car and that’s good for tomorrow."

The 10th running of Petit Le Mans, the annual 1,000-mile/10-hour endurance classic at Road Atlanta, is set for 11:15 a.m. ET on Saturday, October 6. SPEED will provide live coverage from 11 a.m. to 1 p.m. and again from 6:30 to 10 p.m. American Le Mans Radio and IMSA’s Live Timing and Scoring will be available at www.americanlemans.com.